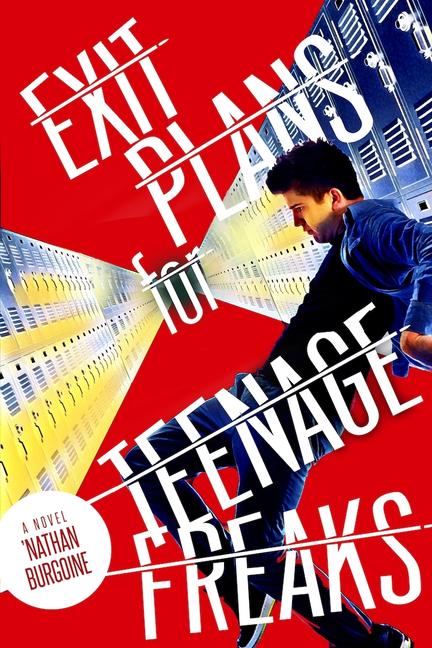 Being the kid abducted by crazy old Ms. Easton when he was four permanently set Cole’s status to freak. At seventeen, his exit plan is simple: make it through the last few weeks of high school with his grades up and his head down.

When he pushes through the front door of the school and finds himself eighty kilometers away holding the door of a museum he was just thinking about, Cole faces facts: he’s either crazier than old Ms. Easton, or he just teleported.

Now every door is an accident waiting to happen—especially when Cole thinks about Malik, who, it turns out, has a glass door on his shower. When he starts seeing the same creepy people over his shoulder, no matter how far he’s gone, crushes become the least of his worries. They want him to stop, and they'll go to any length to make it happen.

Cole is running out of luck, excuses, and places to hide.

Time for a new exit plan.

'Nathan Burgoine grew up a reader and studied literature in university while making a living as a bookseller. His first published short story was “Heart” in the collection Fool for Love: New Gay Fiction. This began his long love affair with short fiction, which has seen dozens more short stories published. Even though short fiction is his favorite, 'Nathan stepped into novel writing, and his first novel, Light, was a finalist for a Lambda Literary Award. Triad Blood and Triad Soul are available now from Bold Strokes Books, and more novels as well as works of short fiction are always under way.

A cat lover, 'Nathan managed to fall in love and marry Daniel, who is a confirmed dog person. Their ongoing cat-or-dog détente ended with the rescue of a husky named Coach. They live in Ottawa, Canada, where socialized health care and gay marriage have yet to cause the sky to cave in. You can find him online at apostrophen.wordpress.com.

Other titles by 'Nathan Burgoine

New and Amazing YA Reads for Teens

10 Books for Young People to Read with PRIDE