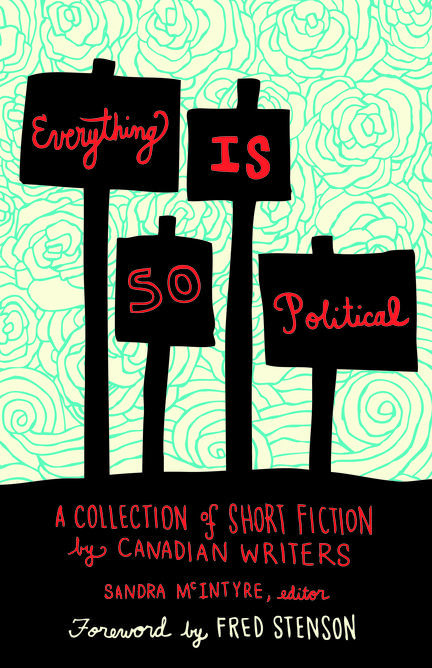 Brimming with wild imagination and stunning variety, this is one of those beautiful literary anthologies that comes along once a generation, that we’ll look back upon as the beginning of a whole new vision of Canadian fiction.”

The stories within Everything Is So Political explore the intersection between politics and the contemporary short story. From the overt to the subtle, this collection tackles a broad range of topics and themes, from women’s rights and Aboriginal culture to environmentalism, terrorism and totalitarianism. This is one of the few Canadian anthologies that focuses on political fiction, and it does so in a very powerful and artful way, flying in the face of readers, writers and critics alike who claim that writing with a political agenda occurs at the expense of literary quality.

Consisting of twenty short stories, this collection is proof that it is increasingly difficult, even impossible, for fiction not to be political. But make no mistake, the stories in this anthology are stories first: stories that are meant to be read, shared and enjoyed, but stories that will make you see things differently and question the world around you.

“Sometimes the political seems so ugly that we would like to take the high road and avoid it. Yet everything is political for a reason. Freedom is never safe from greed, be it for money or power. Democracy exists only in the exercise. Therefore, the more we know, the more we must tussle and spin.” — From the foreword, by Fred Stenson

SANDRA MCINTYRE is a freelance book editor and writer living in Calgary, Alberta. Previously, she was the managing editor of Nimbus Publishing in Halifax, Nova Scotia. Sandra edits fiction primarily and is currently at work on a historical novel.

But what about short stories with political themes? What isn’t political?

In culling the selections for this book, Calgary-based editor Sandra McIntyre writes that she often considered these questions. The result is a thought-provoking collection of politically themed short stories by emerging Canadian writers.

As McIntyre states, “People are political and everything has some connection to the public sphere.” Thus the implication of ambiguity and openness in interpreting the title.

Accordingly, the 20 stories encompass a wide range of topics, from social justice issues and violence to cultural displacement and fraught social connections.

Almost half of them take place in six of the Canadian provinces (though, sadly, not Manitoba, nor are any set here, which is odd given that the publisher is Winnnipeg-based). The remainder are set abroad: Northern Ireland, Bangladesh, Greece, Burma, England, Iran, Sri Lanka and Colombia.

Some stories focus on politics in the concrete sense. Stray Dogs by Ontario’s Andrew F. Sullivan is a chilling tale about a prison photographer. He performs his duties unquestioningly, until doubt sets in and leads to some tough decisions.

At the outset, his spare understated narrative captures his sense of emotional detachment, at the same time engaging the reader.

”I pick up the canister again, testing its weight in my hand,” the photographer says. “All those faces locked inside, waiting to be released in their new form. Like a flattened butterfly under glass.”

In Vancouverite Sherveen Ashtari’s Above Her Shook the Starry Lights, the female narrator is an Iranian prisoner awaiting the death penalty. In lyrical prose, she reflects on the past to come to terms with events that shaped the trajectory of her life.

”I was born a captive,” she proclaims, her 1979 birth date coinciding with Iran’s Islamic coup.

Several stories involve an element of danger. The Briefcase by Ethan Canter tells of a man who arrives at a bar where someone has mysteriously left a valise.

In Torontonian Matthew R. Loney’s piece, From the Lookout There Are Trees, a young man decides to hike alone in Burma, a military dictatorship where he unwittingly places himself at risk.

However, other stories focus on the politics of relationships, that is, politics “in the ‘soft’ sense — a phrase coined by McIntyre. In Grace Street, 1946, by Joan Baril of Thunder Bay, Ont., a young white girl befriends her First Nations classmate, much to the dismay of her mother.

In Star Spinning by Ontarian Catherine Brunet, a young female teacher on a northern reserve decides to quit her job after a year. The night before her departure, two students pay her a visit and offer fresh insights about life there.

An intriguing story of patriotism and friendship, Quitting Colombia by Mexico-based Jim Conklin, tells about a main character who spends his final night in Colombia at his favourite bar before immigrating to Miami. Meanwhile, an old friend who is known for causing trouble shows up at the bar that evening.

Also noteworthy are the ironic twists present in a few stories, such as the futuristic Gotcha! by British Columbian Jack Godwin, in which a talk show host in 2050 turns the tables on a celebrity from the past.

In Shane Joseph’s Suicide Bombers,” a Canadian discovers the difference between theory and practice when he strikes up a conversation with his seatmate, a professor specializing in research on terrorism.

That said, each story offers entertainment and food for thought to readers within a few brief pages.