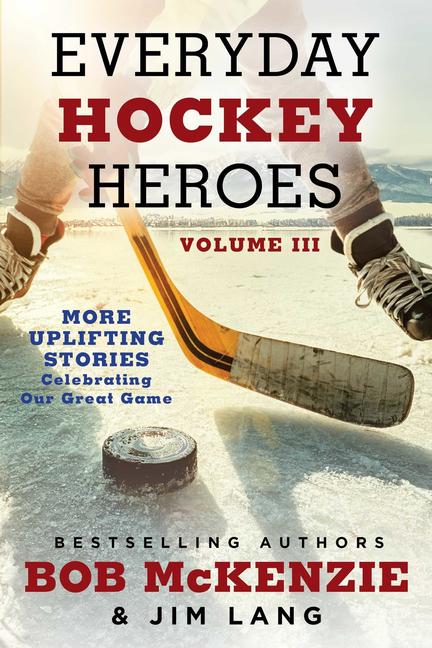 From TSN Hockey Insider Bob McKenzie comes a new volume of uplifting hockey stories about the everyday heroes who are breaking down barriers and shaping the future of a game they love.

In this heartfelt collection of personal hockey stories, Canadian broadcasters Bob McKenzie and Jim Lang bring together the remarkable voices of hockey players, coaches, families, and fans who have overcome adversity and are championing the game they love—on and off the ice.
Read about former Humboldt Broncos defenceman Logan Boulet, whose selfless organ donation helped six Canadians and motivated almost 150,000 people to register as donors in the following weeks. Meet players like Kelly Serbu, who didn’t let his visual impairment stop him from playing hockey and is now raising awareness and funds for blind hockey programs, or Kim McCullough, who founded Total Female Hockey to empower other aspiring female players. Follow players and coaches of colour such as Jim Paek and Jason Payne who are helping to break down barriers, and the hockey parents who are working to make the game more accessible.
These are the everyday heroes who are defying the odds and inspiring change.
Featuring extraordinary stories of tireless advocates and unbelievable successes, Everyday Hockey Heroes, Volume III is a celebration of the great game of hockey and the heroes—sung and unsung—found on rinks and in arenas across the country.

Jim Lang is a Canadian sportscaster, journalist, and the co-author of Shift Work and Bleeding Blue, two bestselling memoirs by Tie Domi and Wendel Clark. He hosts The Jim Lang Show. He lives outside Toronto with his wife and kids. Follow him on Twitter @JimLangSports.

“Hockey never ceases to amaze me with the quality of the people in the game. This book is full of hockey champions who will inspire you and show you the true depth of the people in and around this game.”
— BRIAN BURKE, former NHL executive

“Bob and Jim shed some fantastic light on a coast to coast truth: there are hockey heroes in every rink in Canada. Names like Westlake, St. Denis, Singh, Potvin, and Cunningham are what drives the success and our love of the game. Everyday Hockey Heroes reminds us that you don’t need to make a million to be a real hockey hero.”
— KEN REID, Sportsnet Central anchor and author of Hockey Card Stories 2

“Why do we like competitive sports? The drama, the stories, the heroics—the stories behind the game. McKenzie and Lang feature people who talk about their love of the game and how they’re championing the next generation—paying particular attention to those working to make it inclusive.”
— Toronto Star

“You can never truly know a country until you know the game that defines the people. The U.S. has football, Brazil soccer, India cricket. If you want to know Canada, or if you’re Canadian and want to know yourself, Everyday Hockey Heroes is for you. In these moving, inspirational, and entertaining stories, Bob McKenzie, the ‘Mr. Hockey’ of insight and analysis, and sportscaster extraordinaire Jim Lang have found the pulse of Canada—and the beat is as strong and healthy as ever.”
— ROY MacGREGOR, bestselling author of Wayne Gretzky's Ghost and The Home Team

“Compelling accounts of personal strength and the power of hope. Everyday Hockey Heroes gives a spotlight to important issues that people are dealing with and exhibits their ability to not only overcome these obstacles but, more important, to try to make positive change in the wake of them.”
— SHELDON KENNEDY, former NHL player and founder of the Sheldon Kennedy Child Advocacy Centre

“A second volume of stories about the unsung stars around your neighbourhood rink.”
— Ottawa Sun

“The Humboldt tragedy showed us just how much hockey is part of the Canadian community. Because, just as we share the joy hockey so often brings, that terrible moment in Saskatchewan taught us that together as a nation we comfort each other when the game, as it occasionally does, brings us pain. My friends Bob McKenzie and Jim Lang have a lifetime of stories from covering the great game, and these pages are wonderful evidence of what they’ve collected over the years. You’ll laugh at times, you’ll be inspired at times, and you may even cry as well, but through it all you’ll know that Canada is hockey and hockey is Canada. It really is our game.”
— PETER MANSBRIDGE, bestselling author of Extraordinary Canadians and Off the Record

“Inspiring. Truly hard to put down. Bob’s great storytelling abilities prove that hockey is so much more than just a game. Loved it!”
— DAVID CHILTON, bestselling author of The Wealthy Barber

“By seeing hockey at the margins, Bob McKenzie’s and Jim Lang’s work shines with a kind of log cabin storytelling, illuminating the sport’s humanity and showing that every path is crooked no matter where you end up in the game.”
— DAVE BIDINI, author of Keon and Me and member of Rheostatics

“These heartwarming stories illustrate the power hockey has to unite us and inspire us to be the best we can be.”
— JAMES DUTHIE, TSN Hockey host and bestselling author of Beauties

Other titles by Jim Lang

My Life with Type 1 Diabetes and Journey to the NHL

Giving My All for the Game