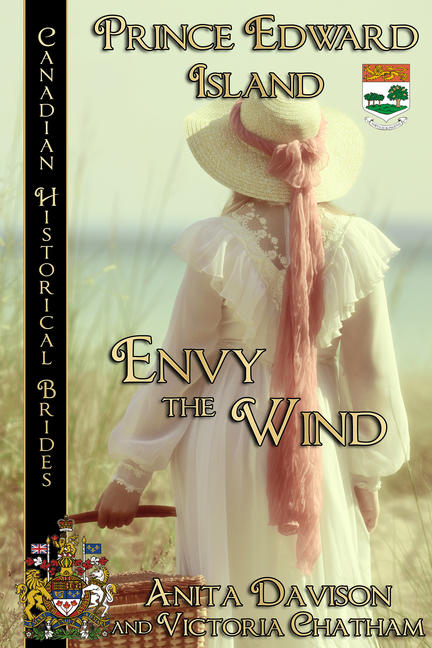 Grace MacKinnon’s widowhood promises little but a life of drudgery under her father-in-law’s oppressive rule. When quiet rebellion turns to opportunity, she books passage on an Atlantic steamer only to face near disaster in Halifax harbour. Her future looks doomed from the start until with the help of a sympathetic stranger, she arrives on Prince Edward Island. Her new-found independence drives her to undertake a brave new adventure in a male dominated world, and a chance encounter with Lucy Maud Montgomery brings her a surprising ally. Despite the challenges, Grace keeps her head and prevails, until an encounter with bootleggers during Canadian Prohibition threatens to topple her hard won success. Can Grace trust those she goes to for help, or as a woman alone in turn of the century Charlottetown are the odds stacked against her?

Born in London, Anita Davison connected with the history of that city at a young age. When the rest of the school trip were throwing the contents of their lunch boxes at each other, Anita imagined men in high white wigs, flared long coats and heeled shoes coming out of coffee houses, climbing into sedan chairs on the cobbles in Paternoster Row, where Christopher Wren was lowered down the outside of St Paul's Cathedral in a basket.

Being born in Bristol, England, Victoria Chatham grew up in an area rife with the elegance of Regency architecture. This, along with the novels of Georgette Heyer, engendered in her an abiding interest in the period with its style and manners and is one where she feels most at home.

Apart from her writing, Victoria is an avid reader of anything that catches her interest, but especially Regency romance. She also teaches introductory creative writing. Her love of horses gets her away from her computer to volunteer at Spruce Meadows, a world class equestrian centre near Calgary, Alberta, where she currently lives.

Couldn't put it down. Wonderful historical novel with all the expected twists and villians.

Canadian Brides. Book Eleven. BooksWeLove Inc dedicated this series to the immigrants male and female, who left their homes and families, crossed oceans and endured unimaginable hardships to settle in the Canadian wilderness and build new lives in a rough and untamed county.

When I begin a novel by Ms Davison I know I will enjoy it. Envy the Wind fulfilled all my expectations of a story rich in historical details with major and minor characters that sprang to life and remained with me after I read the last page.

According to the terms of the will made by Grace MacKinnon’s father she becomes a ward of his business partner Angus, who always ‘impressed on her the expense of her upkeep was his personal burden.’ Married to his son, Frederick, when she was seventeen, after Frederick’s death she became Angus’s unpaid housekeeper. Grace is shocked when she finds a letter from her late father’s solicitor among her deceased husband, possessions. At the age of 23 she should have been granted control of her inheritance, but Angus had never discussed it with her.

Grace escapes the unscrupulous Angus and sails to Nova Scotia, but her father-in-law does not release his hold on her easily. The ship encounters a near disaster in Halifax Harbour when Grace meets Andrew Jardine. He is on his way back to Prince Edward Island and invites Grace to travel with him on a friend’s steamer to the island where Angus’s agent will never find her.

I enjoyed Ms Davison’s word picture of Grace’s first impression of New Brunswick. ‘Behind the harbour was a tree-lined street unlike any Grace had seen before. The majority of the houses had boarded facades as opposed to brick or stone, most with bay windows, covered verandas and porches, all freshly painted in pastel colours like a child’s toy village just out of the box.’ And, on the way to Charlottesville the steamer glided ‘through the strait along a shore of rose and golden sand that sparkled in the sunshine. Coves and small bays wound in and out, beyond which lay a patchwork of lush rolling fields, tiny gabled farmhouses and seaside villages scattered along the shore.

While reading historical fiction, I always appreciate it when the author slips facts into the story as skilfully as Ms Davison. For example: ‘Here, is your first history lesson,’ Mr Jardine says to Grace. ‘In the mid 1700’s Charles Lawrence and John Gosham clashed with Louis Loutre who led the M’ikmaq tribe and the Acadia against the British.”

Jealousy, an attempt to incriminate Grace in illegal activity, her friendship with L.M. Montgomery author of Anne of Green Gables, sabotage and romance are woven into Envy the Wind, which enthralled me from beginning to end.

I look forward to reading Ms Davison’s next novel.

Other titles by Anita Davison

Other titles by Victoria Chatham