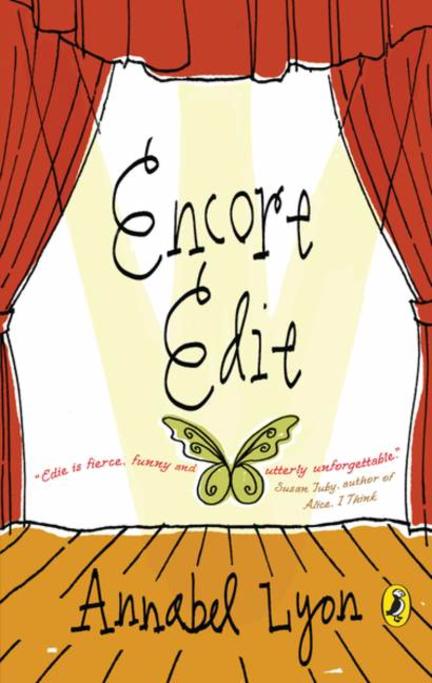 Life isn’t easy for thirteen-year-old Edie Snow. She’s the youngest kid in her new high school, she has a serious shortage of cool clothes, and her own family doesn’t even understand her. Add to that a sister who’s acting crazy, a boy friend who wants to be a boyfriend, and a mortifying nickname, and it’s about as much as one girl can bear. To make matters worse, her mom is making her to walk her cousin Merry, who has Down syndrome, home from school every day. Edie figures she can make new friends and get out of walking Merry by joining the school play—but putting on an ambitious musical production of Shakespeare’s King Lear only ends up alienating her further from her schoolmates. With the musical on the brink of disaster, Edie realizes that if she doesn’t find some help—fast—it’ll be curtains for her play … and her social life.

Annabel Lyon is the author of two books of adult fiction, Oxygen and The Best Thing For You. All-Season Edie is her first work for children. She lives in New Westminster, British Columbia, with her husband and two children.

Praise for All-Season Edie: “Astonishingly fresh … has the classic flavour of Ramona and Beezus, as if they had hit middle school and met the new millennium.” - The Bulletin of the Center for Children’s Books

It’s hard not to love Edie Snow, the eccentric 13-year-old heroine of Annabel Lyon’s sequel to All-Season Edie. She can be bossy and a bit oblivious to other people but she is funny, energetic and passionate. Advice from her beautiful and popular older sister doesn’t stop Edie from acquiring an unfortunate nickname, alienating her best friend and feeling totally lost at her new high school. Things turn around when she accidentally volunteers to write the school musical, a reworking of King Lear (Edie’s a Shakespeare fan). Edie gets guidance from a cool older girl but she is mostly on her own and she learns a lot about her flair for leadership and how to embrace being a bit weird.

While Encore Edie is sensitive to the types of ‘issues’ other middle grade novels often focus on, it doesn’t dwell on any in an obvious way. With a light touch, Lyon explores Edie’s relationship with her cousin Merry, who has Down syndrome. Merry is both normal and different, just like all the other characters in the novel. Lyon’s writing is playful and entertaining and the plot clips along at a fast pace. The high school musical setting is fun but we don’t get a blow-by-blow of the production which keeps it from getting stale or predictable. Smart girls everywhere will relate to Edie’s playful voice and her despair at her many social blunders. Things aren’t completely tidied up at the end but there is a satisfying resolution.

Edie Snow is 13 and the youngest kid in her high school. Struggling to fit in, she joins the school play to avoid walking home from school with her cousin Merry who has Down syndrome. But when the school musical alienates Edie from her schoolmates even further, she’s got to find help fast.

Other titles by Annabel Lyon

The Best Thing For You