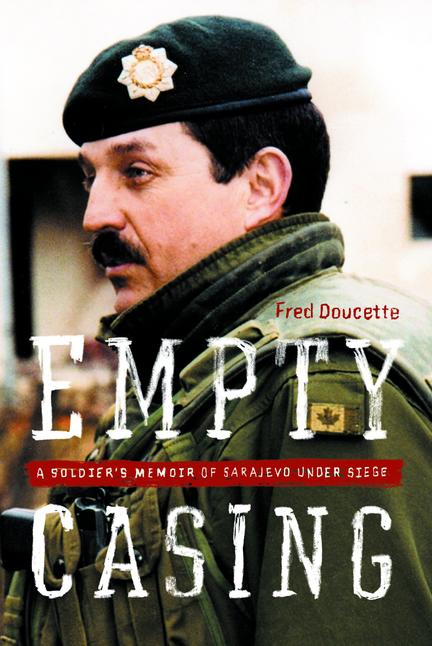 When Canadian soldier Fred Doucette was deployed to Bosnia-Herzegovina as a UN peacekeeper in 1995, he had a premonition that this tour of duty would be different. He had been posted to Cyprus in the 1970s and 1980s, but the horrors of the Bosnian conflict of the 1990s were beyond imagining.

Doucette takes us to the heart of the conflict as the Bosnian Serb forces launch a massive, concerted assault. Sarajevo, the largely Muslim Bosnian capital, is devastated. Thousands of Sarajevans perish. UN forces, tasked with imposing and maintaining peace between the warring forces, realize this is an impossible task.

Upon his return to Canada, Doucette begins his own war with posttraumatic stress disorder. Nightmares and flashbacks plague his days and nights. Traumatized and disoriented, he must learn to face himself, his family and his army once again.

With raw emotion, Empty Casing tells the story of the making and unmaking of a soldier, and the growth of a man.

Frederick Joseph Doucette joined the Canadian Army Militia in 1968, and was posted to the 2nd Battalion of the Royal Canadian Regiment as an Infantryman in 1970. After already more than twenty-five years of loyal service to the Canadian Army, Doucette was posted to Sarajevo, Bosnia in 1995, where he served as a Military Observer for the United Nations. In the summer of 2000, Doucette was diagnosed with Post-Traumatic Stress Disorder caused by multiple operations experiences dating as far back as his first United Nations tour in 1973. Since being released from the military in 2002, he has been working with the Department of National Defense/Veterans Affairs Operational Stress Injury Social Support Program as the Peer Support Coordinator, providing peer support to Armed Forces personnel and veterans suffering from PTSD. He lives in Fredericton, New Brunswick, where he enjoys family life, woodworking, writing and traveling.

Lieutenant-General Romeo Daillaire served thirty-five years with the Canadian Armed Forces and now sits in the Canadian Senate. His Governor General's Literary Award-winning book, Shake Hands With the Devil, exposed the failures of the international community to stop the Rwandan genocide. His second book They Fight Like Soldiers, They Die Like Children, exposed the increasing use of child soldiers, as he saw first hand in Rwanda. Dallaire has received numerous honours and awards, including Officer of the Order of Canada in 2002. His activities continue to include work on genocide prevention, the non-proliferation of nuclear weapons and the Child Soldier Initiative, which seeks to develop a conceptual base for the elimination of the use of child soldiers.

"Empty Casing takes a long, hard look down a road that Doucette and many other soldiers have traveled. The author is a gifted storyteller who vividly imparts his experience and insight to the reader. This deeply personal book also speaks for a whole generation of soldiers, for a tortured city, for the hopes and pain they carry."

"Empty Casing is an indictment of the way the Canadian military handled people with post-traumatic stress disorder like Doucette. It is written in the blunt no-holds-barred language soldiers use among themselves when discussing the faults of their bumbling leaders. It is not a book for the easily shocked. There was nothing pretty about Bosnia."

"In Empty Casing, Fred Doucette describes his life before, during, and after his time as a United Nations Military Observer in Sarajevo during Slobodan Milosevic's campaign to clear the city of its Bosnian residents...Doucette watched helplessly as men, women, and children died on a daily basis...This is very much a personal memoir...[and] Doucette also does not pretend to have an unbiased opinion: his language is violent and is intended to shock the reader with his brusqueness...the book leaves us...with the hope that the author will eventually let go of his anger and be at peace with himself and those around him."

"The story Doucette tells is, in many ways, a quite ordinary soldier's tale, filled with the small struggles and triumphs of life in the military...And yet, its very ordinariness is partly what makes it compelling...Like the straight-talking soldier he is, Doucette neither holds back nor exhibits self-pity. He describes his feelings and despair, the sudden and uncontrollable rages, the long periods when he didn't care about anything at all. In doing so with plain, understated simplicity, Doucette helps the reader gain a little insight of what a mind injured by war is like...As a guide to the tortured mind of a soldier injured by the stress of modern war...it is compelling and revealing."

"A soldier's story told from the inside, passionate, riveting and extremely necessary."

"Empty Casing is a difficult story, one not easily read, just as Fred Doucette's experiences were not easily lived. Still, this is a first-hand report of one soldier's descent into hell, told with humility and courage. Today, when wars still rage around the world, many more men and women will return irretrievably wounded...We need to understand."

Other titles by Fred Doucette

Other titles by Romeo Dallaire

Collapse of a Country

A Diplomat's Memoir of South Sudan

My Ongoing Battle with PTSD

How We Stopped Loving the Bomb

The Global Quest to Eradicate the Use of Child Soldiers

Religion in the Ranks

Belief and Religious Experience in the Canadian Forces

Tales of Courage and Tenacity in Canadian Military History

Leading a Spiritual Life in a Secular World

Shake Hands with the Devil

The Failure of Humanity in Rwanda