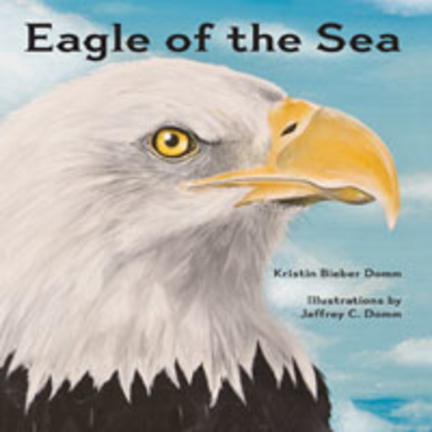 Powerful and fast, bald eagles are some of the most majestic birds in the world. They can spot their prey from two kilometres away, build a larger nest than any other North American bird, and dive at speeds up to 160 kilometres an hour! And in eastern Canada, bald eagles are thriving.
Learn about these amazing birds—their habitat, hunting skills, nesting habits, and more—in Eagle of the Sea. With vibrant, detailed illustrations and accessible text, Eagle of the Sea is both educational and awe-inspiring.

Kristin Bieber Domm has been a teacher for twenty-eight years. She is the author of four Nimbus titles for children, including Atlantic Puffin. Kristin teaches writing and graduate education courses part-time at Mount Saint Vincent University. She is a participating writer in the Writers in the Schools program and plays bassoon in the Wyndrock Quintet. She lives in Cow Bay, Nova Scotia.

Jeffrey C. Domm is an award-winning illustrator with over thirty wildlife related books to his credit, including the children's books Atlantic Puffin and The Hatchling's Journey. He has been teaching illustration and drawing at NSCAD University for over sixteen years and his body of work includes illustrations for Parks Canada, Environment Canada and Canadian Wildlife Service. He lives in Cow Bay, Nova Scotia.

Eagle of the Sea

This is the fourth non-fiction picture book from author Kristin Bieber Domm and illustrator Jeffrey C. Domm about interesting animals living in eastern Canada. Previous titles look at puffins, turtles and piping plovers. Bald eagles are found only in North America and in many places their population is dwindling. In this story, the focus is on a pair of eagles living in the Cole Harbour Salt Marsh on the eastern shore of Nova Scotia. Here, the eagles are protected and thriving. The author takes us through the bird’s life cycle, told in the first person by the female eagle. The prose is simple, spare and descriptive, for example: “Sometimes eagles like me are called ‘lions of the sky’ because we are skillful hunters.” There is lots of information here as the eagle pair moves through the seasons, mating in the spring, taking care of the two eaglets through the summer and fall and surviving through the winter to the following spring.

Richly detailed acrylic paintings convey the majesty of these birds and add to the information in the text. The illustrator uses a variety of perspectives, from close-ups to action shots. It is a great addition to this series, good for reading aloud and simple enough for young students to read alone. Domm includes a page with further information about bald eagles for adults.

Eagle of the Sea

Bald eages live in North America — and nowhere else on earth — and they are thriving in eastern Canada. Written in the first person, this eagle tells us about her unique abilities, her habitat, her hunting prowess, her chicks and much more. Colourful illustrations accompany this informative text.

Other titles by Kristin Bieber Domm

Ahmed and the Nest of Sand

Other titles by Jeffrey Domm

Tangled in the Bay

Ahmed and the Nest of Sand