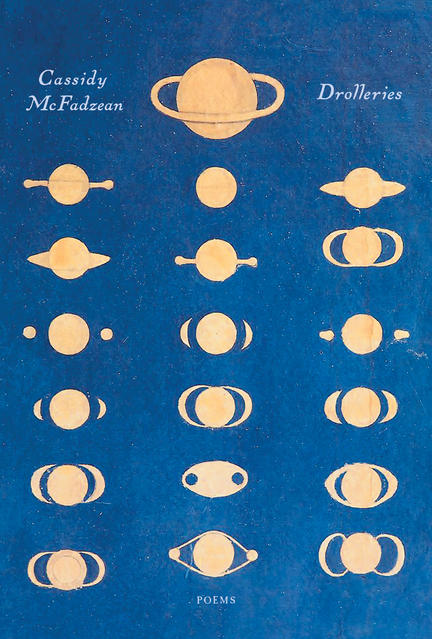 Invoking human-animal hybrids in various stages of metamorphosis, Drolleries veers between the beasts of the forest and the opulence of the art gallery. Personal and historical struggles are held against the backdrop of the grotesque and fantastic: A marriage unravels in Goya's Black Room. The diagnosis of a blood-clotting mutation is read through the tarot. The violence of the patriarchy is filtered through the subconscious. In sonically rich lyric poems that traverse the vulnerability of confession and the dramatic possibilities of persona, Drolleries invokes its monsters as a means of working through internal turmoil, existential doubt, and heartbreak. This collection investigates how the lure of romantic relationships, the enchantments of art, and the seductions of power can be both destructive and transformative - and ultimately become a pathway to self-realization.

CASSIDY McFADZEAN was born in Regina, Saskatchewan, and earned an MFA from the Iowa Writers' Workshop. In 2015, she published Hacker Packer, which won two Saskatchewan Book Awards and was a finalist for the Gerald Lampert Memorial Award. Her poems have appeared in magazines across Canada and the U.S., including BOAAT, Prelude, The Fiddlehead, PRISM international, and Arc, and have been finalists for the CBC Literary Awards, The Walrus Poetry Prize, and the Canadian Authors Association's Emerging Writer Award. Her work has been anthologized in The Best Canadian Poetry 2016, The New Wascana Anthology, and In Fine Form 2. She lives in Toronto.

all most early humans did was fashion
axe heads from hunks of chalcedony,

jasper, and flint, cryptocrystalline quarried
and hauled to the carving site. We worked

obsessively, breaking blocks of basalt
into hammerstones in teardrop shapes,

Was it ritual, pragmatic, a nervous tic?
One of us strayed from the carving site.

Another pulled a clamshell in two,
and found an iridescent whorl not unlike

the wash of green when we gazed
at the night sky. I wanted to hold him

like a brother, this artist, when I saw
him sleeping in the loam, but flattened

to the bog he appeared so lonely.
Were we all this alone? It was the sky

that called us forward, to depart
our planet’s terrarium to celestial spheres.

The stars that lent us these atoms
would take our flicker of energy within.

We’d be calmed in our coming home,
like holding a slab of rock perfectly fitted

to our hands’ flesh and striking stone.

“Cassidy McFadzean’s Drolleries evokes magic and vivid detail . . . Rarely does a poetry collection do such a cogent job of combining world-building and specifics. In Drolleries, McFadzean comes into her own as a metaphor maker. . . . A must-have for its technical skill and lyrical brevity." --Quill & Quire
“There’s a lushness in Drolleries, an opulence; even the shortest lyrical pieces are dense with detail. Sometimes the collection’s tone turns nearly documentary, illuminating minutiae with an art historian’s fervor. If McFadzean’s catalogues and descriptions occasionally veer toward the extravagant, it’s not due to a lack of self-control (the poems are, in fact, admirably precise and restrained). Rather, McFadzean seems to want to demonstrate the difficulty of packing the too-much-ness of it all—the feelings, the grief, the regret, the terrible beauty—into easily digestible pieces. The poems strain at their seams, larger than life, their beasts threatening escape. . . . a collection to read many times over.” —Canadian Notes and Queries

Other titles by Cassidy McFadzean