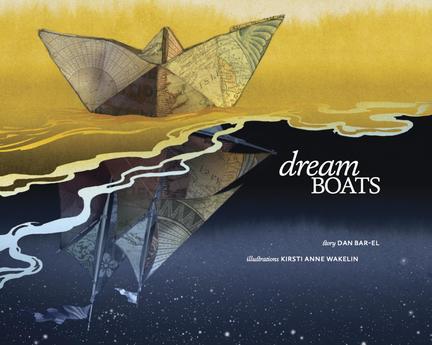 Where do children go when they close their eyes to sleep?

They step onto their dreamboats and sail toward adventure.

From Maiqui in the Andes floating through the constellations, to Aljuu paddling along the shores of Haida Gwaii with Eagle, Orca and Black Bear, to Ivan sailing into St. Petersburg, then sneaking between the bony legs of Baba Yaga, stories and memories lead them on.

Dream Boats takes readers into the dreams of children around the world, dreams that are filled with family and legends, culture and love. Written in lyrical prose by Dan Bar-el with gorgeous art by Kirsti Anne Wakelin, this is a book to be treasured by generations of dreamers.

Dan Bar-el believes that the highest compliment a preschool child can pay is to call one silly. He carries the label with honor. "Preschool children have no patience for 'jokes,'" he says. "Ask one to tell you a knock-knock joke and, painfully, you'll see my point. But nothing gets a giggle like the absurd. Nothing is funnier than turning the rules on their heads." And that is exactly what Dan has done in his new book, in which each of twenty-six children is named for a child he has taught. The author of Things are Looking Up, Jack and Things are Looking Grimm, fill, Dan lives, writes and teac

Kirsti Anne Wakelin was born in Maple Ridge, British Columbia. She studied Graphic Design and Illustration at Capilano College and Painting and Decoration for Motion Picture Set painting at BCIT. Before becoming a freelance designer, illustrator and fine artist, she worked in the Internet industry as an interface designer, print designer and illustrator. Kirsti now lives in Vancouver with a view of the ocean.

Reviews for Pussycat, Pussycat, Where Have You Been? also by Dan Bar-el

""Unbeknownst to many Mother Goose readers, a number of classic rhymes continue way past their well-known opening stanzas (“Old Mother Hubbard” is a particularly fine example), but here, Bar-el creates his own extension of the initial London rendezvous in “Pussycat, Pussycat.” Traveling onward to Paris and Australia and over the midnight seas, the pussycat adventures through imaginative Chagall-style acrylic paintings. “Pussycat, Pussycat, will you stay home? / I always get restless, I always will roam.” Take that, lazy cats."" - New York Times

""A tour de force that is sure to become a classic."" - Quill and Quire, Starred Review

""Readers familiar with the original classic Mother Goose rhyme are in for a real treat with a wonderful revamping."" - CM Magazine

""Dan Bar-el has taken Pussycat from the traditional rhyme far beyond London and the Queen’s chair in a delightful romp around the world. The rich language is embellished with the beautiful and equally rich illustrations by Rae Mate."" - Resource Links Review, Excellent Rating
""Dan Bar-el’s creative extension of the Mother Goose rhyme is a lyrical journey perfectly accompanied by Rae Maté’s dreamy paintings.""  - Canadian Children's Book News

Reviews for Looking for Loons

""Luminous watercolors are an excellent match for the natural beauty of the tale's setting . . . a very attractive and well-designed book"" - Quill & Quire

""Looking for Loons perfectly distills the magic of an early autumn cottage porch, watching the world wake up. Silence disturbed only by lake animals, coolness in the air before the day’s heat starts up, it’s a wonderful hold-your-breath instant that seems to stretch while dew drips off the branches, and inside, bacon sizzles. Local artist Kirsti Anne Wakelin’s exquisite watercolours span every shade of fall’s palette, with delicate tableaux of stillness and possibility."" - Georgia Straight

CTTC Recommended Read 2014
Deakin Review of Children's Litearture: This is a gorgeously illustrated book which offers readers the opportunity to “float” in a dream boat, travelling deep into the richly-embroidered dreams of children from different lands and varying traditions.
Starred review, Quill & Quire, April issue
“I don’t have naps. I have adventures. I don’t sleep in a bed. I ride in a Dream Boat.” So begins Vancouver author Dan Bar-el’s delicious journey into the reveries of children all over the world.
Marco is whisked away in a boat made of reeds to the Andes, where the stars guide him to his grandparents’ village for dancing and feasting. Kaia’s cedar canoe flies her to Haida Gwaii for a potlatch, while Ivan’s mighty frigate sails past the Bear Spirits to the realm of Baba Yaga and the Firebird. From Babatunde gliding along the waters of the Niger to Shenaz in her fishing boat being sprinkled with spray from Giant Ganesh’s trunk, these children all have their own vessels that take them away to lands of myth and memory.
This is a gorgeous bedtime book. Bar-el’s poetic prose sweeps the reader along on the swish of the water and the wind that vaults the boats aloft. The vignettes about each child are interspersed with pages in which children representing diverse cultures meet and play together in the air.
Kirsti Anne Wakelin’s rich, multi-layered illustrations convey both the spirit of adventure and the children’s sleepiness. Whisking the reader between cultures and across boundaries of night and day, earth and air, reality and fantasy, the pictures embody the interweaving of the children’s stories. Words and pictures float together and, like the Dream Boats, “dock gently.” – Joanne Findon
Lemon Squash Bookclub -
“Where do children go when they close their eyes to sleep?
They step onto their dreamboats and sail toward adventure.
From Maiqui in the Andes floating through the constellations, to Aljuu paddling along the shores of Haida Gwaii with Eagle, Orca and Black Bear, to Ivan sailing into St. Petersburg, then sneaking between the bony legs of Baba Yaga, stories and memories lead them on.
Dream Boats takes readers into the dreams of children around the world, dreams that are filled with family and legends, culture and love. Written in lyrical prose by Dan Bar-el with gorgeous art by Kirsti Anne Wakelin, this is a book to be treasured by generations of dreamers.

School Library Journal: This is a truly remarkable book! Captivating, it comprises a feast of double-page illustrations of outstanding quality, and prose of powerfully poetic strength. The dream boats and those they carry explore different seas, different worlds and different populatins. My only reservation centres on the publisher's suggestion that it is a book suitable for the 4 to 8 range. Some very young children will have happy encounters with this unique book, but, beyond doubt, many readers well beyond the age of 8 and well into mature adult years are likely to be entranced by what is presented here in both skilled language and intriguing illustrations.

Other titles by Dan Bar-el

Pussycat, Pussycat, Where Have You Been?

Dog Night at the Story Zoo

It's Great Being a Dad

Other titles by Kirsti Anne Wakelin