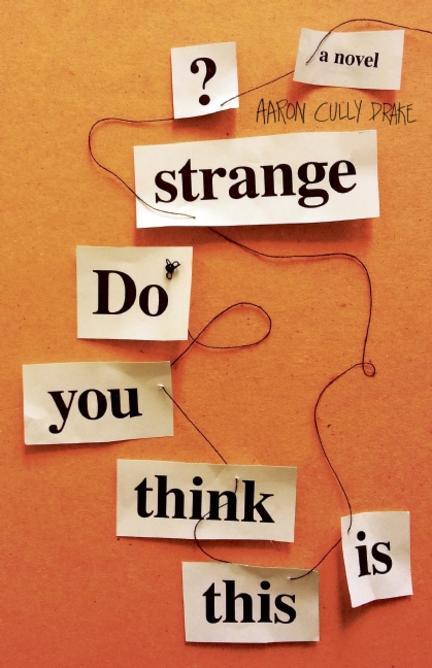 When he’s seven years old, Freddy's mother walks him to the train station, sits him on a bench, kisses his forehead, and disappears from his life. In a few short days, everything changes. His father moves him across town, enrols him in a different school, and takes him away from little Saskia, the only friend he’s ever had.

Ten years later, Freddy is struggling to get through his last year of high school. He painstakingly avoids interactions with other students, who don’t understand his hyper-literal perspective. But then Saskia appears, and she’s different from the laughing little girl he remembers. She no longer smiles, and she doesn’t speak.

As they reconnect, Freddy begins to remember what really happened ten years ago. And everything he thought he knew begins to unravel. Both humorous and heartbreaking, Do You Think This Is Strange? is a coming-of-age tale you won’t soon forget.

Aaron Cully Drake has written for newspapers and magazines and is a former reporter and editor. He lives in Vancouver, British Columbia, with his wife, son, and autistic daughter, all of whom keep advising him to shut up. Do You Think This Is Strange? is his first novel.

"This story is not just about a boy with autism but rather about how people view and respond to him … This must-read for students and educators rewards with insights into autism." —BC Books for BC Schools

"Outstanding . . . The relationship between Saskia and Freddy is everything teen romance readers yearn for, but complex enough for adult readers. With an enthralling character voice, an atypical narrative structure, and an unexpected mystery, Drake's first outing sets a high bar for his next." —Publishers Weekly

"Quite simply, I loved this book. Do You Think This Is Strange? is being compared to The Curious Incident of the Dog in the Night-Time and The Rosie Project. I haven’t run into too many people who haven’t liked The Rosie Project, and I am here to tell you that I loved this one more. It felt so much more genuine and meaningful, while still possessing the humour and feel-good qualities that made people fall in love with The Rosie Project." —Consumed by Ink blog

"Consider this the antidote to The Curious Incident of the Dog in the Night-Time. Whereas Mark Haddon’s 2003 novel, the most popular literary representation of autism to date, presented a barely functional savant, the 17-year-old at the heart of Aaron Cully Drake’s debut is someone that the majority of autistic people might recognize...Freddy is an authentically exasperating teenager. You’ll want to read this coming-of-age story anyway, not least to watch Freddy solve the common mystery of why his family is as it is." —The Globe and Mail

Do You Think This Is Strange? is included in 49th Shelf's "Most Anticipated: 2015 Fiction Spring Preview."

Do You Think This Is Strange? is featured on All Lit Up's blog for First Fiction Fridays.

"A nuanced and sensitive narrative of conflict, comedy, and trauma … Drake's writing is delightful, and the architecture of the book is subtle and effective … Do You Think This Is Strange? is not simply about a boy with autism, but more importantly about the way those who encounter him (including the reader) choose to respond to him." —Quill & Quire

"Aaron Cully Drake might be our Canadian equivalent of Lisa Genova. His debut novel Do You Think This Is Strange? is a riveting novel narrated by a highly functional autistic seventeen-year old. The author, whose daughter has autism, managed to create an accessible and lovable character, opening the reader’s mind to a condition very little understood amongst the public ... It questions the concept of normality and relationship; it raises awareness about people with autism; it does, hopefully, trigger interest and understanding towards people who behave differently than the majority. To put it simply, Do You Think This Is Strange? is a very human book that everyone should read." —Angelique, Maple Books

In an interview with Naomi at Consumed by Ink blog, Aaron Cully Drake fills us in on his inspiration and writing process for Do You Think This Is Strange?

In her Year in Review, Naomi at Consumed by Ink chose Freddy as her "character of the year."

...or "Books by Canadian Authors Who Are All So Horribly Good at What They Do That They Are Now Discouraging People from Picking Up the Pen, Just Like …