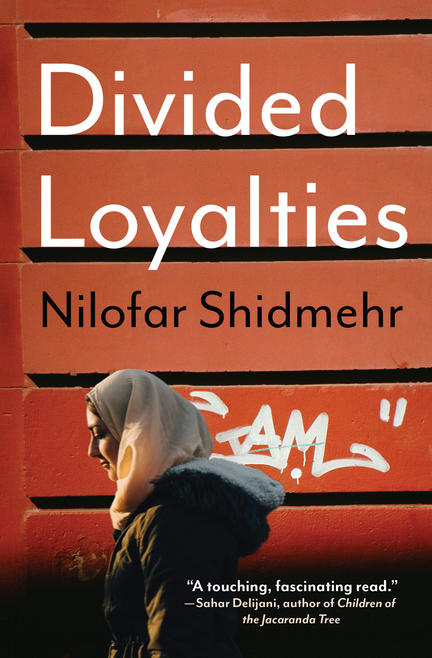 Acclaimed poet Nilofar Shidmehr’s debut story collection is an unflinching look at the lives of women in post-revolutionary Iran and the contemporary diaspora in Canada.

The stories begin in 1978, the year before the Iranian Revolution. In a neighbourhood in Tehran, a group of affluent girls play a Cinderella game with unexpected consequences. In the mid 1980s, women help their husbands and brothers survive war and political upheaval. In the early 1990s in Vancouver, Canada, a single-mother refugee is harassed by the men she meets on a telephone dating platform. And in 2003, a Canadian woman working for an international aid organization is dispatched to her hometown of Bam to assist in the wake of a devastating earthquake.

At once powerful and profound, Divided Loyalties depicts the rich lives of Iranian women and girls in post-revolutionary Iran and the contemporary diaspora in Canada; the enduring complexity of the expectations forced upon them; and the resilience of a community experiencing the turmoil of war, revolution, and migration.

NILOFAR SHIDMEHR is a poet, essayist, and scholar. She is the author of Between Lives and Shirin and Salt Man, a finalist for a B.C. Book Prize. Her short stories have been published in Room, The New Quarterly, and Ava-ye-Tabiid (The Voice of Exile). She has published several books in her mother tongue, including a Farsi translation (with Ali Azarang) of Toni Morrison’s novel The Bluest Eye, and a wide range of essays on women’s rights, migration and diaspora, and social and political issues in Iran. As a member of the Iranian women’s movement, she presented lectures at the Iranian Women Studies Foundation Conference and at the Iranian Women Activists’ Organizations annual seminars in Germany. She holds a B.A. (Double Honours) in Philosophy and Creative Writing, an M.F.A. in Creative Writing, and a Ph.D. in Cross Faculty Inquiry in Education. Dr. Shidmehr is one of the pioneers of poetic inquiry as a methodology of research and a specialist in literature and cinema of modern Iran. She teaches Liberal Arts at Simon Fraser University in Vancouver, Canada, where she lives with her husband.

I arrive in Tehran two days after my brother called to inform me about my father’s death. “A car hit Papa,” Milaad said, his voice cracking like phone static. “It happened close to his home. He died on the spot. The driver fled the scene — we couldn’t find him. There is also something else, which I’ll tell you when I’ll see you.”

Thankfully, Milaad accompanies Maman to meet me at the airport. Maman and I had a fight on the phone six months ago and we haven’t talked since. That was the night I came back from Paris, the last place I saw my father alive. Our squabble doesn’t matter now. I am here to be with my mother during the forty-day mourning period. I might even stay longer — for six months, a year, or, who knows, the rest of my life — if Maman and I can get along now that the source of our separation is gone.

Nor does it matter that my mother wrongly accused me of siding with my father. In truth, Papa and I had a row at the end of our trip and he accused me of the exactly the same thing: of supporting her. This is what our parents did to me and Milaad all our lives. Each wanted us in their camp when they fought with each other. And once they made peace, they would divide their children between them. Milaad was hers and I was his.

My situation was much worse than my brother’s during the times when our parents quarreled. As a girl, I was supposed to side with my mother. This wouldn’t have been difficult, if her true reason for being angry was that my father was a miser. We lived very close to poverty because the only money that came into the home was from our mother’s meager salary. Papa used all of his money to buy property. However, the real reason behind my mother’s anger was to control my father and keep him, like Milaad, under her thumb. I believed my father should have his independence as much as I wanted to have mine. I wanted to have freedom of association — to like, love, and assemble with whomever I chose, including my aunt Raazi, Papa’s younger sister.

Entering the arrivals area and dragging my suitcase behind me, I look around for my mother and see her, along with Milaad, walking toward me. In her black winter coat, slacks, and wimple hijab, she looks slim and miserable. I speed up and we meet halfway. She throws herself into my embrace and wails. “You see, Maana, your mother is a widow now.”

People standing nearby look at us with compassion. “Sorry for your loss,” they whisper as they pass. The other passengers laugh with joy as they reunite with their loved ones. Their families, dressed mostly in bright colors, shower them with flowers and kisses. I pass Maman a clean napkin I’ve saved for my own crying and hold her until her sobbing subsides.

Other titles by Nilofar Shidmehr

Persian-Canadian Writers You've Got to Read

So, where were all the Persian Canadian writers? It turns out, here all along, but not as represented as one might hope; as they deserve to be.