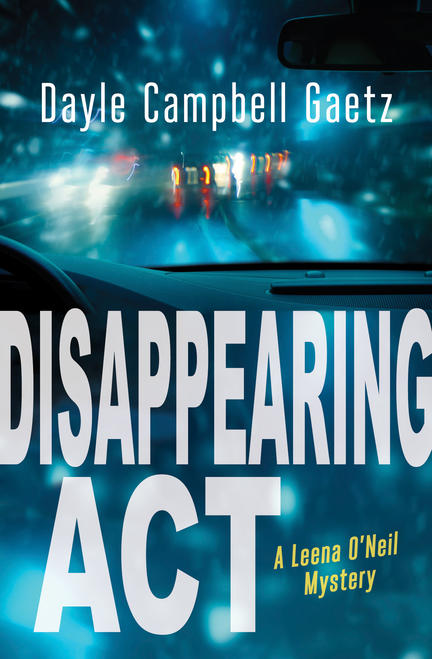 At age twenty, Leena O'Neil walked away from her old life. Anything to avoid becoming a lawyer like her mother and older sister, Georgia. Three years later, Georgia contacts her, convinced that her husband is trying to kill her rather than divorce her. Reluctantly, Leena agrees to help. But the stakes go up when Georgia's husband, Mark, is murdered. Now she wonders if the person who killed Mark is out to get Georgia as well. Armed with several online courses in criminology and investigative strategies, Leena considers herself "almost a private investigator" and she sets out to uncover the truth. Disappearing Act is the first in a series of mysteries featuring rookie private investigator Leena O'Neil.

Dayle Campbell Gaetz grew up in Victoria and attended the University of Victoria. She has always loved books, both reading and writing them. Her writing career began on Salt Spring Island where she wrote her first 16 novels. For several years she wrote a column for the local weekly newspaper and published the occasional article in children's magazines. Dayle now lives in Campbell River, British Columbia where, in addition to her own writing, she teaches a correspondence course on Writing for Children and Teenagers. She has published 21 books for readers from ages seven to 17. Never knowing what idea will strike next, Dayle writes books that range from science fiction to history and from biography to mystery. Thanks to a strong interest in British Columbian history, she wrote two historical novels that take place in B.C.'s early days. On the heels of those books came Mystery from History and Barkerville Gold, both with historical connections. She had meant to end there, but the three young characters refused quit at Barkerville. They have since travelled on to Alberta, (Alberta Alibi) and recently into Saskatchewan (Something Suspicious in Saskatchewan). Manitoba is calling to them next and it seems wherever they go the children trip over mystery and tumble into danger. Dayle's other books from Orca include Sea Dog (Orca Echoes), the story of two lonely people, a seven year old boy and an old man who are brought together by their love of one dog. At the other end of childhood is No Problem (Orca Soundings), where a 17 year old boy stands on the brink of drug abuse. In between is an Orca Currents, Spoiled Rotten, about an outdoors-loving 14 year old girl who needs to deal with a new stepsister who really is spoiled rotten. For more information about Dayle, visit http://web.mac.com/gdgaetz.

Holey Tales: 7 Literary Sleuths Are on the Case for Mystery Month

In which writers use a mysterious hole as a starting point for a mystery. The results are wildly diverse, a lot of fun, and make for some excellent …