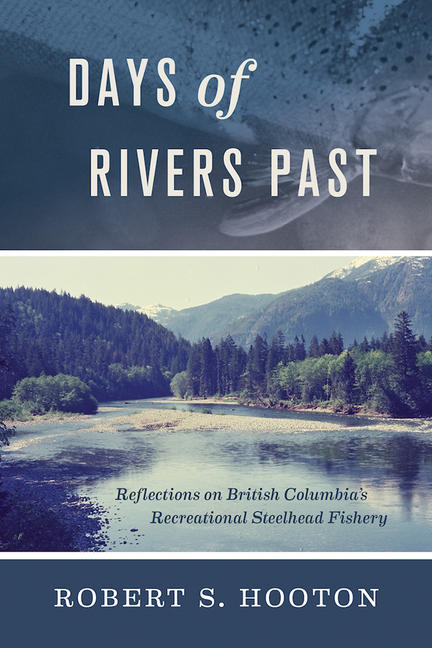 Personal and professional thoughts on some of British Columbia’s iconic steelhead rivers, along with considerations on the possible futures these streams face in an era of declining habitat, recreational pressure and a changing climate.

Days of Rivers Past takes the reader on a fascinating journey into the heart of the steelhead fishery. From the banks of the renowned streams Sustut, Babine, Skeena, Ksi Hlginx (formerly Ishkheenickh), Bulkley, Squamish, Tsitika, Salmon, Gold, Stamp, Englishman and Nanaimo, Robert Hooton guides us through the deep history of steelhead, from the 20th and into the 21st century, from times when fish stocks were historically strong to our current era when the species is suffering due to factors affecting human and non-human biosystems alike.

Robert Hooton’s book is not prescriptive, nor does it blame individuals or even government agencies for the circumstances we find ourselves in. Rather, it attempts to leave a record of where the steelhead fishery has been, and points to the occasional door that still remains open to those in positions of power who are willing to facilitate positive change in order to preserve what remains of British Columbia’s remarkable steelhead sport fishing heritage.

Robert S. Hooton was born and raised in the Vancouver area and spent all his school years there, including attending Simon Fraser University as a charter student. Entry into a career in fisheries came a year after graduation, and his career path took him from the East Kootenays to Victoria, then Nanaimo and on to Smithers before returning to Nanaimo. Steelhead and steelhead management dominated his professional and leisure pursuits. After 37 years of public service, Bob retired and eventually authored his first book, Skeena Steelhead: Unknown Past, Uncertain Future (Frank Amato Publications, 2012). Bob and his wife, Lori, live in Nanaimo, British Columbia.