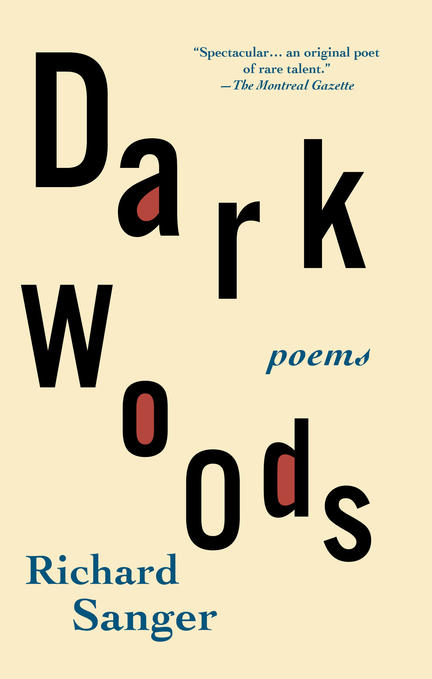 Snow, canoes, frozen ponds, lonely conifers . . . Dark Woods takes the motifs and landscape of a Canadian childhood and examines their place in a world of smartphones and overflowing inboxes. The result, Sanger’s first book in 16 years, is a striking new collection full of mysteries and reassessments, wordplay, slang, and sonnets, meditations on parenthood and the “cracks in the granite”: those urges that won’t go away, and the people who have.

Richard Sanger's poems have appeared in numerous publications in Canada, Britain and the U.S, including Descant, Fiddlehead, The London Review of Books, Queen's Quarterly, SouthWest Review, and The Times Literary Supplement; his first collection, Shadow Cabinet, appeared in 1996. His plays, Not Spain and Two Words for Snow among them, have been nominated for the Governor General's Award and the Chalmer's Prize.Torontonians were eager to share their favourite haunts and discoveries.

“The rueful, lucid, deliberately casual poems in “Dark Woods” can surprise you with their tenderness, but also with their prickly intelligence.” —The New York Times

“In the poems' accentual, lightly metered stanzas we are made conscious of time passing, the body aging, and those quiet moments outside time...understated and moving.” —The Malahat Review

“Splendidly-shaped and imagistically adroit. These are outstanding poems.”—The Globe and Mail

“[Sanger] naturalizes the traditional influences in his poems so thoroughly they are almost covert. This gives his poems an inner voice running under the colloquial surface and suggests an attitude toward consciousness in a lyric poem as interesting as the dislocated subject…” —Books-in-Canada

“Very accomplished… [Sanger] writes in a voice that is all his own, and its groundtone is a cleverly, progressively sophisticated one which is never merely adroit.” —Journal of Canadian Poetry

Other titles by Richard Sanger