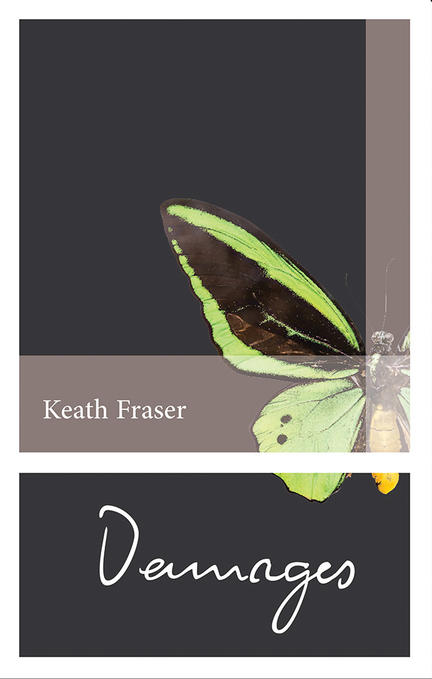 “If you really want to journey into the heart of darkness, you'd be advised to travel with Vancouver writer Keath Fraser, a man of extraordinary talents.” —Bronwyn Drainie

An icon of Canadian short fiction, Keath Fraser has exerted a wide and trenchant influence since the publication of his first collection Taking Cover in 1982. Damages: Selected Stories 1982–2012 gathers the finest of his work across decades. Combining the craftsmanship of the form’s greatest masters with the idiosyncratic voices and music of our contemporary moment, the stories selected here travel from the richly peopled worlds of Fraser’s Vancouver to the Gulf of Thailand, a Phnom Penh bone-house embassy, and the Rajasthan desert, and demonstrate remarkable diversity of character and effortless storytelling across a range of modes. Featuring an introduction by John Metcalf, and including the novella “Foreign Affairs,” called by the Oxford Companion of Canadian Literature “one of the masterpieces of Canadian short fiction,” Damages showcases Keath Fraser as one of the best and most enduring story writers of the last fifty years.

Keath Fraser's stories and novellas have been reprinted in numerous Canadian and international anthologies. His essays on writing are reprinted in the anthologyHow Stories Mean(PQL, 1993). He is the author of two earlier acclaimed story collections, Taking Cover (Oberon, 1982) and Foreign Affairs (Stoddart, 1985). His novel, Popular Anatomy (PQL, 1995), won the 1996 Chapters/Books in Canada First Novel Award. He has travelled extensively throughout the world and has edited the best selling international anthologies Bad Trips (Vintage, 1991) and Worst Journeys: The Picador Book of Travel (1992). He was born and raised in Vancouver, where he lives at present, and is a director of Canada India Village Aid (CIVA).

“Charity—for all its brevity—[is] a dense, deliberately paced work … a sincere examination of family in all its moral ambiguity, including its barbed and occasionally corrosive aspects … Fraser is adept at pulling the rug out from under a reader’s moral surety.”—Steven W. Beattie

“The sheer exuberance of language, the sureness with which Fraser captures the movements of the working mind, makes this book a joy to read.” —Ottawa Citizen

"The range of Fraser's characters is astonishing…not an author who can be ignored.”—January Magazine

“If you really want to journey into the heart of darkness, you'd be advised to travel with Vancouver writer Keath Fraser, a man of extraordinary talents.” —Bronwyn Drainie

“Keath Fraser is one of the most intelligent writers working in Canada.” —The Malahat Review

Other titles by Keath Fraser

The Luck of Ginger Coffey

Travels with a Glass Throat

As for Me and My Body

A Memoir of Sinclair Ross