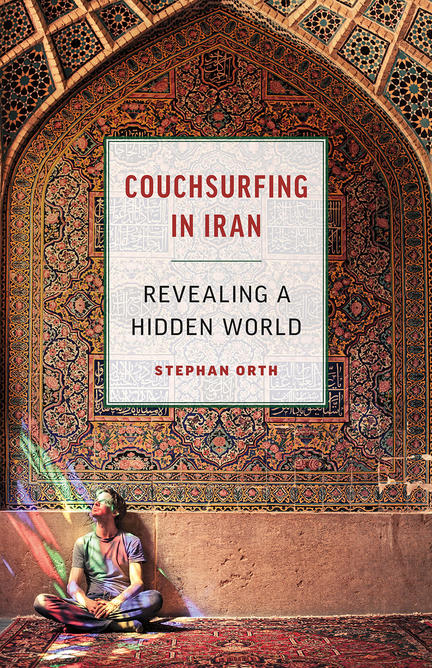 A modern-day glimpse into the surprising reality of life in Iran.

Iran: A destination that is seldom seen by westerners yet often misunderstood. A country that simultaneously “enchants and enrages” those who visit it. A place where leading a double life has become the norm.

In Couchsurfing in Iran, award-winning author Stephan Orth spends sixty-two days on the road in this mysterious Islamic republic to provide a revealing, behind-the-scenes look at life in one of the world’s most closed societies. Through the unsurpassed hospitality of twenty-two hosts, he skips the guidebooks and tourist attractions and travels from Persian carpet to bed to cot, covering more than 8,400 kilometers to recount “this world’s hidden doings.” Experiencing daily what he calls the “two Irans” that coexist side by side—the “theocracy, where people mourn their martyrs” in mausoleums, and the “hide-and-seek-ocracy, where people hold secret parties and seek worldly thrills instead of spiritual bliss”—he learns that Iranians have become experts in navigating around their country’s strict laws.

Though couchsurfing is officially prohibited in Iran—the state fears spies would be able to travel undetected through the country—more than a hundred thousand Iranians are registered with online couchsurfing portals. And thanks to these hospitable, English-speaking strangers, Orth gets up close and personal with locals, peering behind closed doors and blank windows to uncover the inner workings of a country where public show and private reality are strikingly opposed.

Stephan Orth is an award-winning journalist and best-selling author. For nine years, he was online travel editor for Der Spiegel, one of Germany’s top news magazines, and he has contributed to National Geographic, the Courier-Mail, and Time Off magazine, among other publications. His next book, Couchsurfing in Russia, will publish in fall 2018. He lives in Hamburg, Germany.

"Orth used the internet to launch himself into a fantastical realm that happens to be real." — Liesl Schillinger, New York Times

"A breezy narrative that offers a couch-level view of Iran that you won't find in travel guides." — Kirkus Reviews

Other titles by Stephan Orth

Revealing Encounters Inside the Real China

Friendships and Misadventures Inside Russia

Other titles by Jamie McIntosh

Why the Sea Glows, Fish Sing, and Other Astonishing Insights from the Ocean

Revealing Encounters Inside the Real China

Real Stories from a Therapist's Office

These books take their readers beyond Canadian borders to portray the rich lands, cultures, and adventures that can be discovered in other parts of the …