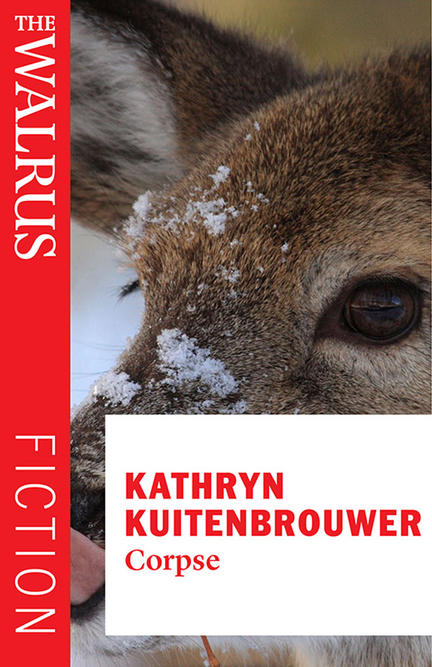 The newest Walrus e-single, Corpse, is the story of a wintery Friday night gone awry when a young boy goes deer hunting in an urban park. A humorous meditation on absences, death, and, of course, love. “THEN MAURA’S KID, Malcolm, thirteen, was standing there.'What are you two laughing about? Tell it to me.' He thought they had a joke. He was holding a yew bow he had fashioned that morning, along with a carbon steel–bladed Opinel knife, number seven, and a relatively straight stick, maple or oak, the women couldn’t tell.'Close the knife, darling,' Maura said, and gave him that look. 'Rules,' she added.”

Critics described the stories in Way Up, Kathryn Kuitenbrouwer's first book of fiction, as "some of the most impressive examples of new Canadian fiction in recent memory." Published in 2003, Way Up received a Danuta Gleed Award and was a finalist for the Relit Award. The Nettle Spinner, her first novel, was shortlisted for the Amazon.ca/Books in Canada First Novel award and was also named a best of 2005 by January magazine. Kathryn Kuitenbrouwer is the former fiction editor of The Literary Review of Canada and has also worked as a tree-planter, a lumberjack, and a baker. Her reviews have appeared in The Globe and Mail, The San Francisco Chronicle, The Toronto Star, and The National Post. She teaches creative writing at the University of Toronto and is the Magazine Editor for Bookninja.com.

Praise for Perfecting: “Usually, this is the part of the review where I find minor fault, something to complain about so it doesn’t seem that I’m raving. Truth be told, there’s no fault to be found in Perfecting: it’s a powerful story, brilliantly told, and it surprised me from its opening page to its closing words. It’s all I want in a book, and I’m grateful that I didn’t miss it. You shouldn’t, either.”

Other titles by Kathryn Kuitenbrouwer

What Had Become of Us

All the Broken Things