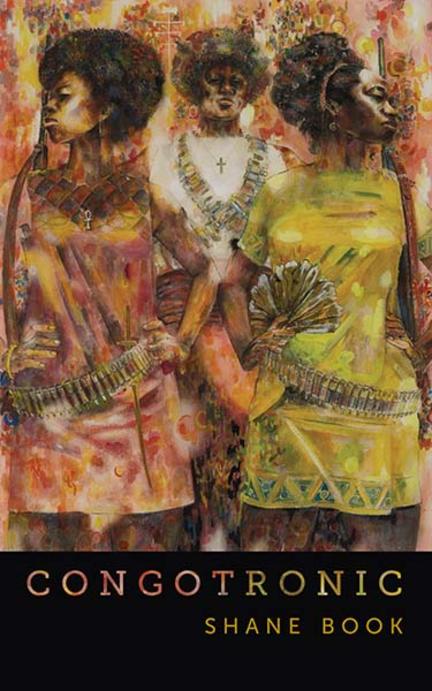 The second collection from Canadian poet and filmmaker Shane Book.

At once original, strange, funny, and unnerving, Shane Book’s Congotronic takes the reader into unstable territory, where multiple layers of voice, diction, and music collide. Some of these poems have the sparse directness of a kind of bleak prayer; others mingle the earthbound rhythms of hip-hop with the will-to-transcendence of high Romanticism.

Harnessing techniques of the cinematic and audio arts, Book’s poems splice, sample, collage, and jump-cut language from an array of sources, including slave narratives, Western philosophy, hip hop lyrics, and the diaries of plantation owners.

The book’s anchoring series contains an apocryphal narrative grounded in the journey of the Middle Passage and an older mythic history from the West African epic of Sundiata. Here is a world poet of the Sonic Global South sheathed in a Northern Hemispheric glow suit, high “on Coltrane, on Zeus” but also on the old and new schools of Descartes, M.I.A., Cecil Taylor, Gilbert Ryle, Freud, and Jay-Z, among others — or as one poem puts it, the "aural truths."

Shane Book is the author of Ceiling of Sticks, winner of the Prairie Schooner Book Prize in Poetry and the Great Lakes Colleges Association New Writers Award. He is also a filmmaker whose award-winning work has screened around the world. He was educated at the University of Western Ontario; the University of Victoria; the Iowa Writers’ Workshop; and Stanford University, where he was a Wallace Stegner Fellow. His writing has appeared in numerous journals and magazines and in more than twenty anthologies, including Breathing Fire 2: Canada’s New Poets and The Great Black North: Contemporary African Canadian Poetry.

Other titles by Shane Book