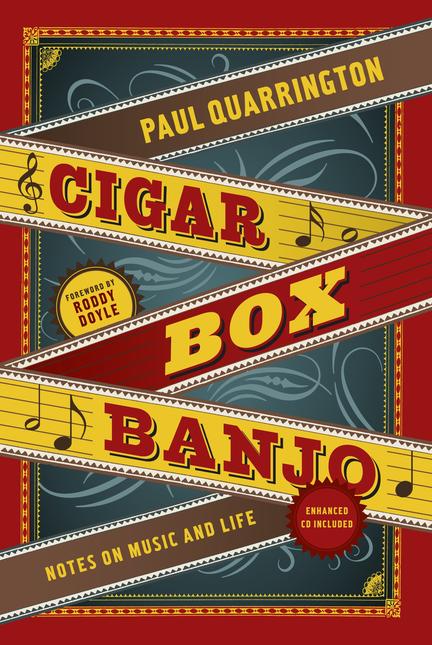 A musician and writer's memoir looks death in the face and reminisces about a life in song.

As a kid, Paul Quarrington had a favourite song. In it, a boy fashions a banjo from a cigar box, pluckily sets off for a music contest in the next town, and wins with a song that weaves in the sounds he'd heard on his way to the contest: a bluebird trilling, truck tires whining, the lowing of a cow. Now, a writer and musician himself, Quarrington still relates to this musical tale: his sudden and recent diagnosis of stage-four lung cancer has him pondering the path his own life has taken and the music it's made along the way. The result of this personal retrospective is an eclectic, hilarious, and moving book that tracks a life lived in music and words. Quarrington ruminates on the bands of his childhood; his restless youth spent playing bass with the cult band Joe Hall and the Continental Drift; and his incarnation, in middle age, as rhythm guitarist and singer with the band Porkbelly Futures. From rock 'n' roll, to the blues, folk to country to soul, he explores how songs are made, how they work, and why they affect us so deeply. In his imitable and entertaining way, Quarrington also recounts the adventures and vicissitudes he and his fellow band members share as they cope with everything from broken strings to broken marriages, as they make a last stab at that elusive thing called success. Paul Quarrington is an acclaimed nonfiction writer, novelist, and screenwriter. His most recent novel, The Ravine, was long-listed for the Scotiabank Giller Prize. Quarrington received the Stephen Leacock Medal for Humour for his novel King Leary, which was also the victor in "Canada Reads 2008." Also available in paperback.

Paul Quarrington won numerous awards for his work, including the Stephen Leacock Award for Humour and Canada Reads 2008 for his novel King Leary. His Governor General's Award-winning Whale Music was made into a critically acclaimed feature film. He also won awards for his writing for the television series Due South and for his screen play for Perfectly Normal. On January 21, 2010, he succumbed to lung cancer and died at his home surrounded by friends and family. He is missed.

Roddy Doyle is the author of eight novels, a collection of stories, and a memoir. He won the Booker Prize in 1993 for Paddy Clarke Ha Ha Ha. He lives and works in Dublin.

Quarrington's memoir is an elegant eulogy for deep culture. Without ever losing the same light tone, he sketches a vivid picture not only of his own eventful life but of an entire generation of 20th-century rebels whose accomplishments, like his own, are becoming clear only as they disappear. —Globe & Mail

Paul Quarrington's final outing is a delightful memoir and an uplifting epitaph . . . Rich with an acerbic wit, The Cigar Box Banjo is a treat. Self-effacing and humble, and never maudlin or self-pitying, Quarrington peppers his pages with wonderful anecdotes of his musical coming of age, and the trials, tricks, and trauma that come with being a travelling band in a broad country. —Winnipeg Free Press

Quarrington's honesty, candour and willingness to share this unalterable part of his life is remarkable, resulting in a documentary filled with sweet, bitter and poignant moments. —Bravo

This final work from the late, beloved and multitalented Quarrington (writer, musician, fisherman, trivia maven) focuses on his life as experienced from inside the music. Facing death with great courage, Quarrington just kept on rocking. —Globe & Mail

Prior to his death, Quarrington wrote his final book, the engagingly ruminative Cigar Box Banjo: Notes on Music and Life. No literary reflective, this is a memoir powered by a love of music. —Toronto Star

The book Paul Quarrington produced as a last gift to his many fans is in a category of its own, a layered, rambling, deceptively casual mixture of music history, coming-of-age narrative and reflection on mortality. —Globe & Mail Top 100 Books for 2010

Cigar Box Banjo: Notes on Music and Life . . . is a celebration of those things [Quarrington] valued most: music, friends, food, travel, and writing. While etched with sadness, it is nonetheless a joy to read . . . Cigar Box Banjo is the perfect testament to the man, and to his work. He will be missed. —Georgia Straight

Paul Quarrington focuses on his subject (music) without wavering, even though death's waving at him through the peephole. He writes an unabashed, unsentimental and beautiful treatise on how a life spent dabbling, experimenting is still a life spent in study and devotion, a life well lived. —The Coast

Among his final projects were three music CDs; a memoir, Cigar Box Banjo . . . that charts his life in song; and a documentary that follows him on tour to his final months. These threads were interwoven in the way his projects had always been, as if he conceived of culture not as something set apart but as the living, breathing texture of daily life. Something that meant simply being alive to your own story, and being willing to tell it whatever way you could. —Nino Ricci, Quill & Quite

Cigar Box Banjo is the work of passion, of a writer trying to defy the odds of time to make one last trip to the well . . . It's a rollicking ride across musical genres and time, one that shows its author trying to squeeze every ounce of life onto its pages. One couldn't have asked for a nicer ending . . . for a guy who was seemingly as nice as Paul Quarrington. —Popmatters.com

Cigar Box Banjo is a book almost utterly free of sentiment, regret or anger. First and foremost, it is funny, perceptive and sometimes, oftentimes, blushingly self-deprecating. In this it is Quarrington . . . at his essential, bull-free best. —Toronto Star

Cigar Box Banjo is full of those qualities that aroused such love for Quarrington—the good humour, the lack of pretentiousness, the warmth, the generosity, the grit he demonstrated in pursuing his art. —National Post

An enthralling read, a wonderful mingling of musicological musing and personal memoir, made more poignant as we are aware of the ending before we begin. —Wholenote

The 'Life' sections of the book . . . explode with Quarrington's personality and include road stories as he travels from one gig to another. —Ottawa Citizen

It's doubtful we will see a better memoir this year than Paul Quarrington's Cigar Box Banjo . . . He doesn't shy away from exploring in detail his own dark journey toward death, but the path is illuminated with humour, courage, [and] generosity. —Waterloo Region Record