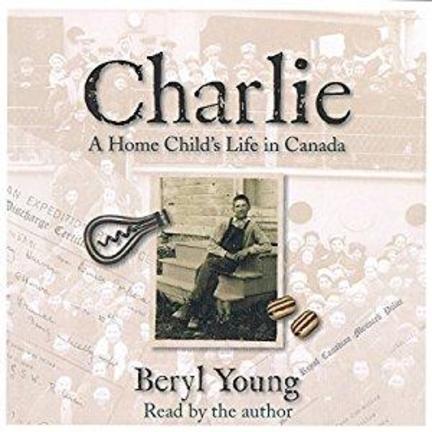 The House of Commons voted in a unanimous decision on December 7, 2009 to make 2010 The Year of the Home Child across Canada!

The story of the 100,000 British children who came to Canada as child immigrants between 1870 and 1938 is not well known. Yet the descendants of these &ldquo;Home Children&rdquo; number over four million people in Canada today. The author is one of them. Charlie was her father. Charlie is a compelling account of a poor English boy who rises from poverty to become a valuable member of Canadian society. Charlie&rsquo;s story, like many others, is an inspiring part of our Canadian heritage, and will fascinate adults as well as children.

&ldquo;A warm, candid look back at the life of a man who struggled to secure a place for himself in the new world. Along with the author&rsquo;s gentle and fluid narrative, the tome is seasoned with a smattering of sepia photographs of days gone by.&rdquo; — Halifax Chronicle Herald

Beryl Young is the author of the best-selling young adult novel Wishing Star Summer (Raincoast, 2001). The book was on the Victoria Times Colonist BC Children’s Bestseller list for twenty-six weeks, was named to Our Choice book by the Canadian Children’s Book Centre, and received nominations for the Red Cedar Award (BC), the Chocolate Lily Award (BC) and the Diamond Willow Award (SK). Young is a member of the Federation of BC Writers, the Children’s Writers and Illustrators of BC, the Writers Union of Canada, and the Canadian Society of Authors, Illustrators and Performers. In the autumn of 2009, she published, to great acclaim, Charlie: A Home Child’s Life in Canada (Key Porter). She has a passion for elephants and for India, where she has travelled three times in an unsuccessful search for her real life pen pal. She lives in Vancouver, British Columbia. Beryl has three children and four grandchildren.

When his father dies suddenly, Charlie Harvey’s mother can no longer support her family so Charlie is sent to a Dr. Barnardo home. At 13, he travels to Canada, one of thousands of British children sent to work on farms in the hope of a better future. Although his first placement is difficult, Charlie is eventually taken in by a loving family. He joins the army in WWI and is wounded in the Battle of the Somme. Returning to Canada he joins the North West Mounted Police, eventually becoming an Inspector in the RCMP.

This is a second edition of the book in which the author has reconstructs her father’s life from family stories and archives including those of Barnardo Homes. Sidebars throughout the text provide additional factual information.

This is the story of Charlie, one of the 100,000 British children who came to Canada as child immigrants between 1870 and 1938. Charlie experienced homesickness and hardship and eventually great kindness and went on to become a valuable member of Canadian society. This book is rich with archival material, including letters, photographs and informative sidebars. Originally published in 2009, by Key Porter Books (Best Books for Kids & Teens 2010 Starred Selection).

Young tells the story of her father, Charlie Harvey, who was one of 90,000 home children — British children who immigrated to Canada between 1870 and 1938. Archival and personal photographs, sidebars and a bibliography accompany this warm and frank chronicle of a lesser-known yet crucial chapter of Canadian history.

Other titles by Beryl Young

Show Us Where You Live, Humpback

A Boy From Acadie