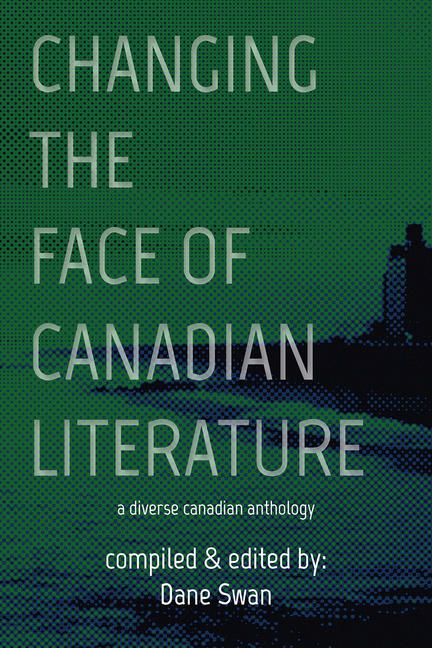 A g call to action and accountability. – Shelagh Rogers

Needless to say, moments like now, when the hurdles to becoming a respected author are at their lowest. When the only hurdles to being published are the quality of your writing and your patience to deal with certain less and less important gatekeepers. Moments in history like this, must be acknowledged and celebrated. That's what this anthology is: It's a celebration. A moment to cry out, “Look how many of us have a voice! There are stories, and poetry in this country that are about people like me! I am not alone!”

Dane Swan is a Bermuda raised, Toronto based, internationally published poet, writer, and musician. His first collection, Bending The Continuum, was published by Guernica Editions in the spring of 2011. The collection was a recommended mid-summer read by Open Book Toronto. In 2016 Guernica also published his second collection of poetry, A Mingus Lullaby, a finalist for the 2017 Trillium Book Award for Poetry. His first novella, Tuesday, is forthcoming from Grey Borders Books.
Dane is also an accomplished slam poet and touring spoken-word performer, placing second at the Canadian Festival of Spoken Word, third at the Rust Belt Regional Slam and touring the US Midwest and West Coast regions. His poetry has been taught in schools and has been published in France, the UK, Bahamas, and Canada. His spoken-word work can be found in solo projects and collaborations available on CD, vinyl and MP3. He has read alongside numerous literary luminaries including Lawrence Hill, George Elliott Clarke, Goran Sumic, Priscila Uppal, Gianna Patriarca, and spoken-word stars including Shayne Koyczan, Dwayne Morgan, and Lillian Allen. He will be a featured author at the 2017 International Festival of Authors in Toronto.
The Bermuda born, Jamaican heritage writer is currently a member of the Writers Union of Canada.

This anthology is animated by many voices and they all seem to speak to each other across the pages. Dane Swan's foreword is provocative and imaginative — for instance, asking the reader to consider what classrooms would be like if the dub poets were taught alongside/instead of the Confederation Poets. I mean, wow! The opening essay concludes with 'Congratulations, Canada, you finally have a literature that looks like the people who inhabit you. Do not take this moment for granted.' A great read and a call to action and accountability.

Changing the Face of Canadian Literature comes close to accomplishing what the title proclaims. Swan acknowledges the extensive library of anthologies that have sought – more or less effectively – to bring equity to the publishing scene. This one authentically captures a literary moment that is alive and exciting, a moment that will, with ongoing vigilance, continue evolving in ever more inclusive directions."

Other titles by Dane Swan

Love and other failed religions