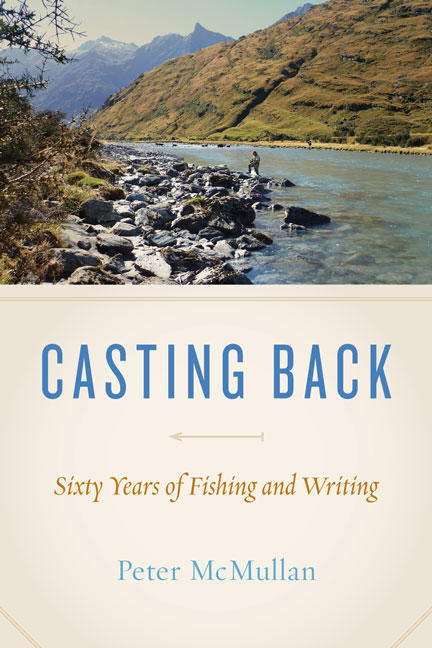 Covering a span of more than 60 years, these classic fishing essays are brought together for the first time, celebrating the thoughts, pleasures and adventures of a devoted angler and renowned storyteller as he fishes some of the timeless streams of Ireland, New Zealand and British Columbia.

Through the pages of Casting Back Peter McMullan takes the reader from his youthful Irish beginnings in the 1940s to his time as a young journalist in Northern Ireland during the mid-1950s, through the 1960s and into today’s western Canada and a totally different sport fishing environment.

Pike and bream, roach, tench and perch were his original targets – what British and Irish anglers call “coarse” fish. Then, with experience and the passage of time, came brown trout and Atlantic salmon – the more highly regarded “game” fish – as angling with lures and sometimes even “garden olives” gave way to dressed silk lines and fine handmade rods crafted from split cane. Moving from Northern Ireland to British Columbia in the 1970s brought an entirely new dimension to McMullan’s fishing life, as there were now Pacific salmon and legendary steelhead to be caught in stunning rivers too numerous to name.

The author’s recollections range from stories of being that boarding school boy who would slip away from his still-sleeping dormitory before dawn to fish for tench, to the time when an Irish pig stole his salmon, to an encounter with a black bear in British Columbia that just might have been a serious threat. Pivot from there to reflections on the lives of commercial fishers of herring in the Irish Sea and trout in Lough Neagh, the largest freshwater lake in the British Isles, and finally to the ruminations of a now very experienced angler fortunate enough to travel twice to New Zealand to seek out big trout.

There is one more tale that just had to be included, and for the very first time it can be told. A yarn involving a nine-weight fly rod, a police bomb squad and one of the biggest international events to be staged in Canada in recent years. Definitely hard to believe, but all too true.

Peter McMullan has been writing about fly-fishing for almost 60 years. Trained as a newspaper reporter and later as a sports and fishing journalist, he came to Canada from Belfast, Northern Ireland, in 1971, with his wife Daphne and two young sons, to edit a daily paper. He later moved into corporate and then professional-sports communications. Peter has been passionate about fishing all his life, contributing to magazines and newspapers in Ireland, England, Scotland, Finland and Canada. Along the way his fly rods have been tested by Atlantic and Pacific salmon, steelhead, brown and rainbow trout and from time to time by other species as well. It was the big-fish reputation of the Babine River in British Columbia and its long-standing sport fishing traditions that in 2010 led Peter to conceive and co-author the book Babine: A 50-Year Celebration of a World-Famous Steelhead and Trout River (Frank Amato Publications). He lives in Nanaimo, British Columbia.

The content of this book is exactly what we, fly fishers all over the world, like to read. Peter has been writing and fly fishing himself for over 50 years now. It is a remarkable achievement and as Peter told us, this book has been on his mind for a longtime. Now it was the right time to have this out for the readers.

Other titles by Peter McMullan