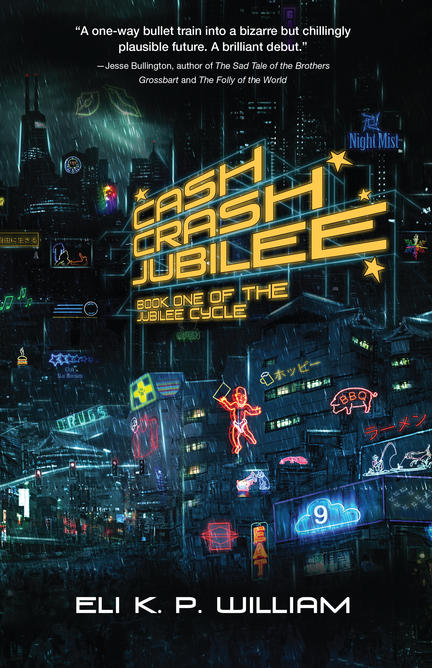 A cyber-dystopian world unlike any other.

In a near future Tokyo, every action?from blinking to sexual intercourse?is intellectual property owned by corporations that charge licensing fees. A BodyBank computer system implanted in each citizen records their movements from moment to moment, and connects them to the audio-visual overlay of the ImmaNet, so that every inch of this cyber-dystopian metropolis crawls with information and shifting cinematic promotainment.

Amon Kenzaki works as a Liquidator for the Global Action Transaction Authority. His job is to capture bankrupt citizens, remove their BodyBank, and banish them to BankDeath Camps where they are forever cut off from the action-transaction economy. Amon always plays by the rules and is steadily climbing the Liquidation Ministry ladder.

With his savings accumulating and another promotion coming, everything seems to be going well, until he is asked to cash crash a charismatic politician and model citizen, and soon after is charged for an incredibly expensive action called “jubilee” that he is sure he never performed. To restore balance to his account, Amon must unravel the secret of jubilee, but quickly finds himself asking dangerous questions about the system to which he’s devoted his life, and the costly investigation only drags him closer and closer to the pit of bankruptcy.

In book one of the Jubilee Cycle, Cash Crash Jubilee, debut novelist Eli K. P. William wields the incisive power of speculative fiction to show how, in a world of corporate finance run amok, one man will do everything for the sake of truth and justice.

Skyhorse Publishing, under our Night Shade and Talos imprints, is proud to publish a broad range of Titles for readers interested in science fiction (space opera, time travel, hard SF, alien invasion, near-future dystopia), fantasy (grimdark, sword and sorcery, contemporary urban fantasy, steampunk, alternative history), and horror (zombies, vampires, and the occult and supernatural), and much more. While not every Title we publish becomes a New York Times bestseller, a national bestseller, or a Hugo or Nebula award-winner, we are committed to publishing quality books from a diverse group of authors.

Eli K. P. William is the author of the Jubilee Cycle, three novels set in a dystopian future Tokyo: Cash Crash Jubilee, The Naked World, and A Diamond Dream. Originally from Toronto, Canada, he has lived in Japan for over a decade and has spent most of that time working as a Japanese translator. A Man is his first full novel translation to be published. For more information, visit www.elikpwilliam.com.

"Debut novelist William reverses the outsider perspective of cyberpunk in this
intricate tale of a digitally claustrophobic future."
?Publishers Weekly

?Eli K. P. William’s book is prophetic and chilling in the best of ways, darkly sardonic yet filled with compassion.”
?Gordon Dahlquist, author of The Glass Book of the Dream Eaters

?Cash Crash Jubilee is a roller-coaster ride of action and political speculation, all set against a vivid urban backdrop lit by total corporate domination of human life. Writing in the tradition of Dick and Gibson, Eli K. P. William leverages the details of near-future dystopian Tokyo to superb critical effect. A terrific debut!”
?Mark Kingwell, author of Concrete Reveries and The World We Want

?What is truly phenomenal about Cash Crash Jubilee, and what has held my attention, is the world building. Everything is explained, described, or illustrated in a way that makes sure the reader is never confused, but that also doesn’t hinder the development of the plot in any way. It’s an action-packed techno thriller. And after reading it, I’ll never take something as simple as staring up at the night sky for granted again.”
?BookRiot

?Combines 1984’s brutal totalitarianism and Brave New World’s seductive consumerism. Its premise is both horrifying and ridiculous. Is it a satire or a thriller? It works brilliantly as either.”
?John Love, author of Faith and Evensong

?A stunning debut novel, a glorious and disturbing view of a strange new world that could easily become our new world. Fans of Neal Stephenson and William Gibson will find much to enjoy in Cash Crash Jubilee.”
?Wayne Arthurson, author of Fall From Grace and A Killing Winter