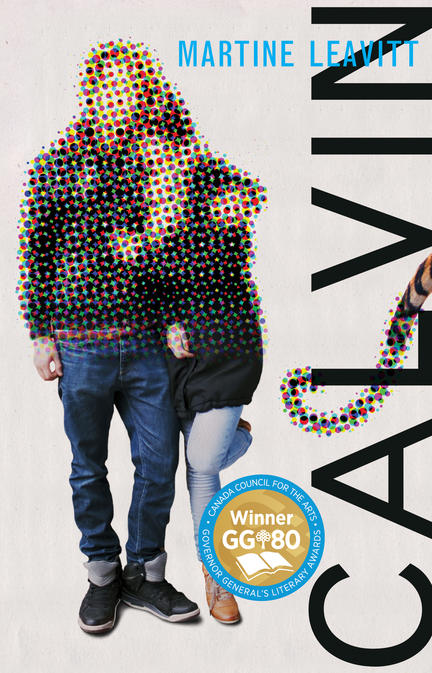 In the town of Leamington, Ontario, a seventeen-year-old boy is suddenly stricken by a schizophrenic episode and wakes up in hospital. The boy’s name is Calvin, and he is plagued by hallucinations.

As the hallucinations persist, Calvin comes to believe that the answer lies in performing one grand and incredible gesture.

And so he decides to walk across Lake Erie. In January. The temperatures have been below freezing for weeks. The ice should hold…

The lake, it turns out, is more marvelous, and more treacherous, than Calvin had ever imagined — populated by abandoned cars (joy ride!), ice-fishing eccentrics, psychokiller snow beings, and a not-so-mythical sea witch named Jenny Greenteeth.

Not to mention the man-eating tiger that looms just out of his sight lines as he treks.

But the biggest surprise of all is that Calvin finds himself accompanied by Susie, the girl of his dreams. Or is it his dreams that have conjured up Susie?

Part romance, part adventure story, part quest novel, Martine Leavitt brings her inimitable gentle wit, humor and compassion to a story about a teenaged boy struggling to gain control of his own mind and destiny.

Martine Leavitt has published eight novels for young readers, most recently My Book of Life By Angel, which received five starred reviews, was a finalist for the Los Angeles Times Book Prize, a Junior Library Guild Selection, a Horn Book Fanfare book, a Booklist best book of the year, and winner of the Canadian Library Association Young Adult Book of the Year. Other titles include Keturah and Lord Death, a finalist for the National Book Award, Tom Finder, winner of the Mr. Christie's Book Award, and Heck Superhero, a finalist for the Governor General’s Award. Her novels have been published in Japan, Korea, Denmark, Germany, Switzerland, Italy and the Netherlands. Currently she teaches creative writing to graduate students at Vermont College of Fine Arts. She is a mother of seven, grandmother of fifteen, and lives in High River, Alberta.

Funny, intellectual, and entertaining, it’s a sensitive yet irreverent adventure about a serious subject.

Equal parts coming-of-age tale, survival adventure, and love story, this outstanding novel also sensitively deals with an uncommon but very real teen issue, making it far more than the sum of its parts.

A fresh, funny voice that never diminishes the seriousness of schizophrenia. . . . Leavitt delivers an imaginative exploration of mental illness, examining what’s real and what’s true in this magical world.

This is a gentle and unique story about a boy struggling with schizophrenia; while Calvin is indeed having grandiose visions that include a beloved cartoon character, he is funny, charming, and smart.

Other titles by Martine Leavitt

My Book of Life By Angel

International Day of People with Disabilities