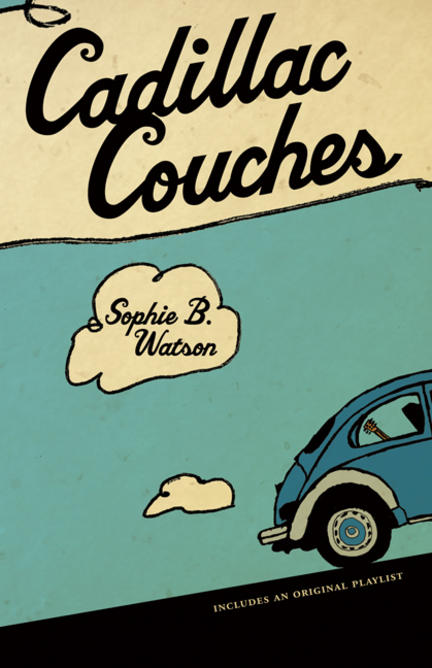 Cadillac Couches is a picaresque road trip novel that journeys from prairie to big city and back again. A quixotic tale set in the late nineties and framed by the popular Edmonton Folk Music Festival, it follows two music-smitten twentysomething women as they search for love and purpose. Annie Jones is trying to put her big love, Sullivan, behind her and squash her demons of anxiety and compulsion. In a post-fest funk, she and her more worldly sidekick Isobel jump in Annie's 1972 Volkswagen Beetle and race across the country to Montreal where her real-life fantasy man, Hawksley Workman, is doing a gig. A year later Annie and Isobel end up back at the folk festival, this time in a much different position.

A witty first novel, Cadillac Couches is a story about finding one's holy grail in life. The book comes with its own playlist.

Sophie B. Watson is an award-winning freelance writer who has been published in several magazines, including Briarpatch Magazine, Canadian Dimension, Canadian Living Magazine, Legacy Magazine, and Sustainable Times (among others). She holds a degree in English and French literature from the University of Alberta as well as a master's in creative writing from Bath Spa University. She has been a library page, a waitress, a substitute dj, a bookseller, and, most recently, the editor of Cork University Press. Cadillac Couches is Sophie's first novel. Read more about Sophie (and her aquatic larks) on her blog at sophiebwatson.com.

Sophie B. Watson talks to CBC Music about her musically inspired road trip novel Cadillac Couches, and why she included Hawksley Workman in the story, and Hawksley responds.

This novel has a blend of Will Ferguson-like love/despair of Canada, with the contemporary zing of writers like Susan Isaacs, M.A.C. Farrant and Susan Juby. But Cadillac Couches is entirely its own being and I highly recommend getting to know it! —Fabbity Fab Book Reviews

I love this angsty, already-of-age, road trip tale of idealistic music worshipping and very real people who party and suffer as only post-eighties people know how! —Ben Sures, singer-songwriter

The road trip that accounts for the majority of the novel helps keep the story moving at a brisk pace, while also making the book as much an ode to Canada as to music. —Quill & Quire

I really liked Cadillac Couches, a silly, sprawling road-trip novel with its very own soundtrack . . . The whole package casts a spell. For those of us who came of age in the 1990s, Cadillac Couches is a bit like a scrapbook, the coolest bits of every diary you ever kept. Watson shuns convention with her book’s conclusion too, its happily ever after coming courtesy of a refreshing dose of grrrl power. —Pickle Me This blog

Listen to Sophie B. Watson's interview with Paul Kennett on CJSW's Writer's Block. She's talking music and fiction and how the two intersect in her novel, Cadillac Couches.

It's that time of year again, folk festival season, when music lovers gather on hillsides to hear the strains of their favourite folk tunes, which are …