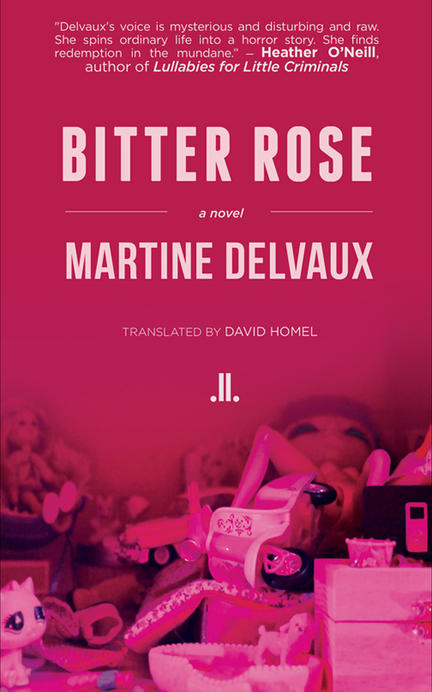 A little girl is growing up in an Ontario village. Her father has taken off, and the world is full of dangers she doesn't understand. Her friends have names like Manon-just-Manon, BB, and Valence Berri, and things seem pretty okay, most of the time, except that girls keep disappearing. When she leaves the village for a suburb of Ottawa and then moves downtown and beyond, she never looks back.

Novelist Martine Delvaux was born in Quebec City and brought up in a francophone village in Ontario. She is the author of four novels, an essay on photographer Nan Goldin, and another on Serial Girls from Barbie to Pussy Riot (Fall 2016, Between the Lines). Her first book in English, Bitter Rose (translated by David Homel) was published by LLP to critical acclaim in 2015. Delvaux studied in the United States, taught in England, and now lives in Montreal, where she teaches women’s studies at Université du Québec à Montréal.

David Homel has translated over 30 books, many by Quebec authors. He won the Governor General's Literary Award in translation in 1995 for Why Must a Black Writer Write About Sex? by Dany Laferrière; his translation of Laferrière's How to Make Love to a Negro was nominated in 1988; and he won the prize in 2001 with fellow translator Fred A. Reed for Fairy Wing. His novels, which include Sonya & Jack, Electrical Storms, and The Speaking Cure have been published in several languages. Homel lives in Montreal, Quebec.

"Delvaux's voice is mysterious and disturbing and raw. She spins ordinary life into a horror story. She finds redemption in the mundane. Her girls are ugly on the inside, and therein lies their strange, explosive beauty." - Heather O'Neill, author of Lullabies for Little Criminals and The Girl Who Was Saturday Night"Fans of the gritty realism in works by Quebec authors such as Heather O'Neill or Rawi Hage will find another favourite in Delvaux." -- The Humber Literary Review (Spring-Summer 2015)

Other titles by Martine Delvaux

From Barbie to Pussy Riot

Last Bullet Is for You, The

Other titles by David Homel

Lunging into the Underbrush

The Lily Pad and the Spider

A Journey through Beijing's Forbidden Underground

The Weight of Snow

Stories and Anecdotes from the Back Seat