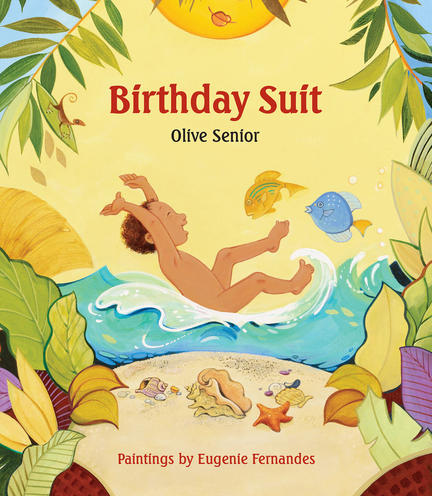 Johnny loves nothing better than splashing in the ocean waves—naked.

But Mom says now that he’s four he’s too old to run around without clothes on. She even buys him a pair of overalls with genuine 100 percent child-proof snap fasteners! But they’re no match for Johnny as he wriggles out of them.

Johnny’s father explains that big boys wear clothes. Doesn’t he want to be big like Dad? As Johnny gazes up, he decides that wearing clothes may be a small price to pay to reach such heights. Everyone is happy as Johnny practices putting on his clothes. And now when he runs into the ocean, he makes sure to take his red swimsuit—but that doesn’t necessarily mean he’ll always wear it!

Imbued with the lilt of the Caribbean and featuring illustrations that capture the warmth and humor of the text, this charming picture book is sure to amuse young children—naked or not!

Olive Senior was born in Jamaica in 1941. She lives both there and in Canada. Her first collection of short stories, Summer Lightning (1986), won the Commonwealth Literature Prize. She has published two subsequent collections of short stories, The Arrival of the Snake Woman (1989) and The Discerner of Hearts (1995). She has two collections of poems, Talking of Trees (1985) and Gardening in the Tropics (1995). She has written on different aspects of Caribbean culture and was editor of Jamaica Journal.

EUGENIE FERNANDES loved exploring the outdoors and making her own little books when she was young. As an adult she has combined these interests by creating books such as Ribbon Rescue, The Tree that Grew to the Moon, Waves in the Bathtub, One More Pet, and Grandpa Dan's Toboggan Ride.

Eugenie is part of a very artistic family. Her father was a comic book illustrator, her husband, Henry Fernandes, is a picture book illustrator who collaborated with her on the book Ordinary Amos and the Amazing Fish, and her two children are also artists. Eugenie lives near Peterborough, Ontario, where she works in a studio that is surrounded by water and woods.

“This delightful book will elicit giggles from three-to six-year-olds and knowing smiles from parents.”

“Enthusiastic junior nudists everywhere will unite behind this one.”

“This cute book will certainly amuse the younger set and evoke fond (or not so fond) memories in anyone who has had to chase a naked toddler.”

“Fun and engaging, the poetic use of language rich and lyrical.”

“A lot of parents and kids will be able to relate to this delightful tale of unencumbered toddlerhood!”

“The story has a lovely rhythm and illustrator Fernandes captures the exuberance of childhood beautifully with her vibrant illustrations.”

“A fun book to read to children.”

“Comical events will appeal to young children who can identify with strong-willed, independent-thinking Johnny.”

“Olive Senior . . . lends her poetic flair . . . with snappy sounds and rhythms . . . Eugenie Fernandes adds to the lush scenery with warm, vibrant paintings that exude as much energy as Johnny himself.”

“Fernandes’ bright, busy paintings are a good match for the buoyant and ample text, which is full of phonic riffs that make the tale a terrific read-aloud.”

“The voice of Jamaica is in poet Olive Senior’s lilting prose, and the lively illustrations are painted in Fernandes’s signature child-friendly style.”

“Johnny likes to run around / naked.” So begins this charming tale about an “almost” four-year-old who refuses to be contained by clothes. “Ha-ha, sea. It’s me!” Johnny cries, thinking the sea cannot recognize him in the swimming trunks he shuffles off when his mother turns her back. Frustrated by Johnny’s ability to slip out of any manner of clothing, his mother finds overalls that fasten with “evil metal monsters.” It is a talk with his father, however, that makes Johnny consider the benefits of joining the attired world.

Written in free verse, Senior’s text reads like a sing-song conversation sprinkled with repetition, onomatopoeia, lists and different types of rhyme (e.g., internal and oblique). Use of the present tense and colloquial “you” adds to the story’s immediacy. From the control of language demonstrated in this text, it is no surprise that Senior is an acclaimed poet and writer (she won the Commonwealth Writers’ Prize).

Fernandes’s paintings explode with movement and energy, not only animating the text but enriching it by playing Johnny’s drama against a backdrop of busy, bustling Caribbean life. Flora and fauna, which participate as much in the daily workings of island life as people, wander outside the frame of the picture and into the white space surrounding the text. Fernandes’s warm palette is dominated by yellows and blues. The anthropomorphism, subjective perspective and recurring motifs make her art distinctive.

This delightful book will elicit giggles from three- to six-yearolds and knowing smiles from parents.

Johnny loves nothing better than splashing in the ocean waves — naked. But Mom says he’s too old to run around without clothes on. She tries and tries to get him to keep his clothes on, but to no avail. Finally some wise words from Dad help Johnny see things differently.

Other titles by Olive Senior

Gardening in the Tropics

Over the Roofs of the World

Other titles by Eugenie Fernandes

Today Is the Day