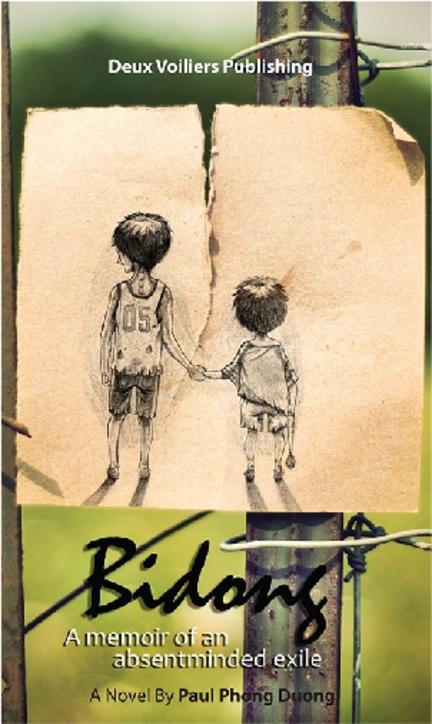 Two brothers leave Vietnam in search of a better life. Together they brave the unforgiving sea and endure a refugee camp before finally landing in a place where they can start a new life. Their bond, strong during the hardship of the journey, is torn apart by the values and culture of western society. One clings to the traditional values and ideas of his homeland, while struggling in a world that is not his own. The other eagerly embraces his new land until forced to answer the ultimate question - who am I?

Paul Phong Duong was born and raised in a little farming village south of Saigon. At the age of ten he left his native land in search of a better future. Just like the two brothers in his novel, he endured many hardships before reaching Canada.

Living on the island, every day became a struggle. The constant fight forfood had become an expectation, and death was no stranger to the lifeof a traitor—a person who abandoned their country. Adding to themisery was the uncertainty over when we would leave. It was as thoughwe had been sentenced for life. Dark clouds hung over our heads andanger rampaged through the camps. Bitterness for the hand we had beendealt led many to drown themselves in alcohol.

To bring some hope into our very chaotic lives, Master, Buon and I begana ritual. Every Wednesday at noon we would gather in front of thepost office and listen to the mail call. We hoped somehow we would becalled to join the few lucky recipients of a Christmas present inJuly. We knew we would never receive anything, but we did it just tokeep some hope alive, because hope was all we had. Without it wewould have ended up like many of the other kids who threw their livesaway on drugs or in gang warfare.

Out of the three of us, Master was the one who had been living in therefugee camp the longest. She had been there two years prior toBuon's and my arrival. Master and her uncle had applied to settle inAmerica before but had been rejected due to a lack of proof ofmilitary service. Her uncle had served alongside the Americans duringthe Vietnam War, but when Saigon fell he burned and destroyed anyevidence of his military past, fearing incrimination.

When the American delegate asked for proof of this claim during theinterview, Master’s uncle was able to recite his service number,his unit and the battalion to which he belonged. However, due to thelack of any physical evidence, the file was put on hold for furtherreview.

Nonetheless, Master never gave up hope. Every few months she and her uncle wouldvisit the administrative office and file an inquiry on the status oftheir application with the hope that someone in that faraway placecalled the United States of America would make the connection, verifythe information and send her a lifeline. Waiting for that day hadkept her working hard on her English and gave her reason to moveforward with her life.

Master was my guiding light during those dark days following my rejection bythe American delegate. Without her to push me forward, I might havefollowed Brother's example and drowned myself in poison. Or perhaps Iwould have jumped off a cliff or wrestled a shark—anything for aquick exit out of that miserable place called a refugee camp. It wasmore a place of torment than a camp. I was young and life was harsh,and I didn’t want to live anymore. I was distraught, and would keepto myself most days. I often went to the beach and just stared outinto the water. I would cry about missing home, cursing my situation.Out of concern, Master would come and drag me back to the library tostudy. She picked me up when I needed her most.

To keep the hope of a future alive and give us something to look forwardto, Master came up with a plan. Sitting in the library, she asked meand Buon to write down what we imagined for ourselves, a career inthe future. She wanted us to remind ourselves of this goal every day,to forget all the wretchedness that was happening in the camp.

Master began. She said that if she ever had the chance to go to school, shewould like to be a social worker. She told me she wanted to helpchildren without parents, like us, and guide them to walk the rightpath. This was a passion she could see herself following because shehad experienced such a bad life herself.

When  it was my turn, I shared with Master and Buon my desire to become ajournalist. I loved to write and to read. I wished that some day Icould help kids who couldn’t walk enjoy reading my stories as muchas I enjoyed writing them.

After I finished sharing my dream, I waited to hear Buon’s. Master and Iturned our attention to him. However, over the course of the timesince we began the writing exercise, he had changed somehow. He keptlooking down at his feet like something had been triggered inside ofhim. When we asked what he wanted to do, he didn’t bother toanswer, he just ignored us completely. Not wanting to agitate Buon,Master and I discussed presenting the idea of the writing exercise toour class.

Mrs. Winona was elated upon hearing the idea. I became the class captain,holding and keeping each of my classmate’s precious dreams. I wouldpass out dream paper every week before class began, and we dedicatedan hour to writing, sometimes adding to our dreams and sometimeschanging them completely. We shaped our futures instead of drowningin our sorrows. We imagined the jobs we were going to have, the foodwe were going to eat and the friends who would endure. We often cameup with unbelievable stories, such as eating rice and fried fish inMcDonald’s or driving cars with wings. The whole class jumped onthe bandwagon to see who could create the most ridiculous dream andthose dreams kept our hopes alive, giving us a reason to come back toclass every week.

The more we enjoyed thinking about the future, the more Buon detested theidea. When the whole class laughed out loud at the mundane fish sauceburger, Buon was quiet and kept to himself. Mrs. Winona asked him tojoin and share with the class, but he just kept looking at his feetand didn’t speak to anyone. He became more depressed as the dayspassed. During class when I encouraged him to write down, “What Iwill do when I settle in another country?” he cocooned himself andignored me. He didn’t bother to pay attention. He just kicked atthe floor.

One afternoon I finally reached a point where I couldn’t handle Buonignoring me any longer so I patted him on the back and asked him tostop. To my surprise, he stood up and walked out of the classroom. Iran after him and called out his name, but he yelled to leave himalone. I went back to class feeling rejected. Mrs. Winona came overand told me that I couldn’t help him anymore. He had to helphimself.

What happened after Buon ran out of the class shocked us all. Mrs. Winonaarrived the next day with tears in her eyes. She sat at her desk andcried for a long time. We all anticipated that something horrible hadhappened, something that was causing our beloved teacher to sob herheart out. After a long silence Mrs. Winona composed herself andstood up, and with great effort she told us that Buon was dead.

My world went dark and I lost my hearing. How could he die? You stupididiot! You can't die! You’re supposed to go on and live the lifeyour parents sacrificed themselves for. You’re a coward. You tookthe easy way out. You were among the children of Heaven, and you hadto be strong like our ancestors. They fought the Chinese and theyfought the French, both powerful enemies. They never quit, ever, andhere you lost only your family and you quit. I hate quitters.

And  then seemingly out of the dark corner of my subconscious mind, Icould hear the laughter of the Sea Devil. It chuckled in satisfactionand told me to let it out of the box. It demanded that I follow in myfriend’s footsteps and think of the past, think of the suffering asif it were the key to unleashing it from the prison where I kept itlocked up. “Let me out,” it screamed and shouted at me. I coveredmy ears, but I could still hear it speaking to me. “Why live in aworld with such sorrow? Come and visit your friend. Buon is righthere. He has released himself from all suffering. You should too.”

The box tempted me. It was right. Why live to endure such painfulexperiences, I asked myself. The voice inside the box was gettinglouder and I could sense the devil was getting stronger. As I let myguard down, the chains that I had wrapped around it were about to bebroken free. With just another strong push it would be all over. Iwould follow Buon, and see him on the other side. I would run to theforbidden beach and jump off a cliff. I stood up and was movingtoward the door to follow through with this when a sudden shakebrought me to my senses. Standing in front of me was Master.

“Are you all right?” she inquired. Without waiting for an answer, shehugged me and I held her tight in my arms. Like the sun peeking outfrom the gray sky, the warmth of her love overtook my body. It calmedthe Sea Devil inside the box. I realized that if I ever let the demoninside this box free it would cost me my life. I took the opportunityand put a wall around it, a survival mechanism, with the hope that itwould be strong enough to contain the darkness inside me.

Life went on, but its rhythm changed. It could never be the same with theknowledge that a friend you had cared deeply about had put a ropearound his neck and jumped off a cliff. Dangling in mid-air, he hadswung back and forth like a goodbye that was never meant to be. Afterhe was gone I cared little about leaving this prison. But sometimesmysterious powers have other ideas.

A forked path for two immigrants

Immigrating to another country is never easy, and it's harder when you don't speak the language or you come from one as different culturally as Vietnam. That's what Tan and Manh discover, two brothers who find themselves awaiting relocation in 1989 on the small Malaysian island of Pulau Bidong. It's a dangerous place for the two young people but older brother Tan does his best to protect his younger brother. Eventually they come to Canada after Manh convinces Immigration to let them in. As he's already learned English, mainstreaming into Canadian society after resettling in Alberta comes easier for him.

It tears the brothers apart, though, as Tan comes to regret leaving Vietnam and his family while Manh successfully integrates and shows a promising career as a journalist. Still, their love for each other prevents them from pulling completely apart, even as Manh's star rises and Tan's descends into substance abuse.

Duong skillfully weaves a tale of strength and resilience, a reminder that no matter what obstacles or dangers we encounter in life, we are made of stronger stuff than we know. It's also a reminder of how difficult integration into Canadian society can be for those who either can't or don't know how to ask for help.