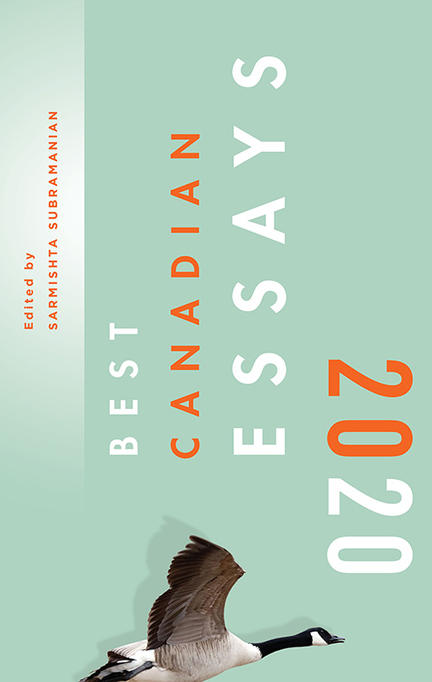 The twelfth installment of Best Canadian Essays speaks with striking prescience to our contemporary moment.

“This book—like most that have found their way into the world this fall—began life in the Before Times,” writes editor Sarmishta Subramanian. Written and first published by leading magazines and journals in 2019, the essays selected here speak with striking prescience to our contemporary moment. From health concerns both global and individual; to decisions about how much of ourselves we should share, online and in person; to surveillance capitalism and cancel culture, public and private concerns intertwine throughout Best Canadian Essays 2020. Just as our current challenges in public health, policing, and justice require researchers, lawmakers, and citizen groups, writes Subramanian, they also require writers. Here she presents sixteen, “essaying in the French sense of the word to think it through.”

Sarmishta Subramanian has been an editor at Saturday Night, The Walrus, National Post, Chatelaine, the Toronto Star, and Maclean’s, where she remains an editor-at-large. She has also produced radio documentaries for CBC’s The Sunday Edition. She was the editor in chief of the Literary Review of Canada from 2016 to 2018.

"The kind of selection one can slide into like a pool of water, immersive, encompassing, edging deeper into places where your feet leave the ground and you’re buoyed along on eddying currents of words."—Tyee