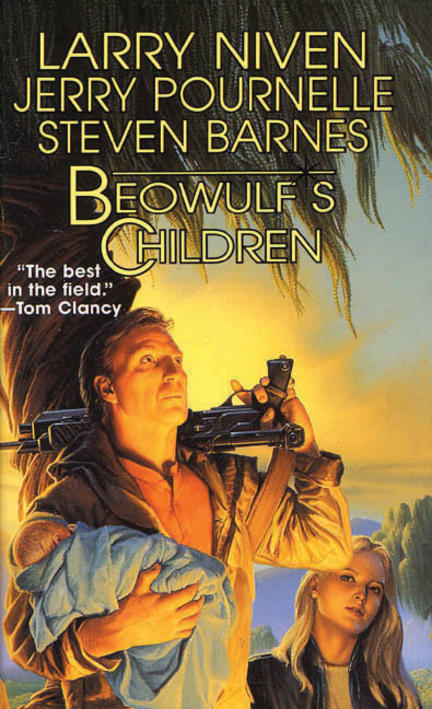 A new generation is growing up on the island paradise of Camelot, ignorant of the Great Grendel Wars fought when their parents and grandparents first arrived on Earth. Setting out for the mainland, this group of young rebels feels ready to fight any grendels that get in their way. On Avalon, however, there are monsters which drawf the ones their parents fought, and as the group will soon learn, monsters also dwell in the human heart.

Born in Los Angeles in 1952,Steven Barnes began writing at the age of five, and since that time has published over two million words. His first published collaboration, "The Locusts," was nominated for the 1980 Hugo award, and his Outer Limits episode "A Stitch In Time" was nominated for a Cable Ace Award and won an Emmy for Amanda Plummer. He also wrote a one-woman show based on the life of Bessie Coleman (the first Black Aviatrix), been the Kung-Fu columnist forBlack Belt Magazine (he holds dan rankings in Judo and Karate), and served as the host of the world's longest-running science fiction radio show,Hour 25. Currently living in Washington State with his wife, Novelist Tananarive Due and his daughter Lauren Nicole, Steven is working on a series of novels set in prehistoric Africa, for which he recently spent two weeks on Tanzania's Serengeti plain.

Larry Nivenis the multiple Hugo and Nebula Award-winning author of the Ringworld series, along with many other science fiction masterpieces. His Beowulf's Children, co-authored with Jeery Pournelle and Steven Barnes was a New York Times bestseller. He lives in Chatsworth, California.

Jerry Pournelle (1933-2017) was an essayist, journalist, and science fiction author. He had advanced degrees in psychology, statistics, engineering, and political science. As a science fiction author, he is best known for his many collaborations with Larry Niven, includingInferno, Beowulf's Children andThe Mote in God's Eye.

Pournelle was the first ever winner of the John W. Campbell Award for Best new Writer in 1973.

“The best in the field.” —Tom Clancy

“Don't miss this one.” —Starlog

“The team of Jerry Pournelle and Larry Niven is one the best in science fiction....InThe Legacy of Heorot they are joined by Steven Barnes for a tale of space conquest that makesAliens look like a Disney nature film....” —The Washington Times

Other titles by Larry Niven

Other titles by Steven Barnes