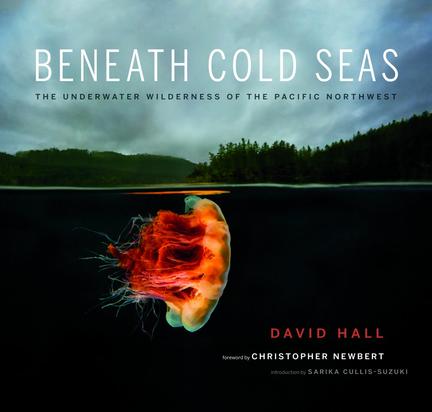 This book is a work of art from every possible angle—from the exquisite photographs, to the book's design, to its flawless printing and production process. There's no other way to describe it: David Hall has created a masterpiece. . . . A complete and moving immersion in the breathtaking underwater world of the Pacific Northwest. —National Outdoor Book Awards

The Pacific Coast of North America features the most diverse and visually spectacular marine life of any temperate or cold-water ecosystem on the planet. From tiny, candy-striped shrimp to the giant Pacific octopus, from alabaster nudibranchs, luminous moon jellyfish, orchid sea stars, and wolf-eels to Steller sea lions, white-sided dolphins, and so much more, David Hall's stunning underwater photographs—themselves works of art—reveal both the symbiotic and the predatory relationships in this web of life. Through state-of-the-art camera equipment and lighting, he has captured our underwater world in a way that will surprise even scuba divers already familiar with it and amaze the rest of us.

An introduction by Sarika Cullis-Suzuki, who has lived on the West Coast of North America almost her entire life and has studied its marine life as well as the fisheries of the high seas, describes her personal experiences with this amazing part of the world and discusses the conservation issues facing this rich yet vulnerable ecosystem. Christopher Newbert, author of the bestselling photography book Within a Rainbowed Sea, provides the foreword.

Beneath Cold Seas will appeal to a wide audience, including divers and beachcombers; fishers; marine life enthusiasts and scientists; tourists, including cruise ship and ferry passengers; and anyone who appreciates beautiful photography. Although there are many excellent underwater photography books on tropical locations, this is the first to feature the marine life of the Pacific Northwest and one of the few that focuses on any cold-water location.

David Hall is an award-winning photographer and photojournalist whose work has been published in National Geographic, Smithsonian, Natural History, Sierra, Time, Science, Scientific American, and other magazines. He is also the author of ten children's books in Scholastic's Undersea Encounters series. He lives in Woodstock, New York.

Christopher Newbert is the author of the best-selling photography book Within a Rainbowed Sea.

In Beneath Cold Seas, Hall reveals a vibrant and multi-coloured world of marine life off our Pacific Coast, which is also home to the most diverse marine life of any cold-water ecosystem on the planet . . . this book is a must for exposing the mysterious and beautiful fragile life in our local waters. —Janice Williams, Tri-City News

Beneath Cold Seas: The Underwater Wilderness of the Pacific Northwest is a coffee-table book of spectacular underwater photography by David Hall, a writer and photographer who is also an accomplished diver. The jellyfish, tubeworms, nudibranch and anemones are otherworldly in their beauty and a reminder that the Northwest has some great dive spots. —Oregon Live

You won't find SpongeBob SquarePants here, but you will find great photos of critters and phenomena from the deepest deeps of the Pacific Northwest. There isn't much light down there, and that makes these photos (and the colours!) of kelp forests and 'scalyhead sculpin' that much more remarkable. —Globe & Mail

Beneath Cold Seas: The Underwater Wilderness of the Pacific Northwest, by David Hall, transports readers to frigid waters off the west coast of Canada. The diversity of creatures in this ecosystem is astonishing; Hallís colour photographs of them are astonishing, too. Steller sea lions loom out of the darkness. A Pacific prawn crawls over a barnacle-encrusted ledge. Crimson anemones and red soft coral brighten the kelp forest on the sea bottom. —Montreal Gazette

An award-winning photographer, Hall reveals both the symbiotic and the predatory relationships in this web of life with both macro and panoramic shots. —Vancouver Sun

Dispelling the myth that cold, murky waters equal boring waters, Hall has captured the staggering beauty and variety of marine life found in the Pacific Northwest. Although the animals themselves are truly amazing, it is Hall's creative eye and masterful photographic technique that really sets this book apart. —Jemima Greaves, Outdoor Photography Magazine

The level of consistency and standard of imagery is quite exceptional and it captures the wild spirit of this corner of the planet, page after page…Beneath Cold Seas has taken over 15 years to achieve but the hard work has been worthwhile and it is difficult to imagine that there will ever be a better collection of photographs to come out of this area. —Peter Rowlands, Underwater Photography Magazine

Like no other photographer I am aware of, Hall has consistently managed to capture patterns, textures and colors and used all of these skillfully in compositions in such a tight and controlled manner, as if they were created on an easel . . . Not only is the book just a pleasure to go through, but the images are also an inspiration and a challenge for all other underwater photographers to go out and do better . . . David Hall is an inspirational master who clearly hasn't yet gotten all of the recognition that he deserves. —Peter Symes, X-Ray Magazine

. . . his gorgeous images of the weird, wild and watery should help spark public interest in a zone we need to know better. —Georgia Straight

This book is a work of art from every possible angle — from the exquisite photographs, to the book’s design, to its flawless printing and production process. There’s no other way to describe it: David Hall has created a masterpiece. . . . A complete and moving immersion in the breathtaking underwater world of the Pacific Northwest. —National Outdoor Book Awards

David Hall's award-winning photography captures the magnificent marine life of the West Coast: the most diverse of any cold-water ecosystem on the planet. Through state-of-the-art camera equipment and adventurous shots, he depicts our underwater world in a way that will amaze scuba divers and art-lovers alike. —Vancouver Sun

Other titles by David Hall