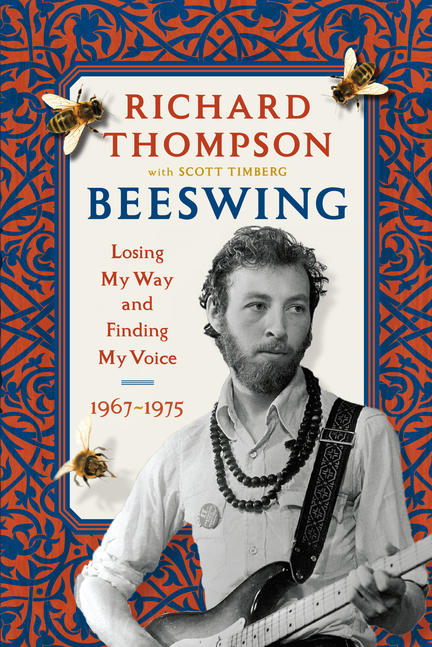 “Thompson is a master showman . . .  [Beeswing is] everything you’d hope a Richard Thompson autobiography would be . . . It’s both major and minor, dirge and ditty, light on its feet but packing a punch.”
—The Wall Street Journal
An intimate look at the early years of one of the world’s most significant and influential guitarists and songwriters.

In this moving and immersive memoir, Richard Thompson, internationally beloved music legend, recreates the spirit of the 1960s, where he found, and then lost, and then found his way again.

Known for his brilliant songwriting, his extraordinary guitar playing, and his haunting voice, Thompson is considered one of the top twenty guitarists of all time, in the songwriting pantheon alongside Bob Dylan, Paul Simon, and Randy Newman. Now, in his long-awaited memoir, the British folk musician takes us back to the late 1960s, a period of great change and creativity—both for him and for the world at large.

Thompson packed more than a lifetime of experiences into his late teens and twenties. During the pivotal years of 1967 to 1975, just as he was discovering his passion for music, he formed the band Fairport Convention with some schoolmates and helped establish the genre of British folk rock. That led to a heady period of songwriting and massive tours, where Thompson was on the road both in the UK and the US, and where he crossed paths with the likes of Led Zeppelin, Pink Floyd, and Jimi Hendrix. But those eight years were also marked by change, upheaval, and tragedy. Then, at the height of the band’s popularity, Thompson left to form a duo act with his wife Linda. And as he writes revealingly here, his discovery and ultimate embrace of Sufism dramatically reshaped his approach to music—and of course everything else.

An honest, moving, and compelling memoir, Beeswing vividly captures the life of a remarkable artist during a period of creative intensity in a world on the cusp of change.

Richard Thompson's widely beloved early work within the band Fairport Convention revived British folk traditions, and his duet albums and performances with Linda Thompson are legendary. His songs have been covered by Elvis Costello, David Byrne, Bonnie Raitt, Emmylou Harris, and R.E.M., among others. He continues to write and perform, and to tour widely. He lives in New Jersey.

“Beeswing is wry, un-ponderous, anti-obligatory. Because the sound Thompson created with Fairport was rooted in centuries-old songs, he isn’t captive to ’60s clichés; and because British electric folk is off the classic-rock grid . . . The book’s period accent makes it feel fresh and exploratory.”
—The New York Times Book Review

“Mr. Thompson is a master showman. The balancing act of major and minor, strung together by his witty, self-deprecating banter, is the crux of Mr. Thompson’s shows, and that same equipoise between dirge and ditty is the hallmark of Beeswing: It’s everything you’d hope a Richard Thompson autobiography would be . . . It’s both major and minor, dirge and ditty, light on its feet but packing a punch: like the very best Richard Thompson show.”
—Wesley Stace?, The Wall Street Journal

“Richard Thompson is one of the world’s great guitarists and songwriters and, with Beeswing, Richard adds master memoirist to his long list of artistic accomplishments. Beeswing is a fascinating look at his formative years in the vibrant, vital London music scene of the 1960s.”
—Bob Mould, musician and songwriter

“I admire Richard Thompson so much, and I found Beeswing as inspiring as his music. I devoured and savored it.”
—Steve Gunn, musician and songwriter

“[Thompson] is never less than razor-sharp, and credit is due for including both the highs and lows . . .  [His] spell is never broken, and, as on disc, his is a welcome voice to meet on the page. Readers will be eager for the next volume of the story. Like a great Richard Thompson solo, this title contains surprise, beauty, delight, and a voice like no other. His autobiography is as welcome as it is long overdue.”
—Library Journal, starred review

“Thompson has a reputation as a guitarists’ guitarist and a top-notch singer-songwriter . . . With Beeswing, Thompson proves himself equally adept as a memoirist . . . Just as he has a knack for lyrics, Thompson has a way with words on the page, offering colorful portraits of his contemporaries and collaborators . . . Thompson’s humor and insight also shine. He evocatively recreates a time and place, and, like his shows, his memoir leaves you wanting more.”
—Booklist, starred review

“[Thompson] offers plenty of insight into the early days of Fairport Convention and its ever-changing lineup along with charming anecdotes.”
—Kirkus Reviews

“Readers who regard Thompson as a major figure in the arts will consider this a must-read.”
—Publishers Weekly

“With pure alchemy, Richard Thompson created his own iconic guitar style, electrifying and reimagining Celtic music and going on to write some of the most passionate, intelligent and heartbreaking songs I know.”
—Bonnie Raitt

“Thompson is extraordinarily special: a singer-songwriter of rare bite and insight; an emphatic moderniser of ancient traditions; a guitarist with few equals.”
—Mojo

“Intimate, honest . . . For Fairport Convention fans, this book offers a teasure trove of information.”
—The Wire

Other titles by Richard Thompson

Fishes in the Ocean

There is Music in a Pussycat