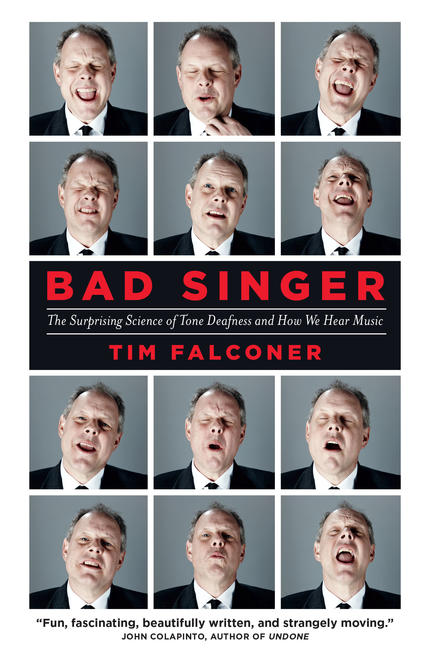 In the tradition of Daniel Levitin’s This Is Your Brain on Music and Oliver Sacks’ Musicophilia, Bad Singer follows the delightful journey of Tim Falconer as he tries to overcome tone deafness — and along the way discovers what we’re really hearing when we listen to music.

Tim Falconer, a self-confessed “bad singer,” always wanted to make music, but soon after he starts singing lessons, he discovers that he’s part of only 2.5 percent of the population afflicted with amusia — in other words, he is scientifically tone-deaf.

Bad Singer chronicles his quest to understand human evolution and music, the brain science behind tone-deafness, his search for ways to retrain the adult brain, and his investigation into what we really hear when we listen to music. In an effort to learn more about his brain disorder, he goes to a series of labs where the scientists who test him are as fascinated with him as he is with them. He also sets out to understand why we love music and deconstructs what we really hear when we listen to it. And he unlocks the secret that helps explain why music has such emotional power over us.

TIM FALCONER is the author of Bad Singer: The Surprising Science of Tone Deafness and How We Hear Music, which the Globe and Mail named to The Globe 100 Best Books of 2016. He’s also written books on activism, our love-hate relationship with the car, end-of-life ethics, and parenting. Falconer teaches creative nonfiction at the University of King’s College in Halifax, is a faculty editor in the literary journalism program at the Banff Centre for Arts and Creativity, and taught magazine journalism at Toronto’s Ryerson University for two decades. A former writer-in-residence at Berton House in Dawson City, he returns to the Yukon as often as he can, but lives in Toronto.

Other titles by Tim Falconer

Bad to the Bone