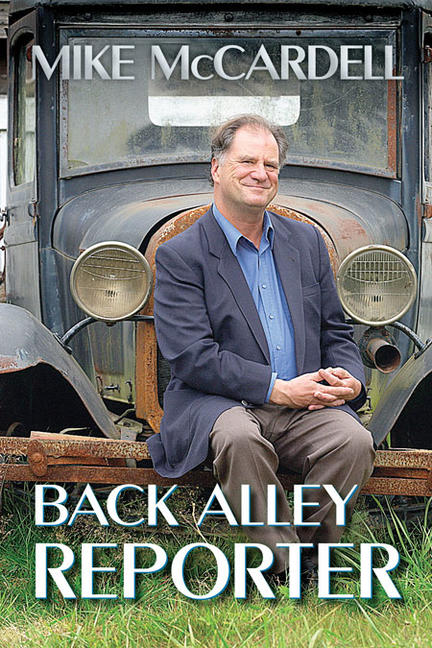 Back Alley Reporter, McCardell's follow-up to his bestselling memoir Chasing the Story God, is a charming collection of anecdotes, full of "un-put-downable" fun for anybody who enjoys a well-turned yarn.

Mike McCardell is known to thousands in British Columbia as the friendly, somewhat tousled gent who appears most evenings at the close of BCTV News on Global. His tongue in-cheek investigations of such weighty matters as a shoe abandoned in a downtown intersection have made him one of the most recognizable faces on West Coast television.

Back Alley Reporter includes more than sixty delightful and lighthearted stories guaranteed to put a smile on every reader's face. Wherever he goes and no matter what he's doing, McCardell finds magic in the ordinary--whether he's trying to save his garden by hunting for leaf-eating beetles in his own backyard, contemplating the creation of a new holiday ("Garbage Day") or musing on the lost art of washing dishes.

So take a tour down the back alley with McCardell and meet a number of intriguing characters along the way: Tom, a genius who became a professional beggar; Abe, an old-time bookie who only took bets on the neighbourhood stickball or school track teams; and Lorenzo, who has never broken a New Year's resolution.

Mike McCardell has earned the loyalty of hundreds of thousands of fans for his investigative reporting and human-interest stories. He is the author of the bestselling essay collections Unlikely Love Stories, Here’s Mike, Chasing the Story God, Back Alley Reporter, Getting to the Bubble, The Expanded Reilly Method, The Blue Flames that Keep Us Warm, Everything Works and None of This Was Planned, as well as the local history book Haunting Vancouver and the memoir Cardboard Ocean. You can also catch his stories on “The Last Word,” which airs at the end of CTV News at Six on weeknights.

Other titles by Mike McCardell

Ghostly Tales from the Past

And Other Thoughtful Scribbles

None of This Was Planned

The Stories Behind the Stories

Getting to the Bubble

Finding Magic Amid the Urban Roar