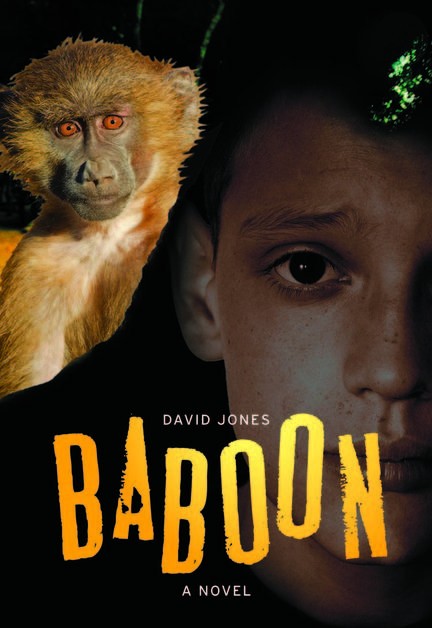 Fourteen-year-old Gerry Copeland has mixed feelings about flying back to his parents’ research camp in the African savanna. While his biologist mom and dad study baboon behavior, he’ll be thinking about the video arcade and restaurants back in the city.

Suddenly, their small plane’s engine stutters and dies. They go down hard. Gerry wakes up thinking a baboon has broken his fall. He’s shocked to realize the furry arm is his own. Somehow, he’s become one of the beasts his parents are studying. Gerry’s only chance is to stay with the baboon troop. His parents don’t recognize him and he begins to lose hope he’ll ever be human again. His final, desperate bid to turn back means giving up the animal family he’s come to care about for the human family where he truly belongs.

BABOON is the riveting story of one teenager’s journey into the heart of the baboon world, where he confronts terrifying attacks by predators and humans, threatening behavior within the troop, and the day-to-day struggle to survive.

David Jones is a full-time freelance writer with a degree in zoology. He has written widely on natural history themes and has published one previous book for young readers. He lives in Vancouver, B.C.

“Wild adventure gets a new twist ... the thrilling facts of animal behavior will stay with readers.”

Gerry Copeland regains consciousness amongst the debris of a plane crash only to witness his own mysterious transformation. He quickly discovers that, though his 14-year-old mind remains intact, he is no longer human. Gerry is a baboon.

Baboon depicts a young boy’s struggle to survive as a baboon amid the harsh African savanna. The veldt comes to life as David Jones describes Gerry’s voyage to locate and unite with the troop. Gerry fears that the troop will blatantly refuse him until he realizes that he is one of their very own.

This gripping adventure is overflowing with factual information that aids the reader in visualizing the world of this primate. Gerry’s newfound body, sense of smell and awareness of temperature heighten the reality of living as a baboon. In the face of survival, Gerry encounters situations where he must make morally driven decisions. He must learn how to forage for food, how to become a top ranking male and how to protect himself from the veldt’s many lethal predators. Jones’s ingenious pebble calendar acts as a representation of time demonstrating Gerry’s change in mind set. Each pebble marks the gradual evolution of Gerry’s human mind into that of a baboon, free of human emotion. Before long, Gerry recognizes that he can no longer count, that he has made a weapon and that he has the ability to kill. Gerry becomes so absorbed in the ways of the baboons that he starts to teeter on the edge of forgetting his human memory.

It is during an ambulance ride that Gerry wakes to his mother’s smiling face. Jones’s ambiguity as to whether or not Gerry was a baboon establishes another layer of intrigue to the story. He leaves it to the reader’s own imagination to accept or dismiss Gerry’s experience. Jones weaves a tale that captures the reader and leaves them to wonder if Gerry will ever be human again.

After his plane crashes on the African Savanna, Gerry is transformed into a baboon. Can he survive with the troop long enough to turn back into a human?

Other titles by David Jones

Posters of the Canadian Pacific