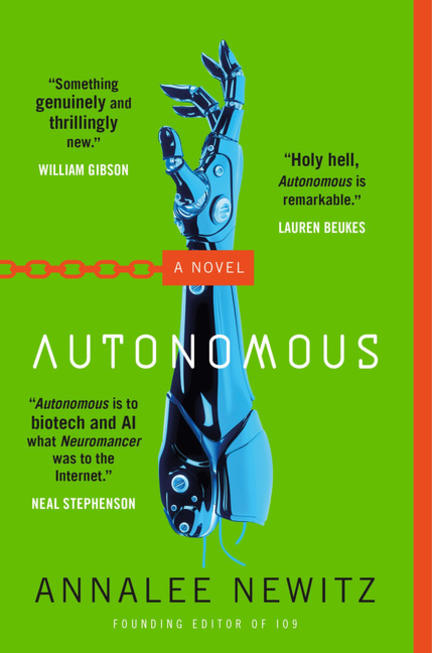 Autonomous is the highly anticipated debut from science journalist and founder of the science and sci-fi blog io9 Annalee Newitz, a novel that explores humanity's technology and culture in a future where everything--and everyone--is a product.

Earth, 2144. Jack is an anti-patent scientist turned drug pirate, traversing the world in a submarine as a pharmaceutical Robin Hood, fabricating cheap scrips for poor people who can’t otherwise afford them. But her latest drug hack has left a trail of lethal overdoses as people become addicted to their work, doing repetitive tasks until they become unsafe or insane.

Hot on her trail, an unlikely pair: Eliasz, a brooding military agent, and his robotic partner, Paladin. As they race to stop information about the sinister origins of Jack’s drug from getting out, they begin to form an uncommonly close bond that neither of them fully understand.

And underlying it all is one fundamental question: Is freedom possible in a culture where everything, even people, can be owned?

"Autonomous is to biotech and AI whatNeuromancerwas to the Internet."—Neal Stephenson

"Something genuinely and thrillingly new in the naturalistic, subjective, paradoxically humanistic but non-anthropomorphic depiction of bot-POV—and all in the service of vivid, solid storytelling."—William Gibson

ANNALEE NEWITZ is an American journalist, editor, and author of fiction and nonfiction. She is the recipient of a Knight Science Journalism Fellowship from MIT, and has written forPopular Science,The New Yorker, and theWashington Post. She founded the science fiction websiteio9and served as Editor-in-Chief from 2008–2015, and subsequently was Editor-in-Chief atGizmodoand Tech Culture Editor at Ars Technica. Her bookScatter, Adapt, and Remember: How Humans Will Survive a Mass Extinction was nominated for the LA Times Book Prize in science. Her first novel,Autonomous, won a Lambda award, and her new novelThe Future of Another Timeline is out Sept. 2019.

"Autonomous is to biotech and AI whatNeuromancerwas to the Internet."—Neal Stephenson

"Something genuinely and thrillingly new in the naturalistic, subjective, paradoxically humanistic but non-anthropomorphic depiction of bot-POV—and all in the service of vivid, solid storytelling."—William Gibson

"This book is a cyborg. Partly, it's a novel of ideas, about property, the very concept of it, and how our laws and systems about property shape class structure and society, as well as notions of identity, the self, bodies, autonomy at the most fundamental levels, all woven seamlessly into a dense mesh of impressive complexity. Don't let that fool you though. Because wrapped around that is the most badass exoskeleton--a thrilling and sexy story about pirates and their adventures. Newitz has fused these two layers together at the micro- and macro-levels with insight and wit and verbal flair. Moves fast, with frightening intelligence." —Charles Yu, author ofHow to Live Safely in a Science Fictional Universe

"Everything you'd hope for from the co-founder of io9 ... Combines the gonzo, corporatized future of Neal Stephenson'sSnow Crash with the weird sex of Charlie Stross'sSaturn's Children; throws in an action hero that's a biohacker version of Bruce Sterling's Leggy Starlitz, and then saturates it with decades of deep involvement with free software hackers, pop culture, and the leading edge of human sexuality." —Cory Doctorow,New York Times bestselling author ofWalkaway.

"Fascinating.... [Newitz is] an excellent writer, with an effortless style.... The inner science geek in all of us will uncover some really cool stuff.... A terrific book that covers an astounding amount of ground in a manageable 300 pages... You will be smarter for it."
—San Francisco Chronicle

"An enormous amount of knowledge is gathered here, and the book accomplishes something almost impossible, being extremely interesting on every single page. A real pleasure to read and think about." —Kim Stanley Robinson, author of the Mars trilogy

"A refreshingly optimistic and well thought out dissection of that perennial worry: the coming apocalypse. While everyone else stridently shouts about the end of days, this book asks and answers a simple question: ‘If it’s so bad, then why are we still alive?’... Newitz inspires us with engaging arguments that our race will keep reaching the end of the world and then keep living through it.Scatter, Adapt, and Rememberintimately acquaints the reader with our two-hundred-thousand-year tradition of survival—nothing less than our shared heritage as human beings."—Daniel H. Wilson, author ofRobopocalypse andAmped

Other titles by Annalee Newitz

The Future of Another Timeline