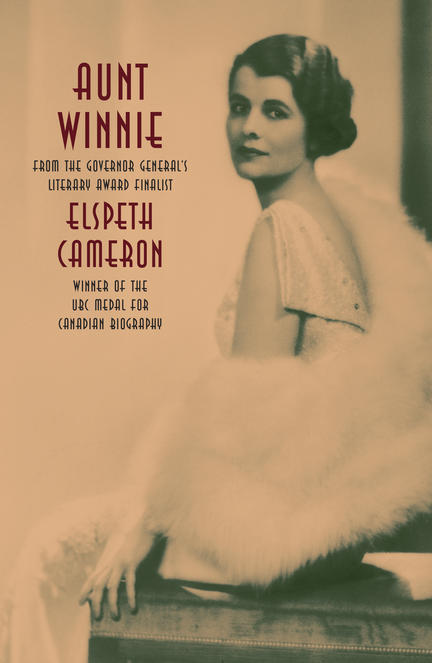 Governor General’s Literary Award-nominated biographer Elspeth Cameron turns her eye on a member of her own family in this fascinating study of an Edwardian woman. Winnie Cameron, Elspeth’s aunt, was born in Seattle, raised briefly in Dawson City, and then moved to Toronto to live in Rosedale with her family in the 1910s. Enjoying status as a member of Toronto’s ruling Anglophile elite, she became a perpetual debutante – a lifestyle that left her bankrupt, unable to cope with the demands of her changing times.

Aunt Winnie is not just a study of one socialite’s rise and fall. Over the course of her life, Winnie saw the city change from one dominated by the English and Scottish immigrants, horse-drawn buggies, to a multicultural city where the car reigned supreme. Her life is embedded in a greater story about Toronto of the early 20th century.

Elspeth Cameron is the author of three award-winning biographies: Hugh MacLennan: A Writer's Life (1981), Irving Layton: A Portrait (1985), and Earle Birney: A Life (1994). Her 1997 memoir No Previous Experience won the W.O. Mitchell Literary Prize. She was the recipient of the UBC Medal for Canadian Biography in 1981 and the City of Vancouver Book Award in 1995. Her biography of Hugh MacLennan was a finalist for the Governor General's Literary Award. She has written numerous profiles of Canadian cultural figures such as Peter Newman, Jack McClelland, Veronica Tennant, Anne Murray, Howard Engel, Janette Turner Hospital, and Timothy Findley, winning several journalism awards. Her work has appeared in Saturday Night, Chatelaine, Maclean's, Leisureways, and in a number of academic journals. In addition, she has edited seven books, including Great Dames, a collection of biographical sketches, memoirs, and essays about twentieth-century Canadian women from all walks of life. She has taught English and Canadian Studies at Concordia University and the University of Toronto, and is currently an adjunct professor in the English Language and Literature Department at Brock University. Elspeth now lives in St. Catharines, Ontario, and is at work on a biography of Group of Seven member, A.Y. Jackson.

Other titles by Elspeth Cameron

A Tale of Two Divas

The Life of Frances Loring and Florence Wyle

Multiculturalism and Immigration in Canada