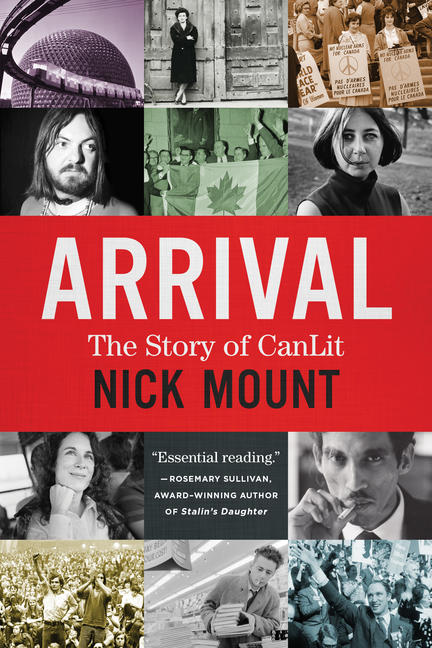 “The most important book to be written in more than 40 years about the rise of Canadian literature… Arrival: The Story of CanLit brims and crackles, in equal measure, with information and energy.” — Winnipeg Free Press

In the mid-twentieth century, Canadian literature transformed from a largely ignored trickle of books into an enormous cultural phenomenon that produced Margaret Atwood, Alice Munro, Michael Ondaatje, Mordecai Richler, and so many others. In Arrival, acclaimed writer and critic Nick Mount answers the question: What caused the CanLit Boom?

Written with wit and panache, Arrival tells the story of Canada’s literary awakening. Interwoven with Mount’s vivid tale are enlightening mini-biographies of the people who made it happen, from superstars Leonard Cohen and Marie-Claire Blais to lesser-known lights like the troubled and impassioned Harold Sonny Ladoo. The full range of Canada’s literary boom is here: the underground exploits of the blew ointment and Tish gangs; revolutionary critical forays by highbrow academics; the blunt-force trauma of our plain-spoken backwoods poetry; and the urgent political writing that erupted from the turmoil in Quebec.

Originally published to coincide with the 150th anniversary of Canadian Confederation, Arrival is a dazzling, variegated, and inspired piece of writing that helps explain how we got from there to here.

NICK MOUNT is a professor of English literature at the University of Toronto, award-winning critic, and former Fiction Editor at The Walrus. He regularly gives public talks on the arts in Canada, and has appeared on TVO’s Big Ideas and CBC Radio’s Sunday Edition. He is a two-time finalist in TVO’s Best Lecturer Competition. In 2011, he was awarded a 3M National Teaching Fellowship, the country’s highest teaching award. He lives in Toronto.

Excerpt: Arrival: The Story of CanLit (by (author) Nick Mount)

He had a small cross tattooed on his chest and a significant scar on his throat. He told different stories about how he got them. In one version, the tattoo was a grateful reminder of his education in a Canadian church mission school and the scar the remains of a childhood surgery. At another time, for another audience, he might say he picked up the tattoo while drunk on shore leave, the scar in a knife fight.

Harold Sonny Ladoo emigrated from Trinidad to Canada in 1968, an early arrival in a wave of immigration made possible by a new point system that made Canada more open than ever before to immigration from non-European countries. Like most such immigrants, he came to Toronto. He came in his early twenties, already married, with children. And he came determined. You might doubt his stories, but no one who met Harold — never Harry — ever doubted he would tell them.

Two years and a lot of dishwashing later, he met the new writer-in-residence of the new Erindale College at the new Islington subway station. As Peter Such tells it, he noticed a young man in a cheap coat several sizes too large for him, a man “staring straight ahead, looking at somewhere else completely.” Whatever he saw out there, he wrote it down on the back of a TTC transfer. On a hunch, Such asked the young man if he was a writer; he said, yes, I am. Such invited him to see Erindale, and with the help of an equally impressed registrar, Harold Ladoo found himself enrolled as a mature student at the new Mississauga campus of the University of Toronto.

The calendar said 1970 but it was still the sixties, and the talk in his corner of the student cafeteria was of Marx and Fanon, Lenin and Mao, Che Guevara and Angela Davis. Ladoo joined the battle as if he had been waiting for it his whole life (because he had), arguing about anything and everything, vigorously, intensely, to win. The other students called him Plato, partly out of respect, partly to mock him. He liked it. He was of them but apart from them, disdainful even, caring more for the words he was forever writing than the words and worries of others. A writer.

At first, of course, his words were borrowed. He wrote carefully measured poems, finger exercises from the Empire’s song book. Peter Such told him about a Toronto publisher named after an African god; he sent the poems to them. Their editor rejected them and told Ladoo to write about what he knew. Ladoo wrote a spiteful letter back, but he also burned everything he had written to that point, two suitcases full of manuscripts. And a week later he showed up in Such’s office with a half-dozen stories about the village near which he had grown up. By the end of his first year at Erindale, he had the draft of a novel. He submitted it to the editor who had rejected his poems; they met at the Red Lion pub on Jarvis, the manuscript on the table between them. Again the editor said no, not yet.

That summer, Ladoo learned on the day of his father’s death — August 12, 1971 — that the people of Canada wanted to give him money to write a book. He used $300 of his $500 grant from the Canada Council for the Arts to return to Trinidad, where he found his mother drunk, his brother a confirmed lunatic, and his sisters and neighbours fighting over the property. When he came back to Toronto in September, he had no money, his wife was unemployed, his son was sick, and they were about to be evicted. A relative let the family move into the basement of her bungalow on Victoria Park Avenue. Ladoo borrowed enough money to go back to school for his second year, making the long commute from the edge of Scarborough to the middle of Mississauga. And he wrote the book he was being paid to write, the book he had learned to write, the book he was born to write:

In my long hours of aloneness, in my frustration and sorrow, in my sleeplessness and the painful awareness of impotence and doom, even during the illness of my wife and my son, I took to my typewriter to write a book… . For fifty days I heard only the groaning of my son as the keys of the typewriter went still. But I could not stop.

This time the editor said yes. In the fall of 1972, Harold Sonny Ladoo from Trinidad became a published Canadian author. His first novel, No Pain Like This Body, edited by Dennis Lee, was published by House of Anansi Press in Toronto for $8.50 cloth, $2.95 paper. On the back, a photograph by Graeme Gibson shows Ladoo smoking, staring straight ahead.

Harold Ladoo was part and product of a literary explosion unlike anything Canada has ever experienced, before or since. The long decade between the late 1950s and the mid-1970s saw the emergence of the best-known names in Canadian literature, writers to whom time (never mind subsequent events) has so far been kinder than it has to Ladoo. These are the names most people still think of when they think of Canadian writing, names like Margaret Atwood, Marie-Claire Blais, George Bowering, Leonard Cohen, Mavis Gallant, Margaret Laurence, Dennis Lee, Alistair MacLeod, Alice Munro, bpNichol, Michael Ondaatje, Al Purdy, Mordecai Richler, and Michel Tremblay.

It wasn’t just literary. Canada awoke in the 1960s, shaken by the excitement leading up to the party in Montreal. But the explosion was loudest and echoed longest in print. By the 1950s, Canadian art had a “distinct canon of images”: the lonely pine, the snow-covered village church, the canoe, the mountain. No such set of literary images existed in the national psyche until after the sixties — no double hooks, no stone angels, no beautiful beasts or beautiful losers. That’s partly the problem addressed by the Massey Report, the government’s 1951 enquiry into Canadian culture: the realization that, as a means of national expression, literature had “fallen far behind painting.”

This book tells the story of when all that changed. It’s a story about writers, publishers, and readers, people who in one way or another played leading roles. It’s also the story of the culture that created and sustained them, a society finally comfortable enough to think about something besides trees and wheat. Postwar prosperity created both an existential backlash — the nagging sense that this can’t be all there is — and the means to buy what was missing or the leisure to produce it. Few realized it at the time, but that’s what the hippies of Yorkville shared with their parents, and with the politicians in Ottawa: the desire to redirect affluence into immaterial rewards, the “intangibles” that the Massey Report said make up a nation. You can’t get much more intangible than barefoot in the park.

Other titles by Nick Mount

Connecting the dots between some of the season's most talked-about books.