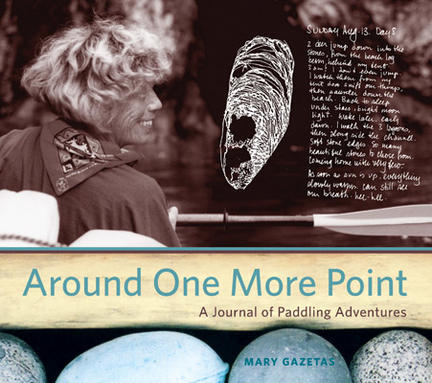 Around One More Point is a journal sketchbook of writings, photographs and drawings that capture the adventures of B.C. artist and paddler Mary Gazetas, who has journeyed with family and friends on the west coast of Vancouver Island, the Inside Passage and Haida Gwaii for almost 25 years.

This work, with its powerful visual imagery, includes stories and art created when Mary first started taking ocean canoe trips in the '80s with her twin sister and her children. Since those pre-Gore-Tex days of primitive beach camping and paddling in all kinds of weather, the trips, the people and the artwork have changed.

What hasn't changed, though, is her passion for the character of the coast, and she returns every summer, bringing home material to be transformed into a variety of artistic expressions. The journeys include paddle trips in Barkley, Clayoquot, Nootka and Kyuquot sounds, the Broughton Archipelago, the central coast and Haida Gwaii (the Queen Charlotte Islands). This evocative journal will take readers on a journey, inspiring some to go to these beautiful places themselves-to go around one more point.

Mary Gazetas was born in West Vancouver and grew up around water and small boats. She studied fine arts at UBC and later entered the design program at the National Theatre School in Montreal, graduating in 1968. She lived in Alberta for 11 years, where she was involved in theatre and film design and printmaking; she also worked as an instructor in visual arts and as a festival planner. She settled in Richmond in 1983. Gazetas is a mother, grandmother, tennis player and founding director of the Richmond Fruit Tree Project, which is involved in the operation of two community-based farming projects.

Around One More Point: A Journal of Paddling Adventures

This book is a visual account of artist Mary Gazetas’ twenty-five years of summer canoe and kayaking trips along the BC coast. Her paddling journals, full of photographs, drawings, diagrams and maps, have been collaged into this appealing “journal sketchbook”. Written as a personal account, this collection will inspire others to create artistic memories of trips. Gazetas creates “Beachscapes” with materials beachcombed on each adventure. The book is arranged geographically beginning on the West Coast of Vancouver Island with Barkley, Clayoquot, Nootka, Kyuquot and Quatsino Sounds, then to the Inside Coast with Desolation Sound and Broughton Archipelago and finally to Hakai and Haida Gwaii.