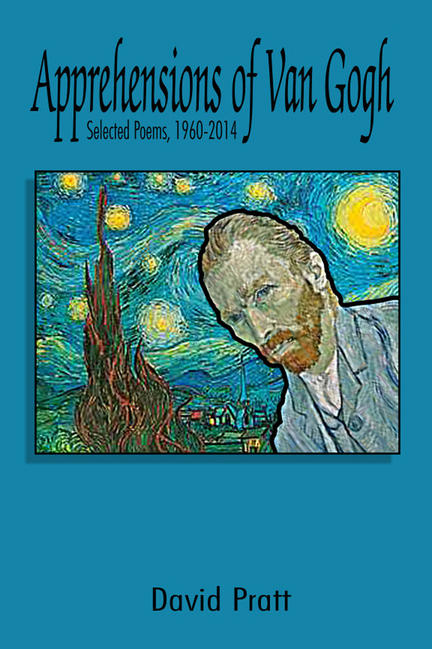 The settings for David Pratt’s poetry are as diverse as their content and form, including Canada, Cuba, the Czech Republic, Israel, France, Norway, Spain, and the isles of Greece. Certain themes recur: war is one of them, reflecting the poet’s childhood under German bombers in wartime England. Another theme is art and artists, celebrating the work of the Canadian Fred Varley, the Czech Jakub Schikaneder, the Norwegian Edvard Munch, and the Dutch van Gogh. Other poets and writers are memorialized: Irving Layton, Al Purdy, Isaac Babel, André Frénaud. Interspersed among these pieces are personal poems that record the heart's journey across the decades.

David Pratt, professor emeritus of education at Queen's University, has been collecting quotations for more than fifty years. He is the author of two major texts on curriculum plus numerous short stories and poems published in international literary journals and anthologies. Born in Britain, he now lives in Kingston, Ontario.

When Joseph Brodsky was on trial in Leningrad in 1963 on a charge of social parasitism, he argued that he was not a parasite but a poet. What educational qualifications do you have, the judge asked, to entitle you to call yourself a poet?  “I don’t think poetry comes from an education,” Brodsky answered. “I think it comes from God.” He was sentenced to five years hard labour.
Few poets today would claim so candidly to be touched by divine fire.  Nevertheless, there is an ineffable quality in poetry that, as in music, dance, painting, sculpture, and the other arts, distinguishes it from the prosaic. For one thing, poetry has an element of the physical, of eros, of earth, fire, and water. And the truest responses to poetry are physical: goose flesh, laughter, and tears. For me, the meeting place of form and substance is also the rendezvous of the mind and heart. A poem is not simply an intellectual exercise; I can write only of matters about which I care deeply. Alex Colville expressed this eloquently:

I once said that I painted people and animals which are wholly
good. I was really saying that the element of love, of deep
attachment, of ascribing unqualified significance to particular living
beings (which are in a sense inventions) and above all of feeling
that there is transcending importance in certain relationships of
elements—this element is central in the process of making art.

This collection contains most of the poems, written over five decades, that I would like to preserve. The poems come in three forms: formal poems, non-formal poems, and prose poems. In my experience, the form of the poem emerges naturally from the substance. I confess that I have never been much influenced by contemporary trends. Fashion has always seemed to me an emblem of superficiality, most of all in the arts.
The tradition I admire is lyrical and narrative, and runs back from such poets as Irving Layton and Dylan Thomas through Eliot and Frost, Housman and Tennyson, to Chaucer and Homer. In the twentieth century, this tradition bifurcated. One school became the academics of the avant-garde, the other the troubadours of popular songs.  The middle ground of popular poetry was left virtually unoccupied. Newspapers stopped printing poems and reviewing poetry books. Today most poetry is published in subsidized journals produced by university English departments. In the public eye, the cultural traction of poetry has come close to that of macramé. As the Polish poet Wislawa Szymborska observed, “Bureaucrats and bus passengers respond with a touch of incredulity and alarm when they find that they’re dealing with a poet.”
The second law of thermodynamics posits that everything must decay, die, and vanish into its environment. Those who still write poetry do so in defiance of this law. If any of the poems in this collection provoke incredulity or alarm, their creation will not have been in vain.
Apprehensions of Van Gogh
To Hell with It

After staring at the unforgiving page all day,
seeking in vain the incandescent phrase,
I said to hell with it and went out to the lake.
Beavers and winter storms had brought down trees
across the trails; I cut them where they lay,
then threw the logs into a disused mica mine
that needed filling in. Old cedar trunks
clad in green slime, submerged a century,
rested in the shallow water of the bay;
I winched them out and stacked them up to dry.
I got three hundred seedlings of white pine
and sweated with a pickaxe and a spade
to plant them in the stubborn rock and clay.
Woodpeckers drummed, blackflies besieged my eyes,
geese in formations migrated overhead,
loons called and dived, a heron flapped away:
that was my poetry for the month of May.

Aggressive, egotistical, and vain,
you scorn your rivals and deride your friends;
your poems redolent with love and pain,
contemptuous of literary trends.

The literati will not take your part;
your poetry unfashionably records
the motives of the genitals and heart.
It’s not the style to win the big awards.

Aging ungracefully and overweight,
disparaged by your smoother, younger peers,
you startle, dumbfound, and intoxicate
with every poem you pour into our ears.

And in the end it is your poetry, yours,
the people greet with tears and wild applause.

Fred Varley in His Studio

He stands at the easel in old age,
in his attic space,
cigarette stubs at his feet,
boots by the table, on it a jug of milk,
a slice of cheese folded in a hunk of bread
cut with a butcher knife,
books and drawings strewn around the place.

He has a genius for losing
clothes, jobs, homes, and women,
and for capturing the darkness
of the notch at the base
of a throat, a model cupping an apple
in her timeless palm
with meditative grace.

Out of his poverty he bequeaths us
the planes of a shoulder, a forehead, a trace
of green shadow around a seductive mouth.
The brown cord coat is flecked with paint,
the palette thumb-hole smooth with use,
but the blue eyes are still bright
and watchful in the creased and fractured face.

In summer in Algiers, amid the scents
of honeysuckle and horse dung,
old men with medals and missing limbs
sit on benches in the shade.
Shutters are closed against the dust,
and boys shout as they swim
in the harbour’s silky water and violent sun.

Such boys he teaches.
Coaxes, drills, lectures them,
beats them impartially,
nurtures their intelligence,
this obscure, devoted teacher
in this poor colonial town.

When, in midlife,
Albert Camus receives the Nobel Prize,
he writes to his old teacher: But for you…
And Louis Germain,
now long retired, writes back:
My dear child…

The name on the long list caught his eye;
then he remembered: he had seen her dance
once, in Berlin, at the Operahaus,
in 1931 or ‘32,
when he was nineteen, studying philosophy.
He recalled the elegance, the discipline,
the art that came from ignorance of compromise.
He took the megaphone from the Unteroffizier
and called her name. And then again.

From the line of naked beings
one stepped out. Unrecognizable.
Skeletal ribs and pelvis, shrunken
breasts and thighs, face furrowed, hair gray.
You are the dancer? Wide-eyed, she nodded.
“Dance,” he said. She stared uncomprehendingly.
Gripping his riding crop, he said again,
more softly, “Dance.”

She began to dance. Awkwardly.
Stumbling. And then as if remembering
the music, as if awakening,
dreaming, began to dance.
A vault, a grand jeté,
sweeping nearer to him,
tore his pistol from the holster,
fired once, killing him instantly.
A storm of bullets cut her down.
The doors opened, and the line began to move.

I load up with fresh salmon
and smoked oysters for this evening,
bacon and marmalade, optimistically,
checking my list, making tight turns
round the end of aisles,
and am brought up sharp behind drab clothes
untidy grey hair, cart blocking the aisle,
reading through thick glasses
the labels on cans. I say thank you curtly
when she notices and lets me by.

I pass cabbages and watermelons
stacked like heavy ordnance,
pick ears of corn, two avocados,
head for the checkout
and am behind her again
unloading sardines and day-old bread.

Fumbling with age-spotted hands in a plastic purse,
she counts out nickels, dimes,
searches for pennies (I exhale audibly),
holds out the coins in her palm
and I see, appalled:
the blue numbers tattooed on her wrist.

Wave after wave rolls into the horseshoe bay. The evening breeze stirs laundry on a rooftop, sifts through the orange trees, rattles the shutters of condos closed for winter. In waterfront cafés, sleek German tourists drink beer and watch the sunset. I follow boot prints in the darkening sand.

Wave after wave of Moroccan troops. The guns, and then the knives. Men of good will fell back, and fell. Just beyond the breakers, a fisherman rests his oars and pays out net. Shadows invade the village, colour migrates from earth to sky. Cafés switch on blue lights.

Wave after wave of civilians fleeing the wreck of Malaga. Ambulances try to forge a path. Mothers beg the drivers to take their babies. The sea is a dangerous green tonight. The setting sun begins to ignite the sky.

Wave after wave of bombers of the Condor Legion, blasting holes in the crowds of refugees. On the beach, a man stands behind a woman, his arms around her waist as they look out to sea. The ruined tower on the headland is now a silhouette.

Wave after wave of arrests and executions. There are no memorials. Behind the town a shrouded moon rises above the hills. The dying sun gashes a wound in the horizon. The fronds of palm trees whisper, and are still. The boot prints in the sand are filled with blood.

Other titles by David Pratt

The 1001 Wisest Things Ever Said by Nobel Prize Winners