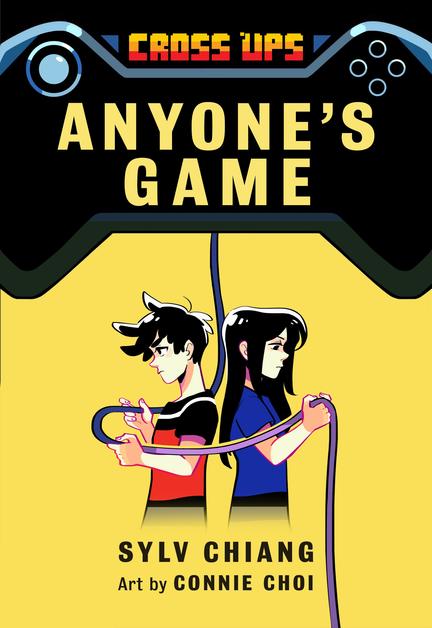 What’s up with Cali? Why does she keep changing her gamer tag?

It’s summertime, and even though his good friend Cali moved to another city, Jaden can connect with her online almost every day to play their favorite game, Cross Ups. His mom has loosened her rules on how often he can play, and he has an amazing new controller that will make him even better at tournaments. But then he gets roped into a dorky summer camp with his buddy Hugh, and Cali starts acting really weird . . . So when a last-minute tournament spot opens up in Cali’s city, Jaden jumps at the chance to go.

But things go badly from the start. Jaden loses his controller on the train, and his reunion with Cali is awkward. She’s unhappy, and Jaden can’t figure out why, especially when she’s getting better and better at Cross Ups—and may even win the tournament.

With its sharp dialogue and relatable characters, Anyone’s Game, the second book in the Cross Ups series, chronicles the ups and downs of middle school with a relevant, contemporary twist.

Sylv Chiang is a middle grade teacher by day and a writer of middle grade fiction by night. She wrote Cross Ups! to appeal to the students in her grade five class who are more interested in video games than books. She lives in Pickering, Ontario.

Connie Choi is a Toronto-based illustrator who recently graduated from the Illustration program at Sheridan College. She loves to draw characters and the worlds they live in. She lives in Toronto, Ontario.

Chapter 1
On screen, my dragon-cross, Kaigo, is locked in battle with Saki, the yeti-cross.
Kaigo breathes fire, but before he can melt the ice off Saki’s beard, Saki thrusts a snowstorm my way. The fire extinguishes, and Saki comes in for the punishment.
I’m playing my favorite game, Cross Ups IV. Kaigo’s my main. I play him so much it’s like he’s a part of me. Not the real me, of course. I’m just a skinny twelve-year-old who’s never been in a real fight. Kaigo’s the guy I am inside my head.
Kaigo wears kung fu gear and he’s totally buff. He’s super confident, probably because he can turn into a dragon and blow his opponents’ heads off with fireballs.
Most of the time.
Right now, he’s being shut down by Saki, who just unleashed a blizzard of punches. The yeti-cross is being played by my friend, Cali. It’s the second week of summer holidays and we’re playing online. Cali’s gotten good at Cross Ups since she moved to live with her dad in Montreal a few months ago. I mean, she was always good, but now she’s actually coming close to beating me. I’d better power up.
I go to throw my Dragon Fire Super but she’s faster. Her character transforms into a huge yeti and stomps across the screen. Ice flies everywhere. My Health Meter is down to a thin beat of red.
Not cool.
I jump in the air to breathe fire down her neck—a move she never blocks fast enough. But today she does. Before I compute what just happened, a yeti headbutt takes me down.
K.O.
She beat me?
That’s not supposed to happen.
HermIone Tuesday , 4:08 pm
YES! FINALLY! GTG
We’ve been playing for six hours, but I totally don’t want to stop. Not on a loss.
JStar Tuesday , 4:09 pm
1 MORE
HermIone Tuesday , 4:09 pm
CAN’T
JStar Tuesday , 4:09 pm
Y NOT?
HermIone Tuesday , 4:10 pm
TRBL TTYL
JStar Tuesday , 4:10 pm
WHAT KIND OF TRBL?
She logs off before I hit send.
It’s not like Cali to run off just because she finally got a win. Is her dad mad at her for playing so long? Or is it something more serious?
Sometimes Cali’s like the yeti. She freezes me out.

Other titles by Sylv Chiang

Other titles by Connie Choi