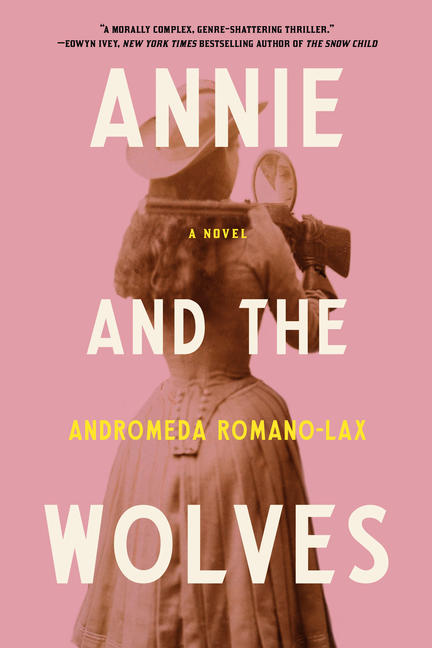 A modern-day historian finds her life intertwined with Annie Oakley's in an electrifying novel that explores female revenge and the allure of changing one's past.
Ruth McClintock is obsessed with Annie Oakley. For nearly a decade, she has been studying the legendary sharpshooter, convinced that a scarring childhood event was the impetus for her crusade to arm every woman in America. This search has cost Ruth her doctorate, a book deal, and her fiancé—but finally it has borne fruit. She has managed to hunt down what may be a journal of Oakley’s midlife struggles, including secret visits to a psychoanalyst and the desire for vengeance against the “Wolves,” or those who have wronged her.

With the help of Reece, a tech-savvy senior at the local high school, Ruth attempts to establish the journal’s provenance, but she’s begun to have jarring out-of-body episodes parallel to Annie’s own lived experiences. As she solves Annie’s mysteries, Ruth confronts her own truths, including the link between her teenage sister’s suicide and an impending tragedy in her Minnesota town that Ruth can still prevent.

Andromeda Romano-Lax is the author of The Spanish Bow, a New York Times Editors’ Choice that has been translated into 11 languages; The Detour; Behave; and Plum Rains, which won the Sunburst Award for Excellence in Canadian Literature of the Fantastic, as well as numerous works of nonfiction. She is a co-founder of 49 Writers, a statewide literary organization in Alaska, and lives on a small island in British Columbia.

Excerpt: Annie and the Wolves (by (author) Andromeda Romano-Lax)

She woke to the shriek of the whistle and the squeal of brakes.
Three in the morning, yet the sleeper car was flooded with sparking, shuddering light.
In that bright silver moment as the trains collided, she felt herself lifting from the bed, time slowing as it had always done at the bottom of a breath when she lined up a shot. She was floating, her gowned body surrounded by twinkling glass and feathers, every barb aglow. Then she slammed into the wall. A blast of pain raced across her pelvis and up her spine. Too much to bear.
Annie Oakley thought, Away.
And then she was.


Annie was on her back, laid out on a piece of canvas within sight of the toppled train car, a wool blanket over the bottom half of her body. For the moment, no one attending to her.
Turning her head, she could see other passengers from the demolished show train being escorted, limping and stunned, toward an upright stock car that had been turned into a makeshift hospital, its large panel doors open and dozens of people crowded inside. Other wood-sided cars had been reduced to splinters, their contents thrown into the swampy North Carolina lowlands alongside the tracks. Outside were cowboys, Indians, train crew, all trying to help. A bison from the show stood in a ditch, unharmed, its massive beautiful head turned toward her, backlit by the yellow dawn.
The sun was rising. Hours had passed. But it had not felt like time passing. She had skipped from the moment of the crash until now, like a stone across a pond.
She rolled to one side and cried out in pain, attracting the attention of a man in a gray cap who was pointing a rifle at the head of a downed horse. The man hesitated and looked Annie’s way while she stared past him, wanting to help the creature, but it was useless. Moving even a few inches had brought her to the edge of a blackout.
The horse was on its side on the ground, ribs moving with uneven, quivering breaths. The man settled his shoulders and aimed the rifle again.
Pearly smoke, that burning acrid smell, and her thought—No!—but she knew it must be done, and done well. Eyes closed, she listened and counted. Three shots. A pause. Four more. She felt her anger rise. The placement must be exact for it to be merciful. It shouldn’t take so many shots.
She opened her eyes and saw the man step a little way down the tracks toward a second, equally lame horse. It was one of her favorites: a dark chestnut with a white blaze down its face. This time, it was as if the rifle were being placed on her own forehead, the steel muzzle set between her own eyes. Skipping forward had been no reprieve; it had only brought her to the next terrible place. She closed her eyes, felt her heart slow. Again, she thought, Away.
And she was. Back on the train just as the light filled the sleeper, just as everything turned a glimmering silvery white. She felt herself floating, falling, knowing.
It is trauma that sends us away, but there is pain also where we land.

A BuzzFeed Most Anticipated Book of 2021
Reader's Digest 50 Best Fiction Books of 2021
A Booklist Top 10 Historical Fiction Book of 2021
Praise for Annie and the Wolves
“I have long been a fan of Andromeda Romano-Lax’s work, and this is her best novel yet. Separated by more than a century, the lives of American icon Annie Oakley and modern historian Ruth McClintock are intertwined in ways you could never guess. Delving into the human psyche, the novel explores how we navigate time and memory, and how we struggle to heal from trauma both historically and on a deeply personal level. Are justice and revenge the answer? Or can we dare to hope to change the past? When this story grabs hold of you, and it will, there will be no setting it down until you’ve finished the last page. A morally complex, genre-shattering thriller.”
—Eowyn Ivey, New York Times bestselling author of To the Bright Edge of the World and the Pulitzer Prize finalist The Snow Child
“Themes of vengeance, justice, long-buried secrets, and impending doom are woven through this engaging tale of strong, resourceful women.”
—Reader's Digest
“On its most powerful level, the book is a hyperactive psychological thriller, exploring the enduring damage done by childhood trauma and the need to mine and process it to become healthy, and the various ways in which victims do so . . . A highly imaginative and compelling read.”
—Minneapolis Star Tribune
“The introduction of the time travel is so adeptly written that the idea of this kind of element doesn’t seem out of the ordinary . . . the book reads like literary or historical fiction, even though many different current topics are addressed within its pages, like school violence, suicide and sexual abuse.”
—Pittsburgh Post-Gazette
“A sharp, inventive story of perseverance.”
—BuzzFeed Books
“This unique novel touches on women who excel in a traditionally male-dominated world, but must continue to grapple with its absurd contradictions about female roles in society.”
—Tahlequah Daily Press
“I’ve always held a special place in my heart for Annie Oakley, and Andromeda Romano-Lax has forever transformed my vision of the famous sharpshooter in such a fresh, deep, moving way. I love how this novel plays with the malleability of time—how trauma can alter it, how healing can transcend it, how human connection can enrich it immeasurably. Time disappeared as I read Annie and the Wolves—a compelling, unforgettable read.”
—Gayle Brandeis, award–winning author of The Book of Dead Birds
“Annie and the Wolves intrigued me with its countless twists and turns. It’s a Mobius Strip of history, time travel and complex characters, all masterfully woven into a suspenseful and satisfying ending. Bravo.”
—Kim Heacox, author of Jimmy Bluefeather
“Romano-Lax uses a dual timeline to weave science fiction and historical fiction into one timely, suspenseful, and complicated tale . . . [T]he book addresses many topics and themes, some disturbing—abuse, mental illness, suicide, the human psyche, revenge, and memory among them—but it never feels heavy.”
—Literary Mama
“Romano-Lax’s brilliantly conceived characters, delicate exploration of abuse and childhood trauma, and examination of vengeance and its power to heal will entrance from the very first page. Her latest is a tour de force that will appeal to a wide variety of readers.”
—Library Journal, Starred Review
“Daring and imaginative Romano-Lax puts another provocative spin on historical fiction as she has both Ruth McClintock, a struggling small-town Minnesota historian,and her obsession, sharpshooter Annie Oakley, take turns narrating in this highly original time-warping tale . . . As she illuminates Oakley’s extraordinary life, Romano-Lax conjures supernatural dimensions in pursuit of psychological revelations, grapples with the sexual predation of “wolves” and the muzzle of shame, and dramatizes the slipperiness of memory and history, creating a compassionate, heady, and witty whirl of fact and insight, mesmerizing characters and suspenseful predicaments.”
—Booklist, Starred Review
“Romano-Lax writes with an easy verisimilitude, even when things turn decidedly strange. But it’s not simply strangeness for the sake of itself. The time-skipping mechanism allows for a deeply felt exploration of the lingering costs of trauma, the nature of history, the limited malleability of the past, and the importance of community and relationships, particularly when it comes to present trauma and its potential to spin out into further acts of violence . . . It’s rare to be genuinely surprised by a novel: Annie and the Wolves is a treasure.”
—Quill & Quire, Starred Review
“With Annie and the Wolves, Romano-Lax has authored a reckoning tale for the historical traumas that still shape America today . . . Annie and the Wolves is a remarkable feat of plotting in that it braids together heavy subject matter Oakley’s biography, the history of psychoanalysis, sexual abuse, gun culture, and, yes, time travel, without becoming convoluted or pedantic. Romano-Lax so skillfully navigates parallel storylines and multiple perspectives that, even at just over four hundred pages, this work of speculative literary fiction, like time, flies by.”
—Cleveland Review of Books
“Annie and the Wolves’s primary appeal stems from its inability to be pegged into a single genre. Part historical fiction (Annie Oakley), part science fiction (time travel), and part literary fiction (a struggling modern-day historian), this book tackles abuse, secrets, and revenge. A fascinating story that leaves readers wondering how much our actions can influence the future.”
—Beth Shapiro, Skylark Bookshop (Columbia, MO)
“An engrossing work of speculative fiction featuring a time-traveling Annie Oakley . . . Romano-Lax neatly weaves the parallel narratives of Oakley and Ruth, and juggles various literary devices and genres with aplomb. The dual storylines dovetail perfectly for a winning anthem of female power sustained across a century.”
—Publishers Weekly
Praise for Andromeda Romano-Lax

“Will keep you mesmerized to the last page.”
—Christian Science Monitor

“Shocking and thought-provoking . . . The intimate struggles of a woman weighing her value, utility, and satisfaction both within and outside the home certainly resonate today.”
—The Boston Globe

“An engaging read which will not only entertain you but also teach you a great deal about these giants in the history of psychology, and the ethics of those times, which we now see as abhorrent.”
—Psychology Today

Other titles by Andromeda Romano-Lax