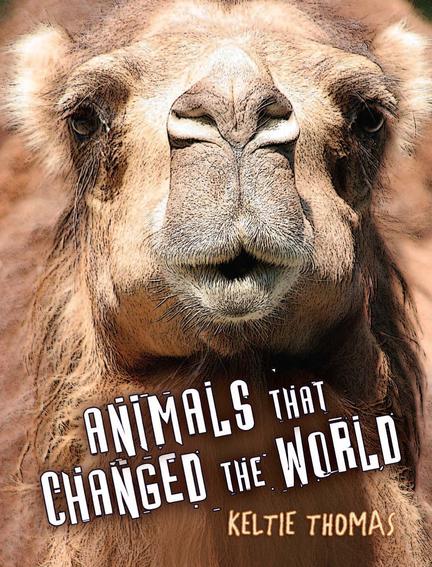 From furry felines to hard-working horses, animals have had a tremendous impact on world history. For example, rats, through the diseases they carry, have probably killed more people than any war or natural disaster, goats may have been the first to discover coffee and, thanks to camels, people were able to survive for long periods in the desert and open up trade routes between Europe and Asia.

However, animals can also be destructive. Mosquitoes spread deadly diseases — and may even have killed Alexander the Great. Some animals have changed the environment by damaging whole ecotems, creating deserts in their wake. Others, like the elephant, have been used as weapons of war.

Among the more than 20 animals featured in this book are dogs, sheep, dolphins, silk moths and beavers, all of which have changed the course of history for better or for worse. Lighthearted and humorous, with intriguing photos and informative sidebars, this book ensures that readers will appreciate all animals with newfound awe and respect.

KELTIE THOMAS is a passionate sports fan and award-winning children’s science writer and editor. She is a former editor of OWL Magazine, and is the author of popular sports books such as How Baseball Works; Blades, Boards & Scooters; and Inside Hockey! She lives in Toronto.

Animals that Changed the World

Annick Press’s two new books about animals written by veteran science writers have exceptional visual treatments to suit each title and its potential readers. The jocular tone of Keltie Thomas’s Animals that Changed the World, and the seven chapters set up in text bites and inset sections, make it an accessible giggle-and-grab fact book. The busy design by Sheryl Shapiro has corralled an astonishing number of images together through some original treatments, such as a textured background of elephant’s skin.

The second book by author Claire Eamer, Lizards in the Sky: Animals Where You Least Expect Them, is lyrically written in six chapters with longer text sections. The fact insets, only one per page, usually serve as captions for the good-sized photographs. A bright yet soft design by Irvin Cheung brilliantly complements images with the inclusion of illustrations by Sir John Tenniel. Tenniel’s frog footmen, dodo birds and monsters originally decorated Alice’s Adventures in Wonderland and Through the Looking-Glass. The overall effect is streamlined and visually soothing.

In addition to attractive visuals, both books have indexes useful to middle-grade researchers. They include sections for Further Reading that, curiously, do not list websites. Thematically, the two titles take interesting views of the natural world. In Animals that Changed the World, Keltie Thomas, author of a number of non-fiction books such as How Figure Skating Works, gives a fresh look at how animals (mostly non-human) have influenced physical geography and social history. For example, the domestication of goats is partially responsible for destroying habitat and creating deserts in North Africa; and the fabrication of silk from silk worms prompted travel and trade. Thomas also informs how interactions with humans have changed some animals: not that sheep will be suing us any time soon for their smaller-sized brains.

“Talk About the Beast” sections on the history of phrases linked to animals sometimes use dated phrases. “Mammoth” problems or “til the cows come home” might not be in current usage. “Mug Shot,” the animal overview; “Fact Track,” single tidbits; and the timeline at the back are neat info-features. Readers will have a blast exploring new perspectives about human development as they swing through this book.

In Lizards in the Sky: Animals Where You Least Expect Them, Claire Eamer (Super Crocs and Monster Wings) says she is “entranced” by the natural world and sets out to share her discov- eries of places where more than thirty animals live. From worms that snuggle into ice, to birds that inhabit black caves, Eamer looks in ice, water, deserts, the dark, the sky and underground to reveal how some of these denizens of surprising places have adapted to their habitats. This pleasantly written book will be a good fit for middle-graders with enough reading muscle to digest a few pages of text. It will be hard for readers of Lizards in the Sky to pick the most interesting fact, but I think they will have fun trying.

Reviewer and author of four non-fiction books, lian goodall is a heritage programmer and consultant.

Animals That Changed the World

Animals have helped win wars, changed the environment, provided food and clothing and spread deadly disease. This fascinating book looks at over 20 animals — from mammoths to mosquitoes and dinosaurs to dolphins — that have had a major influence in shaping the world. Filled with fantastic photos and lots of interesting information, this book will thrill young animal lovers.

Other titles by Keltie Thomas

Answers to Kids' Questions About Lakes

The Legends, Facts and Feats That Made the Game