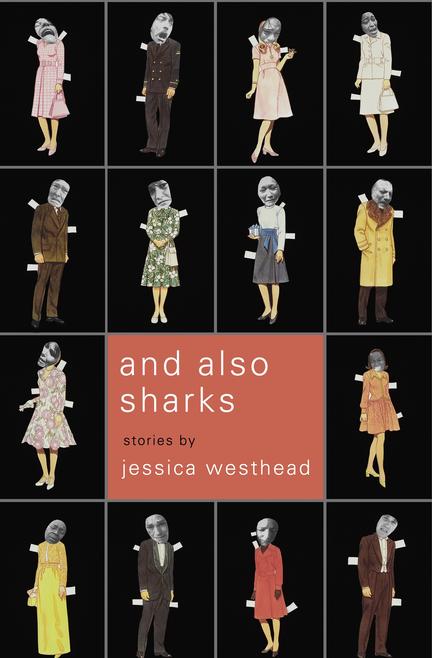 The forlornly funny stories in And Also Sharks celebrate the socially awkward, the insecure, the unfulfilled, and the obsessed.

A disgruntled follower of a self-esteem blog posts a rambling critical comment. On the hunt for the perfect coffee table, a pregnant woman and her husband stop to visit his terminally ill ex-wife. The office cat lady reluctantly joins her fellow employees’ crusade to cheer up their dying co-worker. A man grieving his wife’s miscarriages follows his deluded friend on a stealth photo-taking mission at the auto show. A shoplifter creates her own narrative with stolen anecdotes and a kidnapped baby.

In this collection, society’s misfits and losers are portrayed sympathetically, and sometimes even heroically. As desperately as these characters long to fit in, they also take pride in what sets them apart.

Brittany Smith is a Toronto-based writer of long and short fiction. Her work has appeared in the Humber Literary Review, Broken Pencil, and in the journals Pithead Chapel and Echolocation. Most days you can find Britt working as a writing coach at Firefly Creative Writing.
Lana Pesch’s debut story collection, Moving Parts, was published in 2015 and shortlisted for the 2016 ReLit Awards. She has written and produced plays for stage, radio and film and her writing has appeared in Little Bird Stories: Volumes I and II and Taddle Creek, Geist, and ELLE Canada. She was longlisted for the 2014 CBC Short Story Prize and won the Random House of Canada Creative Writing Award at the University of Toronto in 2012. Lana was born in Saskatchewan, studied in Montreal, and is an alumnus of the Banff Wired Writing Studio. She lives in Toronto and is a freelance writer, editor, and producer.
A graduate from the Masters in Creative Writing program at the University of Wales, Mary B. Valencia has published in Descant, Existere, the Globe and Mail, bunchfamily.ca, NOW Magazine, and with Gomer Press in the UK. She received the 2012 EVENT creative nonfiction prize and was first runner-up in the 2010 PRISM international fiction contest. Her writing is now appearing at comedy venues across Toronto as part of her stand-up persona routine Mary Bee.

“A suite of stories that are funny and uncomfortable, often at the same time … A collection that proves, on points, that short stories are much more than just poor cousins of the novel … Westhead is adept at providing caustically funny snapshots of lives that are twisted by loss, loneliness or boredom.”

“Rarely can I wrap myself tight in a text, fully engrossed. Jessica Westhead’s And Also Sharks is a brilliant exception … All at once, [Westhead] is unsettling, endearing, funny, sad, surprising and all else. In short, [this is] stunning short fiction.”

“With its well-crafted humanist focus and the usual Westhead confluence of charm, timing, suspense and hilarity, [And Also Sharks] could end up vying for one of the sleeper-hits-of-the season-status by the time we’re all in flip-flops.”

“Westhead’s characterization and narrative style are compelling for the sense of ease with which they are executed. Each story is told through a mixture of second- and first-person perspective, turning the tone from contemplative and self-conscious to interactive and playful … If you are familiar with Westhead’s writing, you know there’ll always be something that catches you off-guard … The collection is full of just such catches, and they set off random, jarring and awkward circumstances that get played out from one blundering character to the next.”

“Westhead illuminates all these losers in a way that becomes so situationally sympathetic, you just have to love them, this perfectly weird mixed-bag of reality.”

“Westhead’s use of launguage is skilful and comic, and this collection features many well-crafted sentences timed to perfect effect … With her penchant for supremely neurotic protagonists and thematic complexity, and her rich sense of the absurd, Westhead may have a claim to being CanLit’s Woody Allen.”

“What blew me away was Jessica’s ability to have all the tensions, all the powerful undercurrents, swim effortlessly beneath the surface of these stories, in the words unsaid. And then there’s the abundance of laugh out loud absurdity in these perfectly normal lives and characters. Westhead’s penchant for making ordinary lives feel extraordinary is a rare gift to say the least … the voices in these stories are fun like fireworks.”

“Terribly, terribly funny, and horribly sad at once, and also wonderful. That a single thing can be all three is a statement of Westhead’s considerable talent.”

Other titles by Jessica Westhead

Things Not to Do

We Are All About Wendy Now