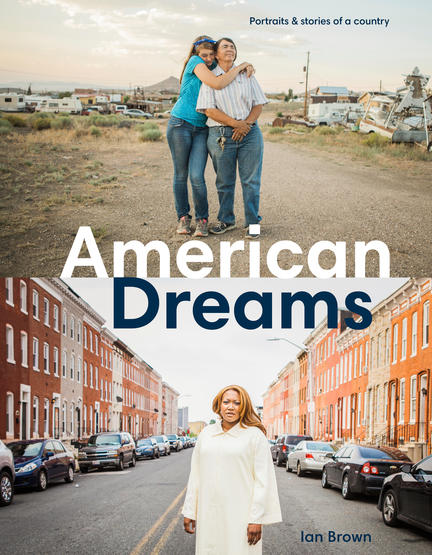 A powerful, moving collection of 170 portraits of Americans and their handwritten statements about what the American dream means to them.
Shot by one photographer over twelve years, fifty states, and eighty thousand miles, American Dreams is a poignant, defining look at people from every walk of life and a remarkable exploration of what it means to be an American.

Long fascinated by the idea of the “American Dream,” Canadian photographer Ian Brown set out to document, in photographs and words, what that dream means to Americans of all ages, races, identities, classes, religions, and ideologies. Over the course of twelve years, Brown traveled more than eighty thousand miles in an old truck, visiting all fifty states and connecting with hundreds of Americans. He knocked on people's doors; met them at town halls, diners, and factories; and approached them on main streets in small towns. He shot their portraits and asked them to write down their own American dreams. Their dreams and stories—which range from hopeful, moving, and optimistic to defiant, bitter, and heartbreaking—offer a fascinating, unparalleled perspective of the striking diversity and deep nuance of the American experience.

Ian Brown is an award-winning journalist and broadcaster. He is the author of the national bestsellers The Boy in Moon: A Father's Search for His Disabled Son, Man Overboard: True Adventures with North American Men, and Free Wheeling, which won a National Business Book Award. Brown’s reporting and writing have won six gold National Magazine awards and two National Newspaper Awards. A roving feature writer for the Globe and Mail, he is also a contributor to This American Life on U.S. public radio, and host of both CBC Radio’s Talking Books and Canada’s pre-eminent documentary television series, “Human Edge” and “The View From Here.” He lives in Toronto with his wife and two children.

I still remember the voice, booming and sure, with an accent that was different from any I’d heard before. “Headed north,” it said. “Goin’ to see snow.”

It was the summer of 1979, and I was on my annual summer visit with my grandparents. We had stopped to fill up on gas on the way to the quaint Canadian town of Lakefield, Ontario. My sister and I loved these forays into simple country life, where we had a ritual of getting ice cream and eating it at the bakery or by the lake. It was a typical Ontario summer day: hot, sticky, and humid, with the sound of cicadas singing and the hum of lawn mowers in the air.

I couldn’t see the expression on my grandfather’s face from my spot in the back seat of his yellow 1976 Dodge Aries, but I imagine him smiling broadly as he responded. “Snow? You’ll be driving for quite a while until that happens.”

I strained to look out the window and observe the man with the booming voice—he was very large and stood beside a big car with a back seat full of kids and a trunk packed with bags and suitcases. After a few minutes of pleasant conversation, my grandfather got back in the car and we headed into town. He explained that the loud-voiced guy was an American from somewhere “down South” who had packed up his family to drive north to Canada—in the summer, no less—to see snow.

Granted, the internet hadn’t yet been invented, so it’s not as if the man could have googled it. But it was the late 1970s, so maps, books, newspapers, and television all did exist. And even though I was only in grade school, it seemed wildly presumptuous—and maybe even a little ignorant—to think that there would be snow in Ontario in the summer.

As we pulled up to the Lakefield bakery to get ice cream, my grandparents shared a good laugh. “Americans!” they said knowingly to each other.

The encounter with the loud man was the first time I understood that Americans were different. The voice, the tone, the accent, and the sureness with which he spoke made an impression on me. This man was certain that he was going to see snow, and he was willing to disregard the fact that he was sweating, the asphalt was searing hot, and the grass was brown. It was so intriguing, and made Americans seem particularly interesting to me. Who were they?

As the northern neighbor of the world’s most powerful country, Canada has a unique perspective on the United States. As former Prime Minister Pierre Trudeau said in 1969, “Living next to you is in some ways like sleeping with an elephant. No matter how friendly and even-tempered the beast, if I can call it that, one is affected by every twitch and grunt.”

The majority of Canada’s thirty-seven million people live within a hundred miles of the US border. We have all the same news sources, for the most part (Canada has their own stations, of course, but we tend to get our news from global sources), and anyone who grew up (as I did) in the 1970s and ’80s watched more American TV channels than Canadian ones. Living in Toronto, we got our US news feeds from Buffalo, New York. There was always something strangely fascinating about the number of fires and snowstorms that seemed to be reported on the Buffalo news. And Buffalo sports coverage was mostly about American football, while ours was mostly about hockey.

When President Reagan was shot in March 1981, I was thirteen years old, sitting on the living room carpet with my mom in an anxious hush, listening to the breaking news on the radio. It was around that time that I started to become aware that there were things going on in America that had little bearing on us in Canada. I also recognized that not much that happened in my country had much relevance in America. It was as if the border—only an hour and a half away from where I lived—was not just a boundary that separated the two countries, but a demarcation line that separated cultures and ideals. “Cross the border and it’s instantly different,” I recall people saying about visiting America.

My own travels to the United States when I was growing up mostly consisted of trips to Florida in the winter to visit relatives. We would fly down for school break and spend the majority of our time at the pool in a mobile-home complex of retired “snowbirds.” Up until then, I hadn’t really spent much time on the ground in America. My impression of the American landscape was formed from looking out the window of an airplane, and from watching movies and television, like much of the rest of the world.

As I grew older, I began to travel more. I spent a summer backpacking across Europe with virtually no money. I went back with even less money the following year, doing what was essentially a version of homeless traveling. Distance offers clarity, and each time I returned home, I felt acutely aware of the subtle differences that every culture and place present. Travel gave me an understanding of the ways in which we believe our circumstances and our way of life to be our “normal,” and how being exposed to different ways of being inevitably grows our capacity for empathy and compassion.

Sometime in the mid-’90s, while I was in my twenties, I ended up on a road trip through some of the Rust Belt towns of northern Pennsylvania and Ohio. Even then, it was evident that the manufacturing prowess of these towns was in decline. As we drove, I became increasingly distressed—I hadn’t imagined that there would be so many boarded-up shops, so many junked cars left to rot in fields. There was an edge, a sense of despair that I hadn’t thought I’d see in America. And yet, a few minutes’ drive from some of the blighted sites, we’d pass through a prosperous-looking strip of stores, then enclaves of huge, beautiful homes. The whole tableau would repeat itself again—areas of obvious struggle and decay abutting areas of prosperity and affluence. The disparity was striking.

This idea of the American Dream has always been rooted in the fundamental mythology of American culture, despite the fact that it’s not written into the Constitution or any other important founding document. And, true to the mythological nature of the concept, it doesn’t have any one definition. At its most basic, the American Dream is understood to be the idea that if a person works hard enough, they’ll have an opportunity to better their life. Author James Truslow Adams was one of the first writers to popularize the phrase in his 1931 book, The Epic of America:

But there has been also the American dream, that dream of a land in which life should be better and richer and fuller for every man, with opportunity for each according to his ability or achievement.

Though it hasn’t been formalized or legally encoded in any way, the American Dream is something that many people believe in, and that people around the world have heard referenced, whether or not they have ever set foot in the United States. Every American has, at some point, learned about the opportunity to live the American Dream, and likely grew up hearing that America is the greatest country on earth. Former vice president Dick Cheney wrote of America in his memoir: “We are, as a matter of empirical fact and undeniable history, the greatest force for good the world has ever known.”

The premise that a whole nation could be persuaded by the promise of a shared dream intrigued me. As a photographer interested in the human condition, I was taken by the idea that a model of success could be shared by—or imposed upon—the citizens of a whole country. It seemed like a really fuzzy concept to me, this idea that America, over any other country, is the best place to achieve your dreams. People all over the world aspire to build better lives for themselves and their families. But no one’s ever heard of the “British Dream” or the “Japanese Dream” or the “Canadian Dream” . . . It’s such a distinctly American idea, this notion that has been so tightly woven into the fabric of the national psyche, despite the distance between the mythology of the dream and reality for most Americans. Even in the richest and most powerful country on earth, there is such an abrupt division between wealth and struggle, and such a wide spectrum of deeply held ideals. The expectations, the hope, and the irony built into the American Dream became completely fascinating.

Other titles by Ian Brown

Discovering the Meaning of Life with Aristotle

A Diary of My Sixty-First Year: The Beginning of the End, or the End of the Beginning?

Somewhere Over the Sea

A Father's Letter to His Autistic Son

The Boy in the Moon

A Father's Search for His Disabled Son

What I Meant to Say

The Private Lives of Men