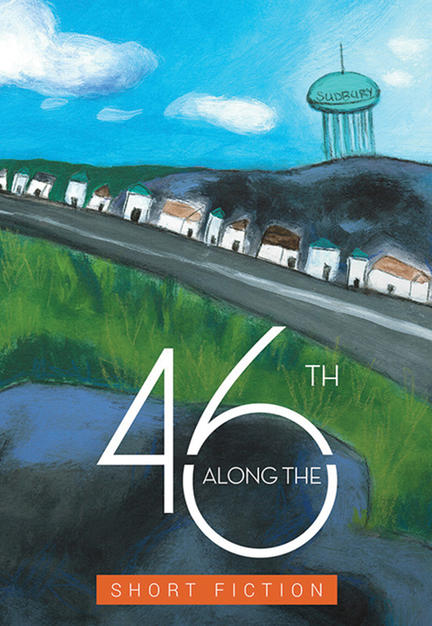 Along the 46th is an anthology of short stories from 13 new and established authors from Northern Ontario.

Kim Fahner was the fourth poet laureate of the City of Greater Sudbury (2016-18), and was the first woman to be appointed to the role. She has published four volumes of poetry, including You Must Imagine the Cold (Scrivener Press, 1997), braille on water (Penumbra Press, 2001), The Narcoleptic Madonna (Penumbra Press, 2012), and Some Other Sky (Black Moss Press, 2017). She is also a playwright and a novelist.

Born in a meteor crater, Matthew Heiti holds a BFA in Acting from Ryerson University and an MA in Creative Writing from the University of New Brunswick. His plays have been workshopped and produced at theatres and festivals across Canada. Matthew runs the Playwrights’ Junction at the Sudbury Theatre Centre, a workshop for developing writers; and he serves as playwright-in-residence with Pat the Dog Theatre Creation where he coordinates PlaySmelter, the region’s festival of new play development. He is a Genie-nominated screenwriter and his first novel, The City Still Breathing, is published by Coach House Books. Matthew was named one of CBC’s Writers to Watch in 2014. He lives in Sudbury.

Liisa Kovala is a Finnish Canadian author and teacher. Her first book, Surviving Stutthof: My Father's Memories Behind the Death Gate (Latitude 46, 2017), was shortlisted for a Northern Lit Award and published in Finland under the title Stutthofin selviytyjä (Docendo, 2020). Her work is inspired by her Finnish heritage and the northern landscape she calls home. Sisu's Winter War is her debut novel. She lives in Sudbury, Ontario with her husband and two children.

Mitchell Gauvin's fiction, non-fiction and poetry have appeared in a variety of publications including NEST by Gutterbird, The Sudbury Star, The Varsity, Feathertale and CanCulture Magazine. He lives and works in Sudbury, Ontario and Vandal Confession is his first novel.

Thomas L. Leduc is the descendant of four generations of miners and works at an industrial supply company in Sudbury.His poetry and writing has been appeared in anthologies and magazines in Canada and the U.S. Tom was Poet Laureate of the City of Greater Sudbury between 2014 and 2016. He is President of the Sudbury Writers' Guild. He lives in Sudbury with his wife and two children.

At three years of age, Rosanna Micelotta Battigelli immigrated from Calabria, Italy, to Sudbury, Ontario, Canada with her family. During her teaching career, she received four OECTA (Ontario English Catholic Teachers’ Association) Best Practice Awards for her unique strategies in early literacy and other initiatives. An alumna of the Humber School for Writers, her writing has been published in nineteen anthologies. Her novel, La Brigantessa, published in 2018, won a Gold Medal for Historical Fiction in the 2019 Independent Publisher (IPPY) Book Awards. La Brigantessa was also a finalist for the 2019 Canadian Authors Association Fred Kerner Book Award and the 2019 Northern Lit Award. Her children’s book, Pumpkin Orange, Pumpkin Round, was published in the fall of 2019, and she has published two novels with Harlequin UK (2018, 2020). She lives in Sudbury. www.rosannabattigelli.com

Darlene Naponse is an Anishinaabe from Atikameksheng Anishnawbek, Northern Ontario, where she was born and raised. She is a writer, independent film director, video artist, and community activist. She completed her MFA in Creative Writing at the Institute of American Indian Arts (IAIA) in Santa Fe. Several of her short stories have been published in the Yellow Medicine Review, Along the 46th Anthology, and The Malahat Review. She is currently working on a book of short stories. She works from her studio on the Rez (Atikameksheng Anishnawbek).

Laura E. Young is a journalist based in Sudbury and the author of the award-winning Solo Yet Never Alone Swimming the Great Lakes. A graduate of the University of Kings College in Halifax, N.S., she has worked in various media in Northern Ontario and has won awards for sports, feature, and spot-news writing through the OCNA. She teaches in Cambrian College's public relations program and is a certified lifeguard, swimmer and advocate for water quality and safety.

Other titles by Kim Fahner

Other titles by Matthew Heiti

Other titles by Liisa Kovala

My Father's memories behind the Death Gate

Other titles by Thomas Leduc

Other titles by Karen McCauley

Poems Unearthed From A Mining Town

150 Years Up North and More

Other titles by Eric Moore

Pigeon Soup and Other Stories

Other titles by Tina Siegel

Before the Usual Time

A Collection of Indigenous Stories and Poems.

Other titles by Mitchell Gauvin