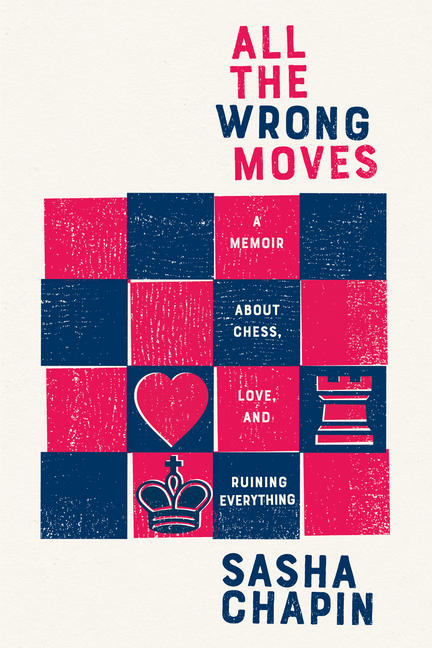 An enthralling journey into the world of chess--a story of heartbreak, obsession, failure, and the hunger for greatness.

Sasha Chapin is a victim of chess. Like countless amateurs before him--Albert Einstein, Humphrey Bogart, and Marcel Duchamp among them--the game has consumed his life and his mind. First captivated by it as a member of his high school chess club, he found his passion rekindled during an accidental encounter with chess hustlers on the streets of Kathmandu. In its aftermath, he forgot to care about anything else. Like a spurned lover, he tried to move on, but he found the game more seductive the more he resisted it.

And so, he reasons, if he can't defeat his addiction, he will try instead to master the game.

All the Wrong Moves traces Chapin's rollicking two-year journey around the globe in search of glory. He travels to tournaments in Bangkok and Hyderabad. He seeks out a mentor in St. Louis, a grandmaster whose personality is half rabbi and half monk, and who offers cryptic wisdom and caustic insults ("you're the best player in your chair.") His story builds toward the Los Angeles Open, where Chapin is clearly outmatched and yet determined not to lose.

Stylish, inventive, and laugh-out-loud funny, All the Wrong Moves is more than a work of history or autobiography. It is a chronicle of the highs and lows of obsession, of love pursued to its limits, and of a life driven by lust, terror, and the elusive possibility of victory.

SASHA CHAPIN is an award-winning journalist and recovering chess enthusiast. His writing has appeared in The New York Times Magazine, on BuzzFeed, and on Hazlitt. He is from Toronto and lives in Los Angeles.

Excerpt: All the Wrong Moves: A Memoir About Chess, Love, and Ruining Everything (by (author) Sasha Chapin)

The 600 Million
Perhaps the surest sign that you’re in love is that you can’t stop talking. You find yourself announcing the name of your beloved at the slightest provocation. Given any opportunity, you engage in a vain attempt to explain your infatuation. Everything else seems unworthy of a single moment’s attention or discussion. No matter how shy or stoic you are, real affection demands expression.

And this is no less true when the object of your affection is the game of chess. In other words, when you’re me.

But this poses a bit of a problem. It’s tricky to explain the appeal of chess to someone who doesn’t play. Unlike the beauty of other sports, the majesty of chess is somewhat opaque to the uninitiated. Basketball, I’m sure, has infinitesimal subtleties I can’t fully appreciate, but when I’m watching a game, I can still sense that LeBron is doing something really cool. The sheer physicality is imposing—the taut calves, the curves carved in the air by the ball meeting the basket. Not so with chess. All you do is look at two nerds staring at a collection of tiny figurines.

And yet, my love of chess demands that I continue, that I somehow communicate why chess captivates me in ways that nothing else ever could. Why I’ve neglected food, sex, and friendship, on many an occasion, for its charms. Why nothing—not love, not amphetamines, not physical danger—makes my heart beat harder than the process of cornering an opponent’s king.

If you think this is crazy, I agree. But it deserves mentioning that I’m not the only crazy one. Albert Einstein and Humphrey Bogart were similarly affected by the thirty-two pieces on the sixty-four squares. And, some centuries before that, Caliph Muhammad al-Amin, ruler of the Abbasid empire, insisted on continuing a promising endgame as marauders penetrated his throne room, decapitating him shortly after he delivered checkmate.

I didn’t get decapitated, so my affair with chess really wasn’t so bad. All I got was the total consumption of my soul.

Like so many affairs, it began with an accidental flirtation that became an all-devouring union—two years during which I did little else but pursue chess mastery. Despite my obvious lack of talent, I leapt across continents to play in far-flung competitions, studied with an eccentric grandmaster, spent almost all of my money, neglected my loved ones, and accumulated a few infections. And I did it all for a brief shot at glory—a chance to take down some real players at a tournament in Los Angeles, where my place in humanity was determined, as far as I’m concerned.

Maybe if you come back with me, through those nights of chasing imaginary kings with imaginary queens, along my winding road to the San Fernando Valley, you’ll understand my love of chess. Maybe you’ll even understand why, according to recent estimates, one in twelve people in the world play chess in some capacity. Maybe you’d like to know what’s been captivating well over 600 million souls while you were doing whatever you do.

Frankly, I didn’t feel like I was doing much until chess came along. Sure, there were momentary rages, dwindling loves, and, occasionally, a charming vista. But it was all part of an unformed sequence of anecdotes, through which I was stumbling sideways, grasping at whatever I could, whether it was some form of self-destruction or a nice afternoon walk. By contrast, when chess appeared, it felt like a possession—like a spirit had slipped a long finger up through my spine, making me a marionette, pausing only briefly to ask, “You weren’t doing anything with this, were you?”

Praise for All the Wrong Moves:

"Sasha Chapin writes like someone who knows. He knows euphoria. He knows despair. It's clear that he's traveled to hell and back, that he is fluent in languages of the heart that have yet to be spoken, and All the Wrong Moves is the brightest light." —Bryan Washington, author of Lot: Stories

"A smart, funny, and slyly profound book about the dark ecstasies of obsessive love. Sasha Chapin is a gentlemanly Gonzo, a dirty Bond, and he writes like a dream." —Claudia Dey, author of Heartbreaker

“All the Wrong Moves is a touching and brilliant portrait of masculinity. Chapin writes with arresting honesty, capturing the manner in which none of us are truly in control of our personalities. He humiliates himself in all the right ways, and the results are luminous and profound and hysterical.” —Heather O’Neill, author of The Lonely Hearts Hotel

"Thoughtful and clever . . . Chapin's sincere memoir of self-discovery will charm chess enthusiasts, as well as those searching for their next move in life." —Publishers Weekly

"[Chapin] infuses the narrative with exuberant, often funny, anecdotes; glimpses of strategy; and lyrical reflections. . . . An entertaining portrayal of the esoteric world of chess." —Kirkus Reviews

"Wryly funny, introspective, and grimly evocative, Chapin's memoir is perfect for a brief wade into the world of chess, or as a jumping off point for a much deeper dive." —Booklist