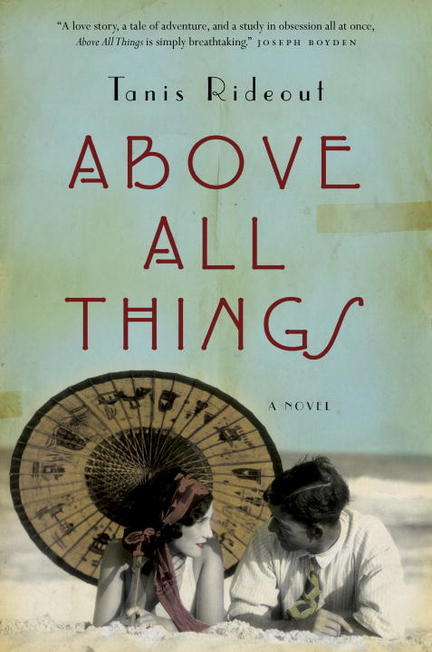 The Paris Wife meets Into Thin Air in this breathtaking debut novel of obsession and divided loyalties, which brilliantly weaves together the harrowing story of George Mallory's ill-fated 1924 attempt to be the first man to conquer Mount Everest, with that of a single day in the life of his wife as she waits at home in England for news of his return.

A captivating blend of historical fact and imaginative fiction, Above All Things moves seamlessly back and forth between the epic story of Mallory's legendary final expedition and a heartbreaking account of a day in the life of Ruth Mallory. Through George's perspective, and that of the newest member of the climbing team, Sandy Irvine, we get an astonishing picture of the terrible risks taken by the men on the treacherous terrain of the Himalaya. But it is through Ruth's eyes that a complex portrait of a marriage emerges, one forged on the eve of the First World War, shadowed by its losses, and haunted by the ever-present possibility that George might not come home.
Drawing on years of research, this powerful and beautifully written novel is a timeless story of desire, redemption, and the lengths we are willing to go for honour, glory, and love.

TANIS RIDEOUT received her MFA from the University of Guelph-Humber, and she has been a finalist for the Bronwen Wallace Award for Emerging Writers and the CBC Literary Awards. In 2006, she was named Poet Laureate for Lake Ontario by Lake Ontario Waterkeeper and joined Gord Downie on a tour to promote environmental justice on the lake. Sometimes referred to as the Poet Laureate of CanRock, Tanis joined Sarah Harmer’s I Love the Escarpment Tour to read a commissioned poem. She was born in Belgium, grew up in Bermuda and in Kingston, Ontario, and now lives in Toronto.

“This is a fascinating, true story and Canadian Tanis Rideout has done justice to its harrowing quality in her debut novel, Above All Things. . . . The great power of the novel, understandably, is not these internal debates but Rideout’s description of the battle between the vulnerable bodies of the climbers and the invulnerable mountain. In describing this battle, Rideout’s prose is almost lyrical. . . . History tells us, of course, that George Mallory did not succeed, but this foreknowledge does not diminish the suspense of Rideout’s narrative. It will be a stony-hearted reader who does not hope against hope that George makes the summit and returns alive.”
—Philip Marchand, the National Post

“Tanis Rideout certainly isn’t the first writer to probe the Mallory story, but her graceful turns of phrase, her realistic knack of winging us back and forth between Cambridge and Everest, and her powerful portraits of Mallory and his climbing team allow Above All Things to reach its own spectacular literary summit.”
—Toronto Star

“Tanis Rideout’s debut novel Above All Things reaches unimaginable peaks. Prepare your heart. . . . At the height of Above All Things is timeless romance, an unflinching love story that touches the very core of the human condition. Rideout leaves readers holding the book close to their chest, knowing that the purpose of life, above all else, is love.”
— Telegraph-Journal

“Like Wade Davis’s 2011 non-fiction epic Into the Silence, Rideout’s novel is the product of years of research. But freed from the constraints of history, she delves into the thoughts and emotions of her main characters. . . . Vivid and gripping . . .”
—Winnipeg Free Press
“[A] knockout first novel. . . . The author has exhilaratingly imagined the British climber’s third and final attempt to reach the mountain’s summit in 1924 through extensive research and attention to detail, creating an atmosphere as authentic as in Jon Krakauer’s Into Thin Air. . . . Rideout has written a superb addition to the fictional biography genre popularized by novels like Loving Frank and The Paris Wife. Buy it. Recommend it."
—Library Journal (Starred Review)

“This vivid, assured, and confident debut novel scales great heights of obsession and desire, both on the face of Mount Everest and in the loving bond between doomed explorer George Mallory and his wife, Ruth. . . . The author’s accomplished depiction of the harsh and beautiful Himalayan heights, the physical drain of the climb, the bitter, brutal cold and thin, grudging air pushes the reader forward in a gripping adventure narrative, while Ruth’s own longings and fears offer a counterpoint of a more settled but no less intensely sensual interior landscape.”
—Publishers Weekly (Starred Review)

“A love story, a tale of adventure, and a study in obsession all at once, Above All Things is simply breathtaking. With Tanis Rideout’s debut, a major new voice in Canadian fiction arrives.”
—Joseph Boyden, Scotiabank Giller Prize-winning author of Through Black Spruce

“Above All Things has it all: adventure, tragedy, mystery, and a deeply moving love story. It’s gorgeously written and beautifully paced. I could not put it down. Prepare to be dazzled.”
—Alison Pick, author of the Man Booker Prize-nominated Far To Go

"'Because it's there.'  With just three words, George Mallory explained why explorers do what they do.  Yet beyond these words, volumes have been left unsaid.  With Above All Things, Tanis Rideout finally fills in this void, illuminating one of the great, tragic adventure stories of the modern-day age. It's a fantastic read."
—David Grann, New York Times bestselling author of The Lost City of Z

"Tanis Rideout’s Above All Things is truly mesmerizing, a powerful weaving of the tensions and heartaches of a marriage in conflict with an obsession. It is the story of British climber George Mallory’s third scaling of the walls of the world’s highest mountain, and it is brilliantly told. It will take you up the slopes of Mount Everest, a climb so vividly described, you will almost feel the biting wind, the intense cold, the great drama of an historic event.  But this is more than an adventure tale. Above All Things takes the reader into the hearts of both Mallory and his wife as they struggle to understand each other and their own conflicted yearnings. A deeply satisfying blend of truth and imagination that stands out from the crowd."
— Kate Alcott, author of The Dressmaker

My Favourite Read this Spring

A wonderfully written fictional account of George Mallory's quest for glory and how the wives of adventurers cope. Hard to believe this is the author's first novel....looking forward to more!

Other titles by Tanis Rideout

The Sea Between Two Shores

Arguments with the Lake