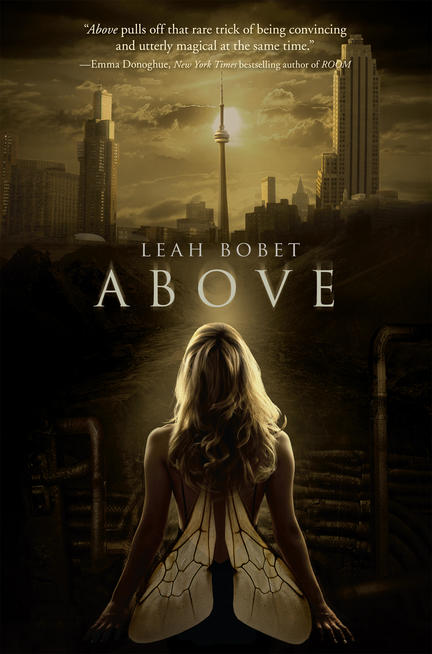 "ABOVE pulls off that rare trick of being convincing and utterly magical at the same time." - Emma Donoghue, NYT bestselling author of ROOM

"Leah Bobet's ABOVE is that rarest of creatures, combining the outspoken honesty of a good first novel with the craft of a seasoned professional." - Elizabeth Bear, Hugo Award-winning author of DUST

Matthew has loved Ariel from the moment he found her in the tunnels, her bee's wings falling away. They live in Safe, an underground refuge for those fleeing the city Above--like Whisper, who speaks to ghosts, and Jack Flash, who can shoot lightning from his fingers.

But one terrifying night, an old enemy invades Safe with an army of shadows, and only Matthew, Ariel, and a few friends escape Above. As Matthew unravels the mystery of Safe's history and the shadows' attack, he realizes he must find a way to remake his home--not just for himself, but for Ariel, who needs him more than ever before.

ABOVE is the debut of an amazing new voice.

Leah Bobet's short fiction and poetry have appeared in Realms of Fantasy, Strange Horizons, The Year's Best Science Fiction and Fantasy for Teens, and nominated for the Pushcart Prize and the Rhysling Award. She received a 2008 emerging writers' development grant from the Toronto Arts Council. She lives in Toronto, Ontario.

Matthew has loved Ariel from the moment he met her. They live together in Safe, a refuge deep underground for those fleeing the harsh city, Above. One night an army of shadows invades Safe, and Matthew, Ariel and a few friends escape to Above. Matthew tries to unravel the mystery of the shadows’ powers and Safe’s secret history while he finds a way to remake Safe.