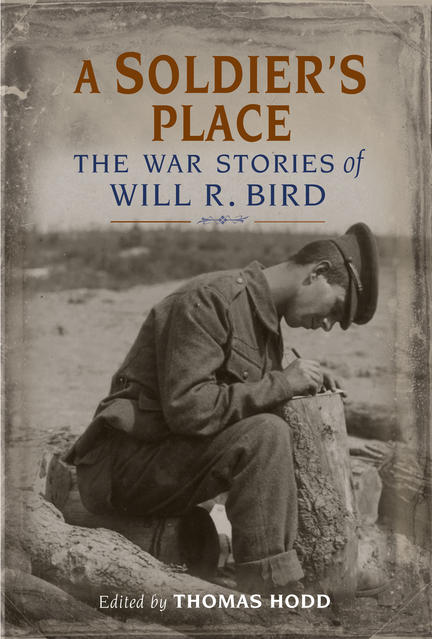 For two decades following the First World War, Nova Scotia-born Will R. Bird published war stories in magazines and periodicals, which have gone out of print and were never digitized, and the stories had long fallen into obscurity—until now.

Carefully curated by author and editor Thomas Hodd, A Soldier's Place is an anthology of fifteen of Bird's best combat stories, based on the experiences of himself and of others, covering all aspects of the war effort and following brave Canadian, American, and Australian soldiers.

An infantry soldier, Will R. Bird miraculously survived the First World War and became one of the most prolific Canadian authors on the subject, completing both fiction and non-fiction works.

Thomas Hodd is an Associate Professor of Canadian and Atlantic literature at Université de Moncton. His essays and reviews have appeared in the Globe and Mail, the Literary Review of Canada, The Chronicle Herald, the Toronto Star, and Studies in Canadian Literature, among others. He is co-Editor of The Antigonish Review and author of #NOMORENOTES (Anstruther, 2016). His study of Charles G. D. Roberts’s writings on the First World War appeared recently in The Great War: From Memory to History (Wilfrid Laurier UP, 2015).

Born in East Mapleton, NS, Will R. Bird (1891-1984) served with the 42nd Highlanders during the First World War. After returning to Canada, he embarked on a writing career that spanned several decades. Best known for his historical fiction and war writings, especially his soldier memoir, And We Go On (1930), Bird published more than twenty books and several hundred stories, including a handful of non-fiction works about the Maritimes. He also spent many years working in various Nova Scotia government departments, and served briefly as president of the Canadian Authors Association.

Other titles by Thomas Hodd

The War Stories of Will R. Bird

The Heart of Ancient Wood

Other titles by Will R. Bird

And We Go On

A Memoir of the Great War

A century after the end of World War One, we're still not done telling stories about this historical event.